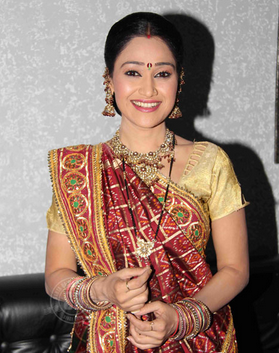 Disha Wakani, the garba queen of Taarak Mehta Ka Ooltah Chashmah TV serial aired on SAB TV is an Indian actress who appears in TV serials and has also appeared in Gujrati stage shows and acted in some Bollywood films and TV commercials. She is popularly known as Dayaben, aka Daya Jethalal Gada because of the role she portrays as a chirpy voiced and funny housewife in the popular comedy series Taarak Mehta Ka Ooltah Chashmah of SAB TV. She is paired opposite Dilip Joshi who is portrayed as Jethalal Gada. Their onscreen chemistry is the USP of serial and well appreciated.

She started her career as a stage actor in popular Gujrati plays like Kamal Patel v/s Dhamal Patel and Lali Lila. She has acted in small roles in films like Devdas and Jodha Akbar and several other films. Among TV serials, she has also appeared in guest appearances in Khichi, Kaun Banega Crorepathi 4, Indian Idol 5. She has won many awards mainly for her comic role in Taarak Mehta Ka Ooltah Chashmah.

Disha is born on 17 September 1978 in Gujarat to Bhim Vakani who is a noted Gujrati theatre personality. After her schooling, she graduated in the Dramatic arts from Gujarat College in Ahmedabad. She has a brother named Mayur Vakani who also plays a role of her brother as Sundarlal in Taarak Mehta Ka Ooltah Chashmah.