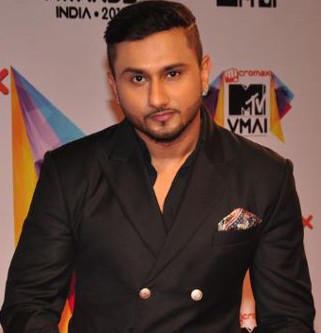 Hirdesh Singh, aka Honey Singh, popularly known as Yo Yo Honey Singh is an Indian rapper, music producer, singer and film actor. Singh is shaking the music world with his out of the box lyrics and controversial words in songs.

He started his music career as a recording artist and then eventually became Bhangra producer and even begun to produce for music for Bollywood films. He is also a good mimicry artist and DJ, learning DJying from DJ Vishal. His songs are very famous in Bollywood industry with songs like Angreji Beat in SAif Ali Khan’s film Cocktail, lungi dance and The Thalaiva in SRK’s film Chennai Express, Title track and Party All night in Akshay Kumar’s Boss, Rani Tu Mein Raja in Ajay Devgan’s Son of Sardaar, Party on My Mind in Saif Ali Khan’s Race 2, ABCD and Sunny Sunny in Divya Khosla Kumar’s produced film Yaariyan, Horn Ok Please of Naseeruddin Shah/Madhuri Dixit and Arshad Warsi’s Dedh Ishqiya among others. He is reportedly the highest paid Bollywood singer, being paid INR 7 million (US$110,000) for a song in the films “Cocktail” and upcoming “Mastan”. He has given music and sung in Punjabi and English also and prefers to sing in his native language Punjabi the most.

Honey Singh has also acted in Punjabi movie Mirza as wannabe gangster Deesha and appeared in the Punjabi comedy film Tu Mera 22 Main Tera 22 as Rolly along with Amrinder Gill.

Singh was born on 15 March 1983 in Hoshiarpur, Punjab. He studied music at the Trinity School in the United Kindgom. He is from a commerce background. His parents live in Delhi’s Karampura area. Singh is currently living in a plush house in DLF Gurgaon. He likes driving cars and also liked riding bikes on the roads of Delhi. Singh is married; though he earlier denied it, but recently agreed that he is married.