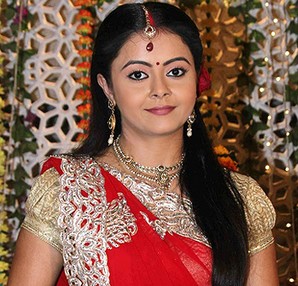 Devoleena Bhattacharjee, the obedient Gopi bahu of Star Plus TV series Saath Nibhaana Saathiya is an Indian television actress.  She started her acting career via a one-act drama competition followed by lots of plays and theatres in Assam.  Devoleena did Jewellery Designing and Development course from NIFT, New Delhi and was working for GILI, MIDC Mumbai when she was offered a role in Colors TV show Kudesan, but the show was scrapped due to channel’s policy changes. She then got a role in NDTV Imagine’s show Sawaare Sabke Sapne Preeto as Bani, sister of protagonist Preeto.

Currently, she is acting in Star Plus TV series Saath Nibhana Saathiya as Gopi. Gopi was being played by Giaa Manek, but she left the show to participate in Jhalak Dikhhla Jaa 5 and Gopi’s role went to Devoleena. Her strong and passionate acting as Gopi is well received by the audience now. She has also participated in reality show Dance India Dance (season 2) as contestant. She won Best Actress-Drama (Popular) for her role as Gopi.

Devoleena was born on 22 August 1990 in Sivasagar. Assam, India in a Bengali family.  She did her schooling from GBME School, Sivasagar. Assam and graduated in Commerce with Accountancy Honours.  She  learnt classical music (Bhatkhande) at an early age.  She also learnt Bharatanatyam from Kalakshetra, Chennai.  She has 2 younger brothers.  Her mother is her main inspiration for pursuing a career in entertainment industry.