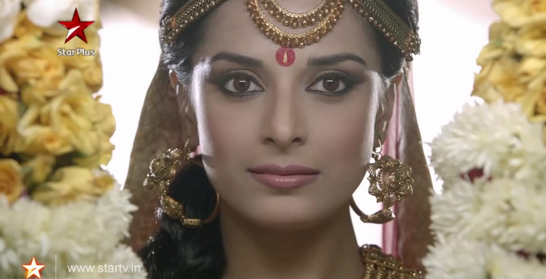 While Drupad see off Draupadi with a heavy heart, after Lord Krishna explains him that he has to do her Bidaai and send her with his husbands. Draupudi talks to Lord Krishna about the Adhram she would be doing living with five husbands. He asks her why did she agree for this adharm. She says she said yes for it, thinking about Kunti Maa, to keep her words and for the happiness of the Pandavas. Lord Krishna tells her if you are thinking about everyone’s happiness and respect then it can’t be called Adharm, lighten your heart and go ahead with your marriage.

Draupadi’s Bidaai is done. She is brought to the Hastinapur palace by Kunti and her sons. Dhritrashta is unhappy the way Duryodhan is manipulating things for getting the crown. He says that his son never understood his love and affection. As Dhritrashta is about to crown Duryodhan as the king of Hastinapur, Bhishm stops him in the nick of the time saying the righteous kings have arrived. He tells them that Kunti and her sons have entered the palace. Duryodhan and Shakuni are shocked. Gandhari is happy to welcome Arjun’s bride. She asks Kunti where is Arjun’s wife. Kunti and the Pandavas can’t keep the truth to themselves. Bhishm, Vidur, Duryodhan and his parents are shocked to know about this first ever heard and strange marriage of the Pandavas. What will Duryodhan do now? Will everyone accept Draupadi? Keep reading.