Salman receives a call from his Abbu. Iqra takes a sigh of relief as she thought it is Khalid’s call. Salman asks Rafia to make tea. Phone rings, Rafia picks the call. This time around it is Khalid’s call. Rafia picks the call but he doesn’t speak. He calls again. Rafia asks Iqra to pick the call as she is making tea for Salman. Iqra picks the call. Khalid tells her that he is waiting for her and asks her to come to the balcony. Iqra says, I won’t come. Khalid says, then I will come inside your home. Iqra comes to the balcony after Salman goes to her room. Khalid gets happy and thinks Iqra is burning by love. He leaves. Rafia asks, where were you? Iqra makes excuses. Rafia asks her to take rest.

Safia looks at Ali and says I am thinking how I will live alone after you leave for London. Ali says, but I have to go. There is no one for us. Safia says, I want to see your future secured. Ali says, that’s why I am going. Safia says, I wish I have a bahu. Ali says, we don’t have money for marriage now. Safia asks him to eat the food and goes to dry her clothes. Ali is eating and thinks about Alisa. Safia screams in pain. Ali rushes to her. Safia says, my bone is broken. He takes her to the hospital. Alisa and Zainab come to her and says we will come if you need any help. Zainab asks Ali to call them. Zainab tells Alisa to make soup for Safia.

Bhai Miya asks about Alisa. Zainab says, she went to Safia’s home. Bhai Miya praises Ali and Safia. He asks her to give monetary help to them if they need. Alisa compliments Adi for keeping the kitchen clean. Ali goes to get the bowl. She cook the food. Ali says, everything is heading fast. Alisa says, everything look good with time. We should not hurry. She asks him to eat the food. Safia comes. Alisa asks her about the pain. Safia says, it is still paining. Alisa changes the clothes of Safia. Ali tells Alisa that he will drop her home. Alisa asks, can you leave me? Ali says, I don’t think so. Ali says, we can go out if you wish. Alisa says, I know you are joking. Alisa says, I shall leave. She leaves. Ali looks at her smilingly…….Kisay Apna Kahen Plays……………………. 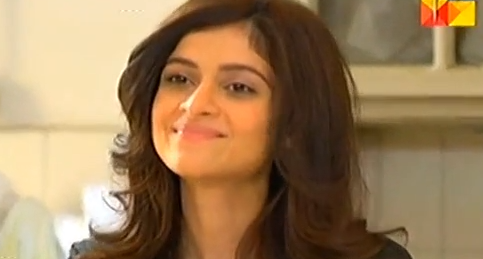 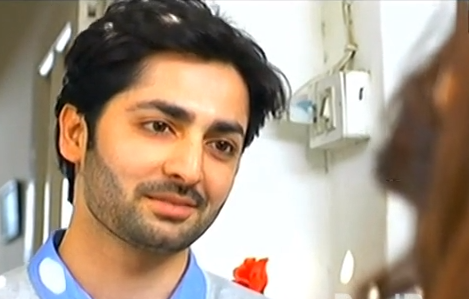 Iqra is standing on the terrace and recalls Khalid (Aamir). She hears the phone bell and goes to pick the call. It is Khalid’s call. He says, I am Aamir. Iqra asks, what do you want? Why don’t you leave me? Khalid says, I know you are awake as I am awake here. Iqra says, don’t trouble me…..Khalid says, I know you are living a helpless life. Your husband doesn’t fulfill your needs and wishes. Iqra says, I am talking to you by keeping stone on my heart. Khalid says, my destiny is hiding beneath that stone. Iqra disconnects the call. 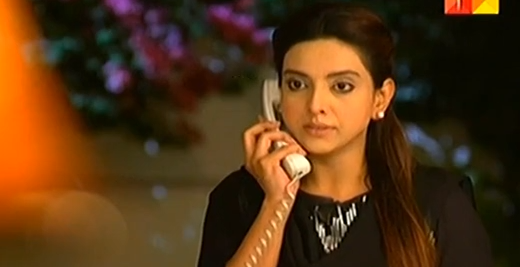 Laiba tells Maheen that teacher asked her to bring new book. JD tells Phuphu to see his condition. Phuphu taunts him. JD says, I am paying rent for my own car. Maheen tells Laiba that she will get her a new book. Maheen asks JD to drop girls to the school. JD says, he won’t and taunts Maheen. Maheen says, I will drop them. Maheen asks her daughters to say salaam to Dadi. Phuphu bless them.

Ali asks Alisa, what you are cooking? Alisa says I am making Yekni (gravy) for your ammi and your favorite dish for you. Ali asks, do you know about my preference? Alisa says, I know everything. Your ammi told me everything. Ali says, Ammi knows everything. He gives her chocolate. She thanks him. Alisa says you can’t ignore any of my dishes. Ali says, you don’t know anything about me. Alisa says, I am your friend, not your ammi. Ali thanks Alisa for the timely help. Alisa says, it was our duty. She asks, are we not related to each other? We are neighbours and friends. Ali says, we love you very much. Alisa says, we may need you tomorrow. Safia praises Alisa. She says, Zainab has given her good values. She says, I wish I had a daughter. Ali says, why you are sad. I do every work naa. Safia says, you are my lovely son. I am living life by seeing you. Ali goes to make tea for her.

Iqra is changing Salman’s pillow cover. Salman comes and insults her. He says, you can’t imagine how much I hate you. You killed my Iqra. I hate you very much. I hate you, your presence and your face. I will take revenge. You will die every moment. You will ask for death but it will not come. I hate you forever. Iqra gets hurt. 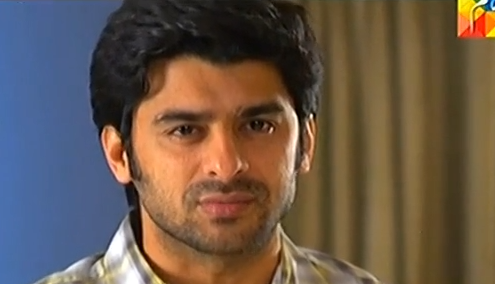 Ali recalls about Alisa and smiles. Alisa explains Ali about cooking soup. Ali stares at her smilingly. Ali says, I love you……………Alisa turns and asks, what? Ali says, I seriously love you. Alisa asks, what do you mean? Ali says, I don’t know what is happening with me. I was trying to hide my feelings but it is the truth that I love you. Alisa says, we are friends and I didn’t expect this from you. She gets upset and leaves.

JD comes to Khalid. Khalid makes him remember about the condition of rent for the car. JD gives him 600 Rs. JD says, lets play. Khalid says, I won’t play for less money. I will play for the big time. JD says lets play then. Khalid says, I am waiting for destiny game. Alisa thinks about Ali’s confession of love. Zainab says, I went to Safia. She is fine now. Alisa asks about her. Zainab asks her to give food to Safia. Alisa says, I am not well. Zainab says, let it be. Zainab take care of Safia. Safia thanks her. She asks about Alisa. Zainab says, she is busy with house work. Safia blesses Alisa. Zainab says, I will go now. Ali looks sad.

Sayeed explains to Iqra that parents never take any wrong decisions for their kids. They want better future for their kids. We didn’t think like that nor your parents, circumstances was wrong. We realize our mistake. We feel pain to see you like this. Rafia says, we tried to bring happiness in Salman’s life. Sayeed says, it is very sad that Salman doesn’t behave properly with you. Iqra says, I want to know my mistake in this. Sayeed says, we are at fault. We have forced Salman to marry you even after knowing about his love for other girl. Rafia says, we thought everything would be fine. Iqra says, you should have told me before. Sayeed says, that girl’s background was not good. Iqra says, when I left home, I have seen a spark in my parents’ eyes. I couldn’t hurt them. I can’t take any wrong decision. She says, I will not tell anyone. Rafia says, you can win Salman’s heart. He isn’t bad at heart. Iqra says, I hope so. Sayeed says, you will….. 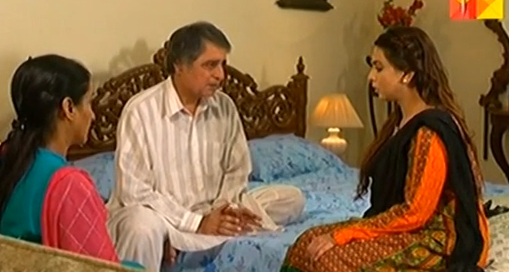 Shanze tells Zainab that she is leaving for University. Alisa says, I will also accompany you. She tells Zainab about her result day. She says, I will come back in an auto. Ali is feeling bad as he couldn’t see Alisa after his confession. Alisa’s auto is stopped on the road. Alisa is standing on the road. Ali comes there. Alisa says, I will go once my Rickshaw repairs. Driver says, it will take much time. Ali says, if you say then I will drop you. Alisa says, I can’t come with you. If anyone sees me with you then it will be a problem for me. Ali asks her to come with her. Alisa sits on Ali’s bike. Bhai Miya is sitting at the garage. The mechanic sees Alisa on the bike with Ali. He tells Bhai Miya. Bhai Miya turns and sees them. Alisa gets down the bike and is shocked to see Bhai Miya. 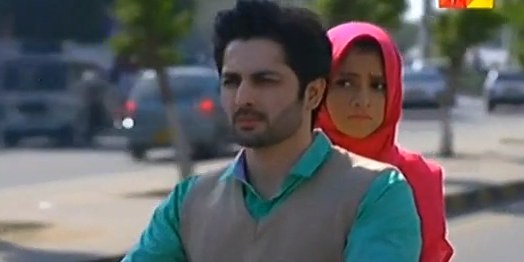 Next Episode:
JD tells Maheen and Phuphu about Alisa’s affair with Ali. Phuphu says, I knew it. Ali tries to clear the misunderstanding but Bhai Miya asks him not to come in his way again. One lady brings proposal for Shanze. Zainab says, my elder daughter Alisa needs to be settle down first. Lady says, don’t talk about her. Everyone know about her affair. Alisa hears it.