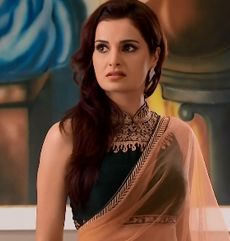 Laxminandan is still in ICU and is in coma. Even then his wife Ghuman is no way settling to sad looks. She still sets the trend with her amazing attire and a sexy smile. and and Well, we have many doubts about Kabir. Firstly, who is he and what rivalry he has with Laxminandan. Secondly, is Kabir inclined towards Ghuman? The way he was staring at the drawing on which Ghuman laid her shadow. His smile has more to it than he showed. We heard Ghuman will be using Kabir against Kumud and Saras. Kabir is shown helping the Vyas and Desai families intentionally to get their support and win their trust. He sends some goons to beat Danny and also fools Saras by acting like he is beaten up by the goons, so that he can land in Saras’s house.

Maybe Ghuman brought her new fiddle, and it may also be that Kabir would be related to Saras in some way. It has to be seen about his real identity. The latest promo shows some stupid scene between Ghuman and Kabir, which makes us think what are they upto. In the upcoming episodes, Ghuman will be joining Kabir and plan against the Desai house. She is unaware that he is the one who has hit Laxminandan. Is Kabir dangerous for her too? Or is Kabir really Ghuman’s working hand? Keep reading.