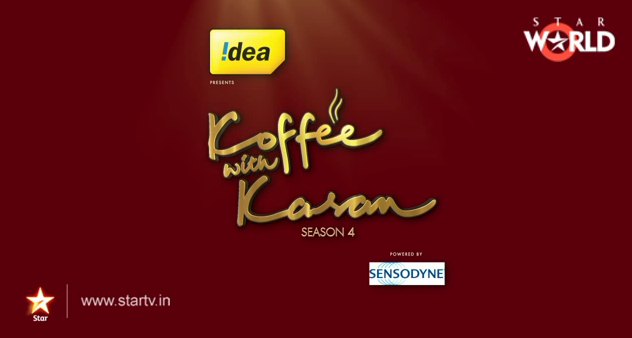 Karan starts with his line My couch always sizzles when I have two leading ladies together. His first guest is one of the finest actresses of her times, with amazing comic timing, the beautiful Juhi Chawla.
Karan: It took me eight years to bring you on this couch.
Juhi: I want to know why.
Karan: I made Madhuri and you come together today. You have been a celebrated movie star, are you happy with what you are today.
Juhi: Yes I am, but I won’t stop working, I will work till I drop dead. 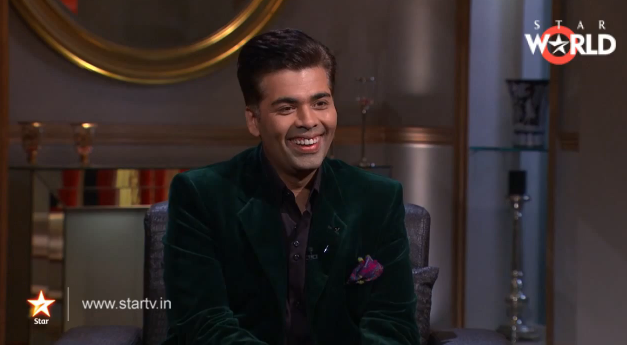 Karan: Some of your fights have been legendary, your fight with Aamir Khan, you are his friend and some day one silly incident changed that. Whose ego was bigger?
Juhi: I think one day it went a little too far, on the sets of Ishq. The prank was played by Ajay too. He looks straight but is not. They both were bullying me together. It took it a bit badly and next day I did not go to work. Aamir really gone mad for that. We did not speak to each other for 4-5 years. 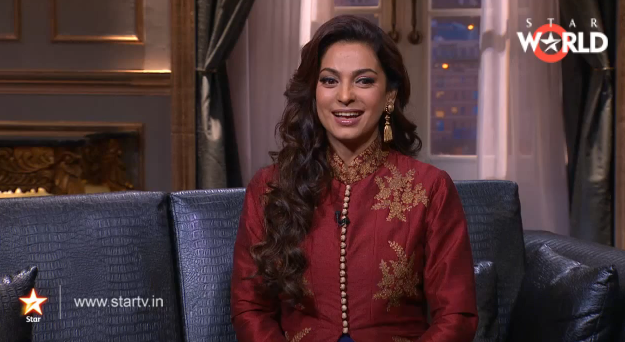 Karan: You were actually an affable movie star. You have a strong connect with Aamir and Shahrukh, but why did Salman not work with you.
Juhi: Even I want to know. I never worked with Salman.
Karan: Do you believe that you can’t be friends with your contemporaries? What was your vibe with Madhuri? I heard there was a cold vibe between you and two.
Juhi: There was no animosity. There was always comparisons in the number game, but when we met, it was not that bad.
Karan says lets call her and find out whats dynamic between Madhuri and Juhi. Karan welcomes the ‘Born to be movie star’ Madhuri Dixit.
Karan: Pretend to be friends now.
Madhuri: Absolutely, thats for the show is on.

Karan: What was the buzz about you two true?
Madhuri: That was unnecessary hype, whenever we met, we greeted each other, but we did not had time to become friends.
Karan: Were you aspiring with each other’s image?
Juhi: I used to work out and reach to her, I tried but I could not.
Madhuri: For me it was not like working hard.
Karan: Do you think Juhi is fabulous in every film?
Madhuri: Absolutely.
Karan: You have done a lot of films with Shahrukh and Aamir.
Madhuri: Yes, a lot. 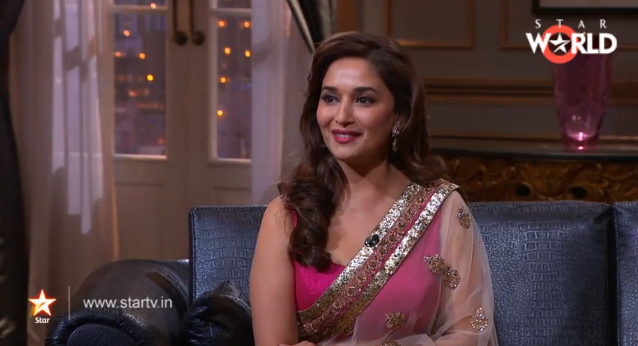 Juhi: Before we started shooting, the director arranged the meeting of her and me, he left us alone for few minutes.
Madhuri: We got to know each other.
Juhi: We were working to rise to a top heroine, I did not want to do Dil To Pagal Hai. I did Darr with Yash ji and when I came to know that Madhuri is having a role in that film and I was asked to share a space, I did not want to become second in the film, that was not a clever decision.
Karan: Everybody thinks different.
Juhi: I was shocked when they came to me with Gulab Gang, the script was edgy, crisp and the role was totally negative. I said what made you think I m going to do this. Later on, I looked at it differently, it was be most interesting to do this role. Madhuri is playing the hero in the film and I m playing the villain, so it will work.
Karan: Why did you both not marry a movie star?
Madhuri: My husband is my hero.
Juhi: I don’t think I could handle my husband looking in the mirror more than I do.

Karan: What about the dynamics in the movie industry today?
Madhuri: Now it’s a bigger community. First, there used to be a single designer. Today it’s a lot more. Media, social network, everything has increased, it is like a real industry now.
Juhi: It makes everything more efficient.
Karan: Do you all keep in touch with Tabloids, do you know who is dating who. If I ask you who is Ranveer Singh dating, do you know.
Mahduri: I don’t have any idea.
Juhi: I also don’t know.
Karan: Ranveer Singh is dating Deepika Padukone.
Karan: Do you know who is Ranbir Kapoor dating?
Madhuri: We just heard, Katrina.
Juhi: I agree with her. 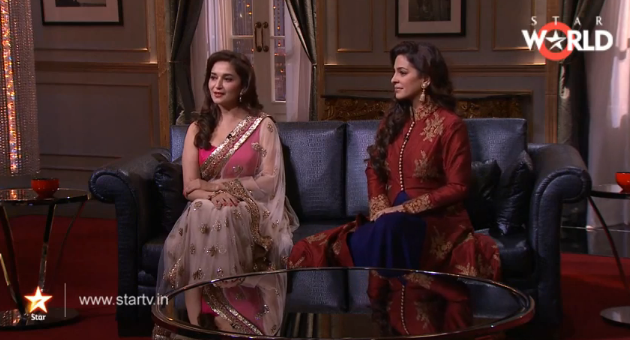 Karan shows them an AV with hot looking male actors who are the young guns of the movie industry. Ranbir Kapoor , Arjun Kapoor, Imran Khan and Ranveer Singh.
Karan: How do you feel when young boys lust for you now?
Madhuri: Very flattering, wasting your time and my time.
Juhi: She answered from both of us.

Karan starts the rapid fire round with Madhuri.
Karan: What is the one thing which Juhi has and you don’t?
Madhuri: Dance.
Karan: Which young actor would you want to do a romantic film with, Ranveer, Ranbir or Imran?
Madhuri: Ranveer.
Karan: Rate the following people on dancing skills. Katrina Kaif, Hrithik Roshan, Priyanka Chopra, Ranbir Kapoor, Deepika Padukone, Shahid Kapoor.
Madhuri: 9, 100, 8, 10, 8, 9
Karan: A rumor you want to spread about yourself?
Madhuri: That I m doing a Karan Johar’s next film.
Karan: If you were stuck with Salman and Shahrukh in a lift, what would you do?
Madhuri: I would disappear.
Karan: I will name three male actors, they can be your brother, husband and friend, Salman, Shahrukh and Aamir.
Madhuri: Salman – brother, husband – SRK, Aamir – friend.

Karan says lets fine out how Juhi answers, then we can get the winner.
Karan: If you could change one think about your husband, what would it be?
Juhi: His hair.
Karan: If you were to make a debut today, which current actor you want to be act with.
Juhi: Ranbir.
Karan: One thing you don’t have which Madhuri has?
Juhi: American accent.
Karan: Husband, brother and friend, same three actors, Salman, Aamir and Shahrukh
Juhi: I will settle for the same combination.
Karan: An overrated film?
Juhi: Kai Po che.
Karan: Who would you think would star in the Hollywood remake: A 40 yr old virgin?
Juhi: Sitting infront of me.