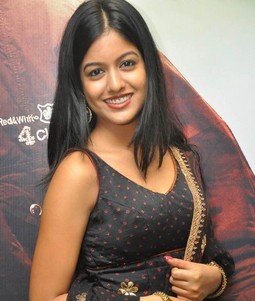 Ishita Dutta, the bubbly and pretty looking Poonam of Star Plus teleseries Ek Ghar Banaunga is an Indian television and film actress. She started her acting career with a lead role in Telugu film Chanakyudu follwed by Kannada film Yenidu Manasali.

Currently, she is playing the role of Poonam Akash Garg in the Star Plus teleseries Ek Ghar Banaunga opposite Rahul Sharma as Akash Garg. Her character as a high-spirited girl helping her parents and her in-laws is well-received by the audience. Her on-screen chemistry with co-star Rahul Sharma is also the main USP of the show and its high TRPs.

Ishita is born in Jamshedpur, Bihar into Bengali Hindu Kayastha family. She is the younger sister of Bollywood actress Tanushree Dutta. According to the sources, Ishita Dutta is dating her Ek Ghar Banaunga co-star Rahul Sharma.