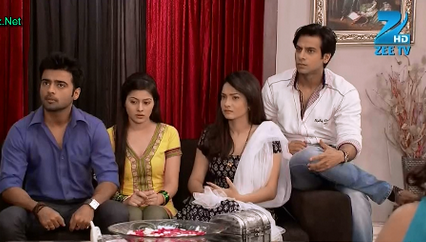 Naren made his family accept Ankita and took her home. Ankita and Naren are happy with each other. Soham comes and returns the money which Naren had given him for his help in cracking Mansi’s case. Naren thinks of getting Mansi settled. He brings Ankita to Soham’s house. He tells Mansi that she shall marry Shashank soon. Mansi refuses to marry Shashank as his parents are against the marriage. Naren thinks to set everything right in place.

Naren takes the help of Media to convince Shashank’s parents. He tells the journalists that Shashank’s parents are accepting Mansi even after the trauma which she went through. He says, peoples’ mentally is sick as they treat the rape victim badly but these people (refers to Shashank’s parents) have accepted Mansi as their would be daughter in law. He praises them. He asks Shashank, will you marry Mansi? Shashank says yes. Shashank’s parents are forced to accept Mansi because of the media pressure. Stay tuned or keep reading on Mansi’s front.