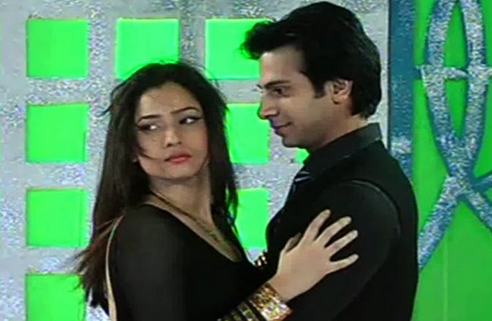 Ankita wants to see Naren fine and don’t want anyone to call him mad genius. Naren gets an attack during the havan, where in Kinnari spills hot water on Ankita’s hand. This makes Naren go out of his mind. Doctor comes and gives him injection to calm him down. Ankita seeks Doctor’s opinion. Doctor suggests Hypnotic relaxation therapy (HRT) and tells her that they have already done the experiment on Naren once, but Rushaali stopped the experiment midway seeing Naren’s worsened condition.

Ankita talks with Rushaali and tries to convince her to give a go ahead for the experiment. Rushaali doesn’t want Naren to lose his mental balance further and refuses to support Ankita. Sunanda intervenes and asks Rushaali to let Ankita go ahead with the experiment.Ankita thanks Sunanda.

Ankita convinces Naren to agree for the experiment. Naren agrees as she trusts Ahana very much. Hypnotic session starts. Naren closes his eyes and recalls his meeting with Ahana. He tells the doctor about the same. He then tells about the car on fire and says he couldn’t save his Ahana. He gets hyper and gets unconscious. Ankita shouts. Rushaali blames Ankita for Naren’s worsened condition.

Experiment on Naren failed. Rushaali accuses Ankita and asks her to leave the house. Ankita decides to leave the house. Sunanda stops her. Ankita feels bad as she couldn’t help Naren get well. Naren’s condition gets worse and he is seen tied on the bed. Ankita comes back and sees her husband’s condition. She feels pained. What will happen to Naren? Will he get fine? Stay tuned or keep reading tellyreviews.com.