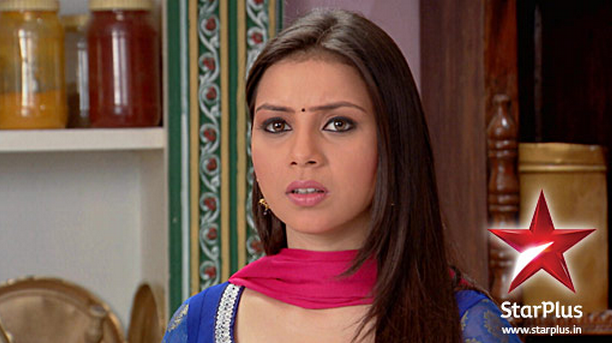 Chavi plays a stupid trick of hiding the Lahenga which Dilip’s mum brings for her. She does so as she does not like the old lahenga and wants a new branded one. Dilip’s mum had a dream to give it to Chavi as she wore it in her marriage and it was given to her by her mum in law. She wants to take the tradition ahead. Chavi does not respect her emotions and is annoyed with Dilip. She asks Dilip to hide the lahenga in his room and not tell anyone. She asks him to buy a new one for her from the shop which she tells him and she sends him the photo of the lahenga which she likes.

Dilip agrees with her as he loves her a lot. He does not think it’s a big deal. He does not feel his mum will be much hurt by Chavi’s act. Chavi tells Bhabho that the lahenga is stolen and she wants a new one. Bhabho is embarrassed infront of Dilip’s mum and apologizes to her. Sandhya feels bad and decides to find the lahenga. She finds Chavi in Dilip’s room and catches her red handed. Sandhya scolds Chavi and asks her to realize her mistake. Meenakshi’s mum makes Dilip’s mum know the truth that Chavi has hidden the lahenga and has hurt her sentiments.

Dilip’s mum is annoyed and thinks if the girl has go to this extent before marriage, then after marriage she can break my house. She decides to call off the marriage. Sandhya talks to her and asks her to let the marriage happen as Dilip and Chavi like each other. Sandhya makes Chavi wear the old lahenga and cools Dilip’s mum’s anger. The marriage proceeds after the huge drama, thanks to Sandhya.