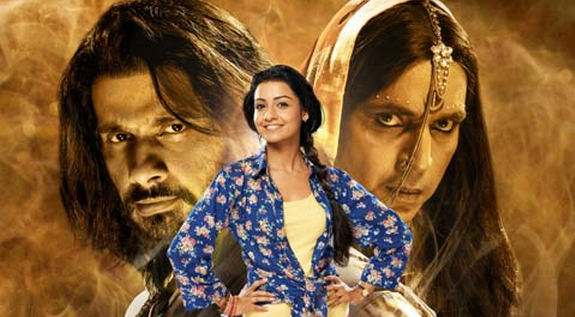 On the Holi Celebrations, Rudra Pratap (Kalavati) drags Mrityunjay from the jail with the help of kinners. He takes him to the jungle. Tara is also brought there. Rudra Pratap tells Tara to be a witness of Mrityunjay’s death. She shouts for help and asks him to leave Mrityunjay. She pleads him but Rudra says he wants to play the holi of blood and enjoy the red color. Rudra is evil soul dealing with non acceptance of his being Kalavati truth. He kills his own father also telling him that he is not his son, but his daughter.

His father is unable to accept it. Rudra suffocates him and Daddu dies on the spot. Rudra fights with Mrityunjay but his goons beat Mrityunjay and capture him. Tara looks on how Mrityunjay is hanged and is beaten up by stones. She runs to hold his body and cries miserably. She shouts on Rudra saying he has killed her Mrityunjay and she will not leave him and bring his truth infront of everyone.

She comes home and tells everyone that Rudra killed Mrityunjay. No one believes her. Rudra asks Tara to kill him to end the hatred and gives her a gun with fake bullets. Tara shoots at Rudra and everyone are shocked. Everyone scold Tara for firing at Rudra. Rudra is alive and smiles cunningly. Tara does the final rites of Mrityunjay and tells Rudra that she will not immerse his ashes in Ganga till she brings out his truth. She tells him she will take revenge of her husband’s death. Will Tara succeed? Will Kalavati’s truth comes out? Keep reading.