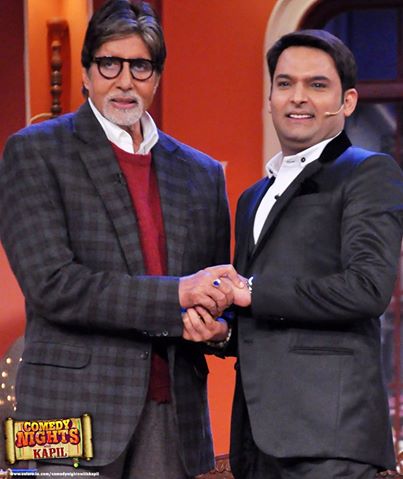 Prank on Raju-the servant is revealed:

Continuing from 5th April’s epsiode when Raju-the servant is seen apologizing to Sr. Bachchan as he became annoyed with his language and words. This episode starts with Sr. Bachchan and Kapil is seen laughing on Raju as a sign to express their prank which has been set-up by both of them and can be seen as an April fool. After seeing this, Raju realizes that everything from Sr. Bachchan was acting, and takes some time to come up with that reality by drinking water and again reiterates to them that he actually thought that Sr. Bachchan was offended by his language. Finally, he leaves from there with a smile by taking blessings from the legendary actor.

Sr. Bachchan recounts about a prank that he and other actors did on a fellow junior artiste during the shooting of a movie – Naseeb directed by Manmohan Desai. The prank was made on a junior artist by another artist and they planned it well. The junior artiste finally knew about the prank though it took him some days to realize it.

Mrs Sharma’s (Sumona) brother played by actor Paresh Ganatra comes with her. They meet Sr. Bachchan and Paresh is seen dressed as Shahensha. Sumona asks Sr. Bachchan how did he proposed to Jaya mam..He replies that there was no proposal and during their shooting for a movie Zanjeer all the friends decided to travel abroad -London if the film becomes a hit. In this context, he went to take permission from his parents for travel who in turn set one condition that he can go with his friend Jaya only if he is married with her. Hence, he married her.

Kapil cracks some jokes on Mrs. Sharma’s father and brother and after some time both of them leaves.

Kapil asks Sr. Bachchan – You have seen many up and downs. Which phase you like the best, As a son, father, grandfather?. He replies that all have different qualities, but if to choose one then grandfather will be his choice. Boman comes back after spending some time with Bua.

Kapil speaks with Boman Irani asking him – How does he prepares for a character, role ?
Boman says that he always take details and observations from many different things and characters, and then applies that learning in his preparation for the character.

Audience speaks: An old women from Sweden also expresses her love to the actors.

Audience: A lady requests Boman to sing a song. And he gracefully accepts it and sings the song, Sari umar hum mar mar je liye…ek pal to hame jeene do… Na Na from the movie 3 Idiots entertaining the audience. Boman then leaves thanking Sr. Bachchan for sharing screen space with him.

Audience: A man named Shroff, speaks how much a die hard fan he is of Sr. Bachchan and shares his own experience of the time when Sr. Bachchan had suffered injury on the sets of Coolie. Inspite of being very young at that time, around 11 years, he made up his mind and went to the Breach candy hospital for giving his blood and helping Sr. Bachchan. Everybody appreciated his die-hard liking to the actor at that young age.

Audience: Requests both Kapil and Sr. Bachchan to sing a song.- mere angne me tumhara kya kaam hain. Sr. Bachchan agrees and starts singing the song -mere angne mein tumhara kya kaam hain.. from the movie Laawaris (1981). Audiences join them on the stage and dances while he is singing amazingly well..Also the old Swedish woman comes and dances with them when – jiski bhi gori part of the song is sung..He hesitates on singing – jiski bhi choti.. but eventually sings..

Kapil then sings.. Rang barse bheege chunar wale. from the movie Silsila (1981). Sr. Bachchan gets a standing ovation from the audience for his spirited singing.. Daadi comes on a Jumma Chumma De De song from the movie Hum with a bang, and upon Daadi’s request for a drunk scene, he agrees and enacts a drunk scene from the movie – Amar Akbar Anthony. Daadi praises him and Sr. Bachchan tells everybody that drinking is bad. He then asks Sidhu on his eloquent statements that are always spontaneous. Finally, Daadi urges him for a kiss (shagun ki pappi) and he kisses her to her disbelief. Daadi and Kapil thanks Sr. Bachchan for coming on the show and Kapil wishes him the best for his movie – Bhootnath Returns which releases on 11th April 2014. Sr. Bachchan informs everybody about Kapil’s birthday and all of them celebrate his birthday. He also gives an autograph on a photo frame with Kapil’s sketch and presents it to Kapil as his birthday gift. 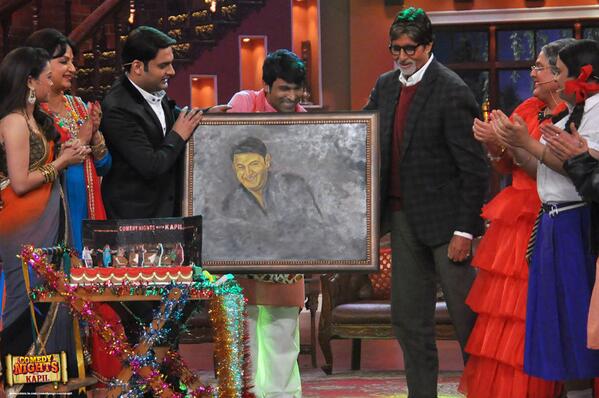 Next week Guests:
– Rajat Sharma of Aap ki Adalat fame comes on the show, and is seen cross-examining Kapil and pulling his leg.