Kapil starts the show and plays the role of an aspiring politician (Bittu aka Sittu) since working as a goon is a flop business. Sittu says that he is standing in this elections.

Bua comes in to meet Sittu, he asks her does she know the election commission.. Bua doesn’t know election commission and relates it to the flat commission that people get if they sell a flat. Paresh dons the role of an election public officer to know Sittu’s character. Sittu instructs his family to tell good things about him. The officer comes in to take an inquiry for which they don’t know what’s an inquiry is, The officer asks what they will do for elders ?, Sittu responds that he will pray for them. When the officer asked, what will they do for the children ?. Sittu again replies that he will think on marriage and do family planning.. Sittu and Bua becomes agitated with the officer and also threaten him to give them their ticket. On the contrary, they receive a railway platform ticket from the officer and it turns that it was actually a prank made by him on Sittu’s family as he had made a promise to drink tea at their home. Sittu tells that nobody gave him the ticket even at a birthday party, then he went to a political party and even there his efforts were futile. 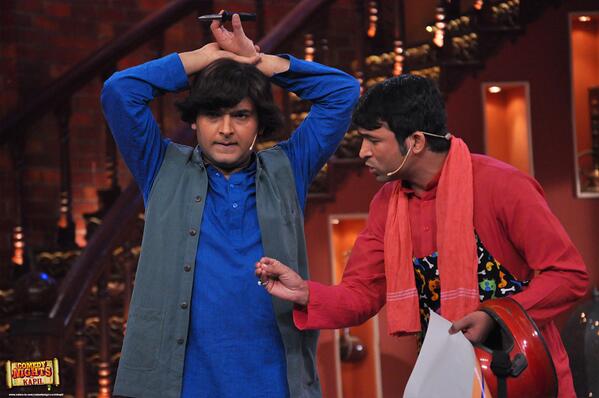 Daadi comes in with two old men – Lala and Chaddha. Lala introduces Chaddha as the young and vibrant leader.. Sittu makes a joke on Lala and Chaddha’s introduction of Lala. Lala promises to open a school if he wins.. Later, some people comes in there and informs them that the elections are already over, Sittu and Lala are surprised on hearing this as they were eagerly preparing to stand in the elections. When Bua asks Sittu citing that elections have ended, what will they do ? Sittu and Daadi responds by dancing on the Havan karenge song from the movie Bhaag Milkha Bhaag. Stay tuned to Comedy Nights with Kapil tonight at 10 PM IST on Colors.