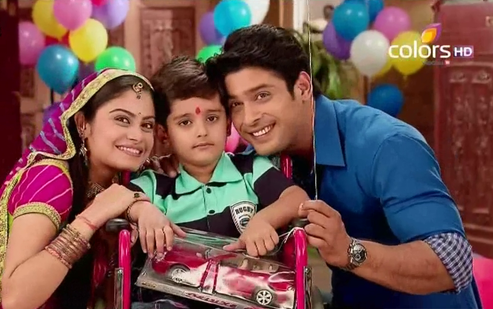 Anandi and Shiv’s adopted loving son Amol was kidnapped by the beggar’s clan who was taking revenge on Anandi. The woman beggar named Amma holds Anandi responsible for the loss of her business as Anandi had freed some kids from her grasp and thereby lessen her begging business. She makes plan to kidnap Amol and teach Anandi a lesson. She plans to make Amol beg for her and earns money for her livelihood.

Amol gets kidnapped from outside of his school. School Principal informs Anandi who gets shocked. Shiv plunges into action and orders the police to search his son as soon as possible. Police search attempts fails.

Later, news about Amol’s kidnapping leaked to the media. Shiv gives the interview and assures Amol that he will free him soon. Amol gets relieved with his father’s assuring words. All the beggars come to know that Amol is Collector’s son. They plan to leave the city fast and start running. Amol is taken out by Tinku.

Amol asks Tinku to go and inform his parents. However beggars catches Amol again. Tinku manages to escape. Tinku calls Anandi and informs him about Amol’s whereabouts. Anandi, Alok, and Shiv reach the place and stops the beggar’s clan from going to Jaipur with Amol. Amol unites with his parents happily. He gets welcome by the family members. All is well that’s ends well. Amol is back in the family and that brought smile on Anandi’s face. Keep reading Balika Vadhu.