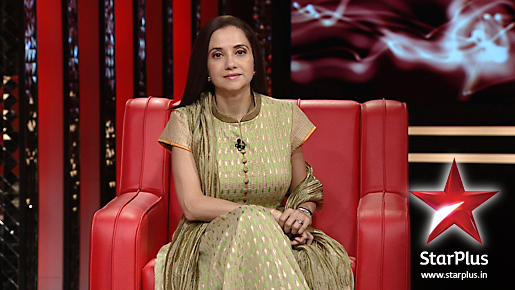 She first gives her review on 2 States movie: She speaks that 2 states is a love story of a punjabi boy and a tamil girl played by Arjun Kapoor and Alia Bhatt who are in love and gets married only after getting both of their parents wishes. It is based on the Chetan Bhagat’s novel – 2 States. The movie has credible actors and also the music from Shankar-Ehsaan-Loy is also good. But the drawback is that movie is slow. The story has good moments before the interval and both actors have done good job. She says that Alia has done lot of good acting better than Arjun Kapoor. She praises the acting of Revathy and Amrita Singh in the movie. The movie is stretched long for 2 1/2 hrs and also the second half of the film is complicated and at the end of the movie people seems lost and disenchanted. She gives 2 1/2 stars for 2 States.

She gives her verdict on the second movie- Dekh Tamasha Dekh

It is set in a small village and is a political sattire which brings social issues to the core and brings out comedy in that situation which is quite unconventional. When the hoarding of a politician falls on a drunkard and kills him, it leads to a communal tension in the village as that deceased person has recently changed his religion from Hindu to Muslim. This led to a fight in the city where both religious sides putting forward their claims for performing his funeral and final rites- either by fire or burial. This movie shows about our country’s darker side and also based on a true incident. The movie has credible actors with Satish Kaushik playing the role of a politician and Tanvi Azmi playing the role of drunkard person’s wife. She says that this Feroz Khan’s directorial has lot of hidden things that will only reveals at the end and is quite intriguing.. She gives 3 1/2 stars to the movie citing its USP – mix of political and social satire with comedy.

Audience speaks on this two movies:
2 States
– Natural movie but a bit long..
– A girl came to see this movie because of Arjun
– speaks about her connection with the movie as she is from North India and married a south Indian which is very much like the movie.

Dekh Tamasha Dekh:
Audience:
– likes the Social message of the movie
– comedy in a communal set-up is also welcomed

She then speaks on the role of character and supporting actors in films and their importance. She cites character roles like Judge Tripathi in Jolly LLB (played by Saurabh Shukla), Raje Bauji in Aankhon Dekhi (played by Sanjay Mishra) and Jimmy Uncle in Udaan (played by Ram Kapoor) and then welcomes actors – Boman Irani, Saurabh shukla, Ram kapoor and Sanjay Mishra on the show. 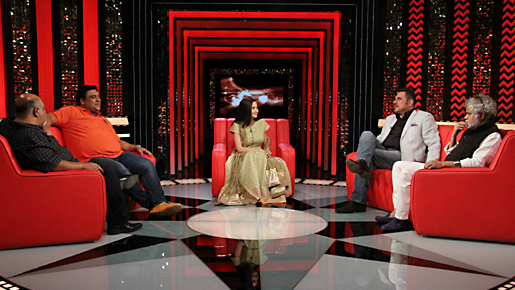 Anupama starts an interview by asking questions to them.

Anupama: How does a character actor or supporting actor make their own mark ?

Ram Kapoor: says that – All the roles in this business are difficult. Character actor doesn’t think about the differences between the lead and supporting actor.

Saurabh: says that most people acting in films have the same journey. The character is very interesting and lends support to the main protagonist.

Sanjay Mishra: says about the usual love story in films and he cannot fit as the lead in those lvoe story thus he takes supporting actor roles.

Anupama: Speaks on the blur lines between character actor and lead ?

Saurabh: speaks on the concept of ensemble cast. He says that in an ensemble movie all the actors have well-defined roles and there is no one main protagonist.

Ram: cites Jolly LLB for which Saurabh pulls his leg telling that he has not seen the movie and just listened from somebody. Everbody has a laugh at this moment as Ram admits to have not watched Jolly LLB.

Anupama: shares an experience with actor – Nawazuddin when she interviewed him about his talent and the recognition that he didn’t got much, and asks him whether he gets angry about it. Nawazuddin told her that he used to get angry before but now have calmed down and is happy..

Saurabh: People always have anger in every field and thus Bollywood is no difference.
Boman: It is pleasure to do acting.. Nothing matters to him..

Anupama: speaks on insecurities between heroines and heros about their roles, length of the role in movies. She asks them whether supporting actors also have insecurities among them or with lead actors ?
Ram: says that supporting actors have advantages over the leads. Some of those advantages are:
– They can do more films in 1 year like 10 while a main actor do can one or two movies.
– Main actors carries the film on his shoulder and are responsible for its outcome.
– If a film flops, then all the blame goes to the lead, and their career will be down if their 2 or 3 films are unsuccessful. But this doesn’t happen to supporting actor.

Boman: says that star value funds the movie and it helps the supporting actor to participate in the movie because of that funding.

Anupama: Do they want to give any suggestion to hero/heroine in regard to acting?
Ram: says he doesn’t think that they are more talented the leads and doesn’t want to give a advice to them.
Saurabh: He wants to rephrase the question and instead use ‘fellow actor’ instead of hero/heroines semantics.

Ram: says that the basic thing in acting that he noticed is that young new people don’t learn their lines. They forget the lines while enacting a scene or shot sequence. His advice to young actors -Learn your lines.

Boman: says that he will give advice to all buddy and upcoming actors. Learn your lines. and also be careful on your mark while acting/speaking and facing camera. He says that ‘learn your lines’ means understand what you want to speak for those lines.

Sanjay: Be lively. Do acting with your heart and then only you will be true..

Anupama thanks them for coming on the show and they leave on a happy note.

She then welcomes her second guest – veteran director/producer Subhash Ghai who has around 40 years of career in films and has given many hit films. He has casted many newcomers in his movies who are now well acclaimed actors in Bollywood. He is ready now with his new movie – Kaanchi. She welcomes him on the show.

Anupama: Why has he waited for 6 years ? (referring to his last release Yuvraaj around 6 years ago)

Subhash ji: He always works with Passion. When his last film – Yuvraaj flopped then he was sad and unhappy about it. Sooner, he was having problems with his acting school – Whistling woods and thats the reason for the delay. He wants to make a movie that has box-office success as talent now is measured on box-office success.

Anupama: Asks him, How does he get high-quality talent ?

Subhash Ji: As he is a director/writer, he understands many qualities needed for acting like traits, body language and all these he will develop when he is writing script, sketching characterization, imagining characters of the movie. In this way, he knows which talent he need according to his requirement.

Anupama: Which new girl fits those traits, How do you know her ?
Subhash Ji: says that he did 300 auditions for choosing the female lead and then selected Mishti for the role of Kaanchi. He says that to get good talent, auditions is the need.

Anupama: changes in films/industry that he like much and have positive feeling ?

Subhash Ji: Today, people have accepted high concept and low-budget movies which is a positive development. He says that parallel movies from past like Karz and Parinde will do well in current times assuming they are released at this time. Currently, 30 % of the overall audience are accepting offbeat movies like Queen, Iqbal, Lunchbox and Vicky Donor.

Anupama: changes that he didn’t like or didn’t go well with him ?

Subhash Ji: Commerce has taken over credibility. There is not much hunger for creativity. He shares a point on today’s heroines. He says that when they hear your script, they asks questions like Does it have hit songs?, How many item songs are there in the movie ?. The reason they asks these question likes in the economics/business. Item songs will give them a higher business avenue as they can participate in award shows and concerts because of their success with hit and item songs. He cites how things were different in past and cites megastar Dilip kumar used to tell him that he needs two good scenes for him in his movies. He says that current commerce setup will shorten the careers of actors.

Anupama: What according to him is the biggest truth ?
Subhash Ji: Continue your lies. He says this because marketing has taken over thus overriding creativity and this hurts him a lot.

Anupama gives her wishes to Subhash Ji and signs off by saying – Watch cinemas and think on cinemas..