Sonali Bendre starts the show. She tells that celebrities – filmstars and cricket stars will come on the show to live the life of a common person by working like them and make an earning. The amount they earned on the show will be multiplied by 100 and the resulting amount will be given to a needful person on the show.

The story is about 10-year old Sunita Ingale whose dream will be fulfilled by Ranbir Kapoor.

Sonali then welcomes Sunita and her father Mainik Ingale. She asks who else came with him. He speaks about his wife and his children who comes on the show.. She tells that the show promises to fulfill the dreams of a common person by living their dream for a day. She then welcomes Ranbir Kapoor by saying – bollywood heartthrob, Kapoor’s family ka cherag (lamp), and megastar. Ranbir comes on the show and she speaks why he agreed quickly to participate on the show. He tells that the show’s format is very good as it helps to do something good. He thanks the show and Colors.

Sonali shows an AV where Sunita is one of the twin-sisters and she is suffering from blood Cancer and fighting with the disease since last 8 months. Her father says that the total expenditure of treatment is around 4 lakhs INR. He explains how much difficult for him to arrange the money for her expenses. The doctors have said that it will take 2 years for her to cover. He compares her daughters to sons. He is thankful to God for giving him children.

There is a silence with Sunita, family and everyone have tears in their eyes. Ranbir promises that via this show she will get good treatment and wants her to be strong though he knows that is difficult to act and easy to just say. Everybody encourages Sunita with an applause.

Sonali asks Manik Ji and he refers to the doctor treating Sunita. Dr Nida Khan who is treating her speaks. She is from Cancer trust and research foundation and they support medical and financial help.. One chemocycle, injection can cost 20,000 to 70,000 INR and her treatment runs for 2 years. And until now, only 8 months have passed.. The estimated cost is 4 lakhs from the hospital. Sunita now doesn’t go to the school. Sonali asks about her best friend in school.. She speaks about Rani as the best friend. Sonali asks who teaches her at home and then asks what she wants to become in future.. Sunita replies that she wants to become a doctor. Sonali wishes her the best and wants to recover fast..

Sonali speaks with Ranbir and says that he can earn like a common person and then the show will multiply that amount by 100 times. Ranbir decides to become a Vada Pav seller for the day and then leaves.

Ranbir goes to start his mission and reaches D.Y. Patil College, Pune at 10:00 am to live the life of a common man and act as Vada pav seller. His target is to make 4 lakhs INR in one day..He then begins to sell Vada Pav to the college students there while also signing autographs with a 50 INR. The atmosphere in the college is full of life and was going over the top and sooner crowd control was difficult.. Ranbir’s intentions were good but things were difficult to manage and as people might get hurt so he left the college campus. 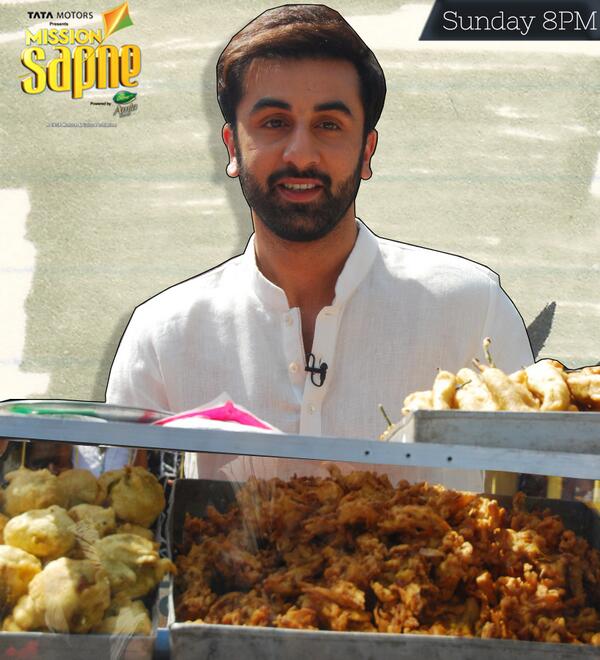 At 1:00 PM, he continue his mission and came to a new place and started to sell Vada Pav on the road. Sooner, he starts selling them and informs the people about the good cause. People are buying Vada Pav for 100 or 200 INR though it costs normally 5 to 10 INR. Ranbir also dances with them on songs from Aala..Barfi (Barfi) and Badtameez Dil (Yeh Jawaani Hai Deewani)..

At 3:00 PM, he explains to people that he is working as a Vada Pav seller for a good cause to help Sunita who is suffering from blood cancer..People contributes in their small way helping Ranbir. He also goes on to speak a dialogue from Yeh Jawaani Hain Deewani upon their requests and also dances and sings Bachna Ae Haseeno song and even shares the vada pav with a girl and even lifts and showers a kiss to her. Also, there is a Vada Pav competition to choose the person eating the max number of Vada Pav’s and dances on the Yeh rang song Barfi. Meanwhile, the winner is chosen from the competition.

Sonali then speaks about Ranbir who has completed his mission and she welcomes him back on the show. Ranbir says initially his mission was not successful at college, and later they decide to a new location and there he was successful and also did lot of hardwork but Sunita’s smile is more than many days of work..

Sonali asks him that he never did this work before ?

Ranbir replies that in his family also there is somebody who is also having cancer since last 1 year and thus he connected directly and emotionally with the show as well. He speaks that there is one similarity between Sunita and his family member which is strength. Chemotherapy process is hard and for Sunita is much harder as she is very young. He says that Cancer will never win as Sunita will hold on to her strength always.

Sonali speaks about any incident that was memorable ?

Ranbir: He says that when he spoke about the noble cause of the show to the people standing there, people quickly helped and gave money to him and lots of goodness was there..

Ranbir says that even making and selling Vada Pav is also an art. He says he covered up some Vada Pav’s which were broken. He says that he will do the job of Vada Pav seller any day.

Sonali asks, Who is better? Ranbir or Ranbir as Vada Pav seller?
Sunita: Both are good
Ranbir: says that he was hesitant but all went well.

Sonali calls Mainik Ji’s family on stage and Ranbir speaks with Anita (Sunita’s twin sister) and dances with Sunita and her on the song – Badtameez Dil. He kisses both sisters and Anita says that she is happy..

Sonali states total Ranbir’s earning is 9,670 INR. She deducts 2,000 INR as raw material and misc charges and informs the net amount as 7,670 INR. She multiplies this amount by 100 times to get 7,67,000 INR (0.767 million INR) as the final amount. Sonali speaks whether this amount of money is sufficient. Mainik Ingale ji responds that whatever the amount if remain then he will help some other girl.

Next Week: Mika Singh will spend 1 day as a Tea Seller.

Stay tuned to Mission Sapne every Sunday at 8 PM IST on Colors TV and you can catch it on Rishtey on Sunday at 10 PM.