Kapil starts the show and speaks with Siddhu first in a sign language about today’s guest. He then welcomes Sushmita on stage and welcomes her. When he asked how is she ? She replies that she is fine and calls him Darling (Jaaneman). On hearing this, Kapil becomes amused and gives an analogy to express his happiness – For those who don’t have ration card now they directly got the passport. He praises Sushmita and she replies in english expressing her admiration for him. Kapil says that they were waiting for Sushmita on CNWK. Sushmita requests Kapil to sing and then he sings the song – Maine Tumhe dekha tumhe maine jaana from the movie Main Hoon Na.

After the song, Mrs. Sharma comes in and Sushmita praises her beauty. Bittu compares her to an ice ball. Bittu cracks a joke on her that she had been put in air-coolers. She accuses him on the song that he sang for him – Lakdi ki Kaanti Kaanti pe Ghoda and says how can she do a belly dance on this song. She then leaves.

Sooner, Palak comes in dancing on the song – Gori Gori teri (Main Hoon Na). She shows her excitement and also Dhamaka comes on the stage with her. She accuses Bittu of stealing Palak Paneer food. She taunts Bittu and then wants to speak a quote and then mixes the song – Yaha Pe Baware Kaha pe aayega mera parwana and dances on the song with Dhamaka. In return,she wants Sushmita to give her fitness tips. Bittu taunts on diet. Sushmita is then doing acrobatics with an unique fitness concept –Aerial silk (which will have dancing, ballet, kalaripayattu) on stage while Bittu and all are watching with appreciation. 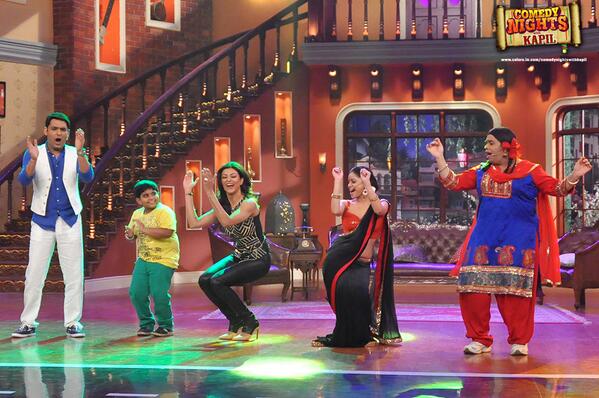 In an earlier short promo, Kapil speaks a dialogue in Bengali -Āmi tōmākē bhālabāsi (I love you in english) thereby getting a sweet hug from Sushmita. After getting the hug, Kapil became very happy and at the same time puzzled. Kapil’s refers to her as his first love. Let’s see how their chemistry translates into comedy this weekend.

Kapil thanks Sushmita and she in return urges people to watch CNWK with Kapil. Tonight’s comedy nights seems hilarious, witty and lots of fun. Stay tuned to Comedy Nights with Kapil at 10 PM IST on Colors (Sat-Sun). 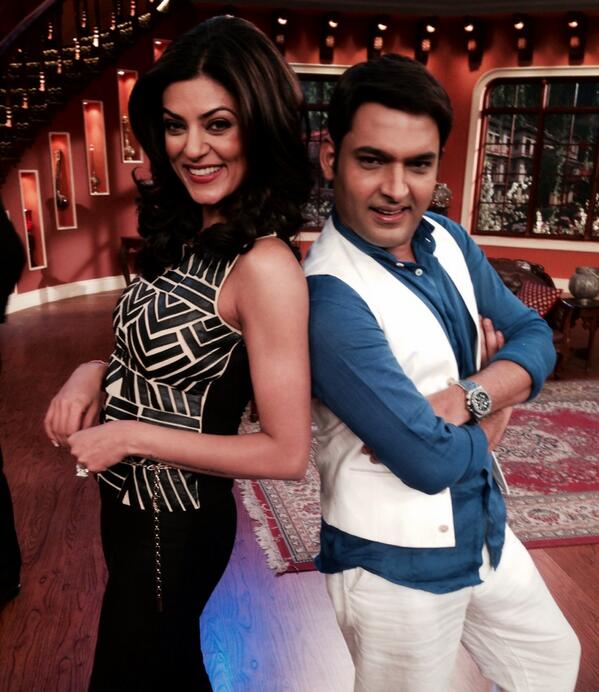 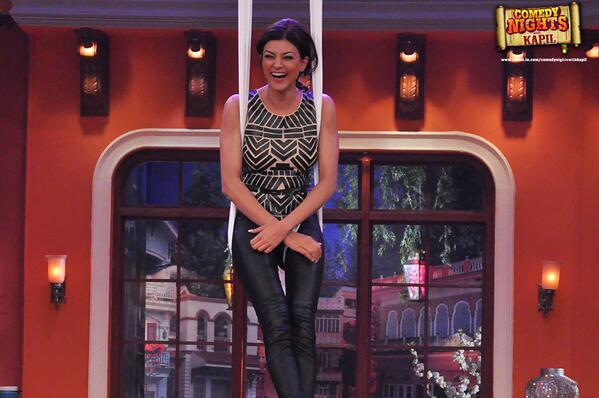 Some Info: Sushmita Sen’s I AM Foundation, her Twitter page and she acted as a Chemistry teacher in the movie – Main Hoon Na