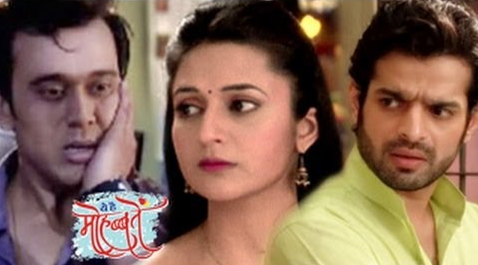 Raman surprised or we should say shocked Parmeet bringing Sarika with him. Parmeet got tensed seeing Sarika and understood his truth is out. Before he could tell anything, Raman breaks the truth to everyone that Parmeet is a creep and womanizer. He is sort of a rapist who takes advantage of innocent women and sexually harasses them. Raman was indeed shocked to know that they got Simmi married to such a man, but maybe its late now, but he decides to change things and bring them in order. Raman beats Parmeet starting with slaps and some manly hits.

He asks Ishita to slap him too, but she is stopped by Simmi, who still respects Parmeet as he is her daughter’s father. Ishita can’t leave this chance and slaps him hard to teach him a lesson that sexual harassment is the worst thing a man can do. Raman calls the police and gets Parmeet arrested. The Bhallas are shocked and Iyers too joins them to see the downfall of Parmeet. We wished to see Parmeet being hit by Raman on his………Anyways, at the end, everything is fine. We hope this brings Raman and Ishita closer and we get to see some romantic scenes between them. Fingers crossed!!