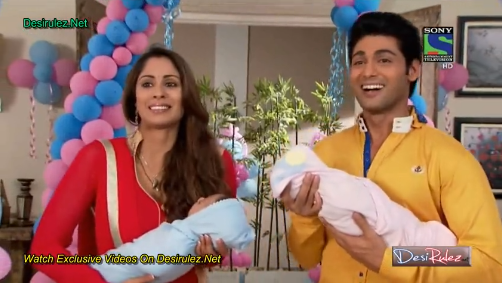 Sony’s much publised show Jee Le Zara, have an unique and beautiful love story between a elderly matured, business women Saanchi and a younger unmatured lawyer Dhruv. They fall in love as you know opposite attracts and get married after facing lots of hurdles from their respective families. Saanchi comes to her inlaws’ home and gets welcomed by her mother in law Neena. Dhruv’s father was against their marriage and gives 6 months to their wedding. Saanchi leaves her dreams to get involved in her new home. She faces two vamps, Suparna and Ankita. While Suparna is Dhruv’s sister in law, where as Ankita is Suparna’s sister and Dhruv’s childhood friend.

Saanchi and Dhruv’s relationship wins when Ankita tries to get close to Dhruv. Saanchi realizes that Ankita is trying to woo her husband and warns her. Ankita gets exposed and feels guilty for her acts. Suparna tries to throw Saanchi away from Dhruv’s life and wishes to settle her sister. She changes Saanchi’s pregnancy reports with the fake ones. Saanchi gets shocked when she gets the fake reports citing she can’t become a mother. Neena treats her badly under the influence of Suparna. However Saanchi wins her love. Suparna then tries to kill Saanchi’s baby. Saanchi slips from the stairs and gets unconscious. Doctor comes and tells her family about her pregnancy. Dhruv and the rest of family get happy. Doctor confirms that she is actually pregnant and her baby is healthy. Suparna gets exposed. Saanchi gives her time to rectify her mistakes.

Later Saanchi gets welcomed truly by her inlaws, who apologizes to her for their rude behavior. Dhruv pampers his pregnant wife and fulfills her food cravings in the night. Jee Le Zara was a good show with good looking actor Ruslaan Mumtaz and beautiful Sangeeta Ghosh. The show ended with Saanchi delivering twins. All the family members get happy with the new arrivals and poses for the family picture. It is yet to be seen if it will make a comeback with a grown up kids of Saanchi and Dhruv. We will surely miss Jee Le Zara.