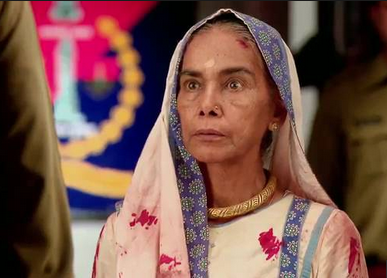 Balika Vadhu is witnessing high voltage drama as Dadisaa has been accused of murder. She surrenders herself after killing Het Singh’s son Sooraj. She didn’t want to kill him, but circumstances forces her to shoot him. The story goes like this. Gulli is a village girl and is helping Jagya in the election campaign. Gulli was the child bride of Sooraj. When they grow old, Gulli refuses to become victim of child marriage and therefore void her marriage with Sooraj. This doesn’t go well with Sooraj and he tries to misbehave with her. However it was a past story.

Now coming to the present. When Gulli was returning to the haveli, her jeep stops suddenly. Driver goes to bring the mechanic and asks her to sit in the near by temple until he comes back as it was a isolated place. Gulli was on the way to the temple and sees some goons chatting with Sooraj, planning against Jagya and Anandi. She records their conversation in her mobile. Some goon come and hold her from behind. Gulli gets shocked. Sooraj and the other goons laugh on her helplessness. Sooraj tries to molest Gulli, just then Dadisaa comes and picks the rifle kept there. She warns Sooraj and the goons to leave Gulli. She saves Gulli and locks the goons in the room.

Dadisaa starts running with Gulli towards her jeep. Sooraj comes on his bike and is about to throw iron rod on them.Dadisaa gets shocked and shoots him inorder to save Gulli. The bullet hits Sooraj on his chest and he dies on the spot. Bike on which Sooraj was riding slides and hits Gulli’s legs. Gulli gets unconscious and falls down. Driver tells Dadisaa that Sooraj is no more. She feels guilty. She takes Gulli to the hospital and surrenders herself to the police. Gulli gets treated by Jagya, but goes in coma. Het Singh tries to kill Dadisaa in the police custody when Jagya, Basant and Bhairov come and stop him.

Dadisaa asks Jagya to contest in the election and win. All the family members feel helpless as Dadisaa have been declined bail. Will Dadisaa comes out of this trauma? Keep reading……