Kapil starts the show with a comedy prank centered on an Airline. Kapil speaks with Siddhu on opening an airlines and shows his airline attire. Kapil informs Daadi and Raju who are seen to work as Air-Hostess and helper respectively to behave in such a way that their fake airline looks real. He says that Bua will be a passenger on the plane so as to create a environment that she has been travelling for the second time.

After a while, a client (girl, played by Roshni Chopra) comes and asks about their airline – Booden Airlines and she wants to travel to Bangalore. A male passenger (played by Rajiv Thakur) says that the airline is going to Delhi but the pilot Kapil says that they will drop the girl to Bangalore and it doesn’t matter the direction. Very soon, the girl passenger understands something is amiss and then tells that airline is still on the ground. The captain Kapil then says that he is very grounded (in nature) and Bua says that there is no problem. Kapil says that they are very down to earth even if there are 1000 airline. Sooner, Daadi as Airhostess tells that landing is complete and the passengers can leave. The girl passenger informs about meeting the same Auto driver while the male passenger informs that when he asked about Red Fort, he got a response that they can drop him to mental asylum.

Both passengers realized that they are still in Mumbai and argues with the captain Kapil. Kapil then informs her that once they perform cheating they run, and then runs away one by one.

Kapil then introduces two dynamic personalities who are coming on his show and welcomes – Vinod Khanna and Sunil Shetty who comes with short bouncers. Kapil cracks a line on the bouncers and in return respect from them. Siddhu cracks a line on both guests and tells them they are the ones who makes history. Kapil asks Vinod Sir about his entry into films with a negative role. Vinod sir says that it was his destiny to first work with a negative role and later become hero.

Kapil asks about the entry of Anna (Sunil shetty) directly from the gym and tells that others come film institutes, acting schools. Sunil shares his experience of his younger days when he used to stay in Nepean Sea Road while also seeing Vinod Khanna regularly who used to stay in Hanging gardens. The gym was also there in Hanging gardens and he used to frequently visit gym so as to make a body like Vinod sir. He got the passion to work out and make body from Vinod sir and Jackie Da.

Vinod Khanna is seen dancing with an audience member on the song – Chahiye Thoda Pyaar and seems to be in jovial and entertaining mood while Anna is enjoying observing them. Everyone applauds them on their dance. Lajja comes by wearing a dacoit dress and on a dummy horse and also making horse sounds as his horse is dumb. Kapil cracks a joke on Lajja and says that because of Lajja the horse became a fox. Lajja then dances on the song Mahbooba o Mahbooba to entertain the guests. The show seems to have some fun moments as well as anecdotal with personal experiences of Vinod Khanna and Sunil Shetty. 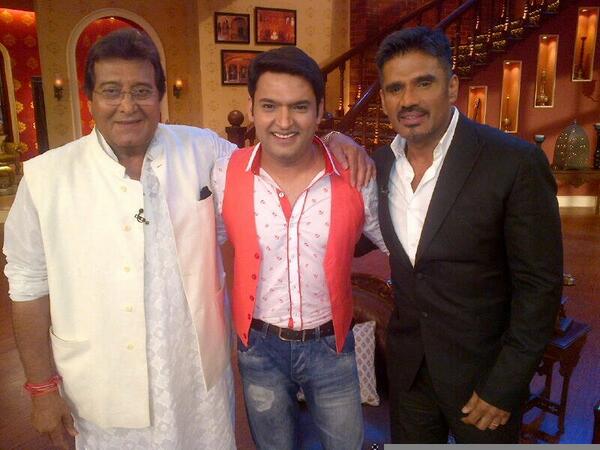 Note: Both Sunil Shetty and Vinod Khanna have recently collaborated and worked together in a movie – Koyelaanchal which was released last Friday 9th May.

Next Week (17th or 18th May) Guest: Veteran Actor and Popular face on Television: Alok Nath.

Alok Nath comes on the show and walks with very sincere devotion of God as he walks down the stairs to meet Kapil on stage. Kapil greets him by lying down on the floor and trying to touch his feet. A girl from audience asks him, Does he remember when he became Babuji for the first time ?

Alok Nath Ji: responds that his story took a 30-year old leap just after he was born making Daadi and Bittu amused as well as making them to burst into laughter.

Alok Nath Ji speaks with Daadi that because of becoming Babuji he has not seen Childhood, Teenage days, and even Ragini MMS invoking a laughter..Daadi requests Alok Nath Ji to sing a song for her.. Alok ji responds by chanting a devotion hymn (prayer song) – prabhu anand data bhagya ujjal kijeye chod de chal kapat maansik bal dejiye.. After this, Daadi showers a Kiss (Shagun ki Pappi) to Alok ji with which he begins to shake.