Sonali starts the show and shows the Precap of the show. Varun Dhawan (Bollywood Actor and heartthrob) will fulfill the dreams of Prabhakar Karale, a porter in Mumbai. Varun will also work as a Coolie (Porter) carrying heavy loads at Crawford Market in Mumbai.

Sonali welcomes Prabhakar ji on stage and speaks with him. Prabhakar ji, a 57-year old man who works as a porter in Mumbai. She asks him about his family. He informs that he has 4 children (2 sons studying 12th Class and 2 daughters), mother (80-years old), both daughters are married, and his wife has got blood cancer. One of his daughter’s husband has died so he takes her responsibility and also of his grand daughter.

She speaks on his porter work which is called Patiwala in hindi.. He says that he has some 100 acres of land for farming in his village but its barren because of scarcity of water and due to bad weather he didn’t succeed in farming and thus he moved to city for work and has been working in Mumbai since 17 years. He earns around 5,000 to 6,000 INR and lives in Ghatkopar and shares the apartment with 5 to 6 people. He supported his family by taking loans from others and now he owes 3 Lakhs rupees. He has many dreams which is educating his children and also need money to payback his loans.

Sonali speaks about angels and says that there is one person who will come in his life as an angel. She then welcomes Varun Dhawan who regards himself as a common man. He comes on a Main Tera Hero song.. He says that he didn’t dance because everybody were emotional. He talks about the initiative – Mission Sapne and asks why charity ? He talks about helping others and not refers to call Charity..

Sonali shows an AV of Prabhakar Karale’s life.. He works as Porter shifting and carrying loads (10 to 15 Kgs) at Crawford Market in Mumbai. He is 57-years old and faces competition from young people as well. His village is Dhangarwadi, Pune and his mother who is 80-years old is able to support him and his sons. Since 1 year, he started to work in his village and started farming while also moving to Mumbai for his porter work. He is not sure whether the crop will grow and fruitful. He says farmers takes their own life if their crop doesn’t bear fruit..

Varun says that his father David Dhawan wants people to smile. Sonali speaks with Prabhakar ji and asks him about the amount of load that he carries every day. Prabhakar ji says that he finds 5 customers in a day and lifts around 50 kgs a day.. And for him to find 5 customers takes a lot of efforts as well. He then talks about his son’s medical condition who has a blood abnormality – Haemophilia where the blood normally doesn’t stop once there is an incision or cut is made on the body thus his son cannot do heavy duties.

Sonali speaks with his daughter Rani and asks her how does she felt on hearing Varun ? She says that she is very proud of her father. Varun says that the best thing about Prabhakar ji is that he takes care of his 80-year old mother. Varun says that he has seen crawford market when he was 5-years old and went there to buy carrots. Sonali then wants Prabhakar ji to show the technique of lifting heavy loads to Varun..Varun says that his strategy will be to charge higher price for his work as a porter in crawford market..Varun prepares to start his work and the show will multiply that earned amount by 100 times. He leaves with a smile and promises to fulfill Prabhakar ji’s dreams.. 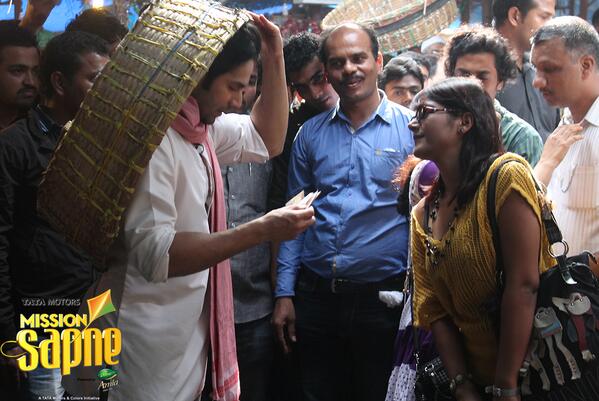 At 11:00 am Crawford Market; Varun reaches the market and meets Prabhakar ji and speaks with other fellow young porters. He takes advice of Prabhakar ji on ground there and wears a Nehru cap and also takes the blessing of Prabhakar ji. A women hires him as a porter and he carries loads for her supermarket products. At the supermarket, Varun also acknowledges for photographs and charges 20 Rs for a photograph. His basket starts to become full with many products that the first customer women bought. Varun feels the heat by lifting the heavy load.. The women gives him 500 INR for his work..

At 12:30 PM: Varun charges each one 20 Rs for photograph and then finds a girl Charu and works as a porter for her.. The girl speaks about his breakup. He says that he doesn’t have a girlfriend. Charu asks him what does he feel about her ? He says that she is beautiful.. He greets Charu who gives him 2000 rupees and leaves. He then gets another 500 rupees for his photo. He acknowledges their request and dances with girls on a Disco Deewane song..

At 3:30 PM: He entertains his fans and earns money. He got a tough task of lifting much heavier load of Papayas and fans call him Coolie No 1. He couldn’t lift that heavy burden citing that his neck could get a fracture.. He says that he is 26-years old and challenges that no young people can lift it.. He then removes the half weight from that heavy basket and finally delivers that Papaya load.

At 5:00 PM: Varun carries a heavy bag of Onions on his back with his sheer passion and gets 300 rupees from a customer Shahzad. He then leaves from there..

Varun and Prabhakar ji comes on the stage and Sonali asks Varun, how does he feel to work as a porter for one day ? Sonali shows an AV about an incident where Prabahar ji was dragged and pushed by a man with force there on crawford market. Varun says that he didn’t realize what’s happening at that moment and thought the man to be Prabhakar ji’s friend. Prabhakar ji says that such incidents are parts and parcel of a Porter’s work and life. Varun says that mumbai people are friendly but they are always in rush.. He also talks about lifting Papaya hard as it was weighing 25 kgs and asks why people eat so much Papaya. Prabhakar ji talks on his believe that the God will help him regarding his financial woes and regards Varun to be God-send for him.

Sonali talks about the money that Varun earned after misc deductions is 4,240 rupees and the total net amount after multiplying 100 times is 4 Lakhs and 24,000 rupees which is for Prabhakar ji. Prabhakar ji wants to pay back his loan from this amount and also support his son’s education.. Varun gifts two phones to Prabhakar’s family as his family also stays in Village.. Sonali signs off by saying – Mission will continue.. 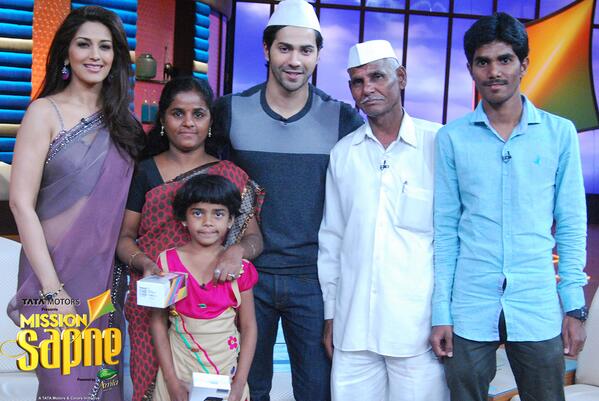 Next week: Popular actor and star – Ram Kapoor will come on the show and will work as a Taxi driver and drive Taxi on mumbai roads for 1 day to fulfill the dream of the common people – Kiran and Aarzoo.

Info on Coolie (porter):
A porter, also called a bearer, is a person who shifts objects for others and carries heavy loads..Read more on it at its Wikipedia page.