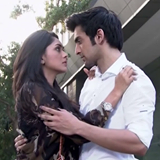 Bulbul was drifting towards Purab with love but she again got a misunderstanding about Purab’s character after wrongly assuming that he was romantically involved with a girl inside his car after seeing them together. Later, that girl who is Abhi’s fan informs Bulbul that Purab is only Abhi’s best friend and manager and all the girls he meets are only Abhi’s fan and he is just the one who mediate and organize their meetings. After hearing this, Bulbul realizes her mistake of thinking wrong about Purab. She plans to apologize him by giving him a Greeting card with Sorry written on it. She then goes to present the greeting card to Purab in her office. After seeing Bulbul, Purab becomes annoyed and thinks that she came with her resignation letter and accepts it and tells her to leave from his office. At that time, Purab is un-aware of the content of the letter which is actually a Card expressing Sorry.

Bulbul leaves from there with some anguish after Purab’s hard talk. Purab opens the letter and finds that Bulbul is apologizing in that card. He then goes to Bulbul and speaks that she has to leave because he cannot concentrate on his work and regards her an intelligent and efficient employee. He openly says that he thinks about her all the time – office, home and everywhere and he is unable to control his feelings for her. Because of which, he wants to send her far. Sooner, he openly confesses his love and says – I love you to Bulbul. Bulbul leaves from there as she becomes shy and it was quite unexpected that Purab will openly confess his love for her though both knew they were coming close. Bulbul ponders to talk with Purab about his confession while Purab also thinks the same. After a while, they meet again in the lift and they share an eye-lock for some time and thereafter both hugs each other to bring a feeling of ‘lovestruck’. [Bin Tere Madham Madham Bhi Chalre Thi Dhadkan Jabse mile tum hame..Aanchal se tera bandhe..Suno Aasmano. song playing in background.]

Thus, now Bulbul is clear that Purab haven’t dated or spend time with many girls and also knows that he loves her. The tales of both sisters are different, while for Bulbul it was mutual love with Purab and direct, it would not be the same with Pragya and Abhi. As of now, Pragya loves Suresh and also wishfully wants to marry him after accepting his proposal for marriage but with an unknown condition which she haven’t revealed to him. Serendipity (luck with pleasant things not sought after) will play an important role in Pragya’s destiny and it would make her drift towards Abhi. Coming to Bulbul and Purab, How would their budding love prosper and holds on to the test of time ? How would Abhi react once Purab informs him about Bulbul and the same goes with Pragya ? Will Abhi’s sister Alia put some hurdles in their love ?

While Abhi has thought to not confront or give a tough reply to Pragya after her media interview since his family is at wrong, but in the upcoming promo, Abhi’s sister Alia wants him to tackle and confront Pragya strongly as she has hurt his media reputation badly. Abhi contemplates on Alia’s advice as he trusts and believes her a lot. Stay tuned to KumKum Bhagya on Zee TV @ 9 PM IST (Mon-Fri).

Purab’s confession of love to Bulbul, and their lovestruck moment Scene
[youtube id=http://youtu.be/bNgeigOf078]