Karna learns that Radha is not his mother and also Adhirath not be his father. Radha couldn’t tell about his mother and his father Adhirath informs that they don’t know about his actual mother. Adhirath speaks they were childless and at the shore of Ganga, they found Karna in one basket. He calls the child Karna at that time as the blessing of Ganga and also has the blessing of God Suryanarayan. Adhirath informs Karna after he asks him in a heavy voice about his actual father that if Vasudev Krishna himself has told him about his parents then that should be true. Karna becomes shattered on hearing the truth. He asks her mother Radha now by which name he should be called as the world knows him as Radheya and how to answer people calling him Radheya?

Karna goes to shore and remembers about Krishna informing him that he is not the son of Adhirath and Radha, Suryanarayan’s (God Surya) blessing, as the father of Karna, Raj mata Kunti’s son . His mother Radha uttering that she is not his mother though she didn’t intended to speak those words. Karna remembers about taking blessings from Kunti and she informs him that she is like his mother and even wanted him to call her mother. He then remembers Arjun’s help and even his own words to Arjun that he will Kill him in the battlefield. After remembering them, Karna cries and is supported by his wife Vrishali. She informs him that even Vasudev has two mothers so he can also accept the fact of his two mothers – Radha and Kunti.

Karna is heart-broken as he has to fight his own family which will bring much pain to his heart and his current heart situation is very unstable as gets reminded about the future and the current circumstances. He then speaks about his struggle entire life to bring respect to his strength and power wherein he challenged the world and also took insults in his stride. He says that all those things were not needed. He made Arjun as the focal point of all his insults. He wanted to show the world that a common person can become the biggest fighter in the world. But now Arjun turns out to be his brother. Asks her what solution he can get for this situation ?

Karna also speaks about his love and commitment with Duryodhan and how he can change from love to hatred for Duryodhan and the vice-versa, how he can change his hatred to love for Arjun ? He begins to ponder and questions how he can use his weapons in the war against his own brothers ? Vrishali suggests that Kunti will answer all his questions and wanted him to ask her, Is Dharm the only respect ?

Krishna is about to leave from Hastinapur and Vidhur apologizes Krishna as insult was meted to him and even the peace proposal was a failure. Krishna says that they’ve tried for a peace agreement which was good. Krishna says now the dawn of war is close and soon Hastinapur will be informed about the location of the war by means of a War notice. Kunti says that Pandavas are well-off under Krishna’s shadow. Krishna suggests Kunti to speak with Karna her son about Dharma so as to change his decision to defend Duryodhan. Kunti remembers about how she send Karna away just after his birth in a basket at river Ganga. She also remembers Karna welcoming her by a lotus in Hastinapur’s assembly. Sooner, Kunti cries while song plays in background suggesting that only time has the most strength..

Coming to Kunti’s reason to send Karna away from her: Kunti was unmarried when Karna was born. Kunti got a blessing from the ancient sage Durvasa which states that she can ask any deity for a son. At that time, Kunti princess of Kunti kingdom wanted to test the blessing and then asked Suryanarayan (God Surya) for a son, and her wish was answered and she got a son Karna who was born wearing an armour – sun shield (Kavach) and an earring (kundala). Kunti after the birth of Karna hesitated to keep him with her as she was unmarried. She then placed the baby Karna in a basket and set him alfoat in the river Ganga and then Karna was found by Adhirath (Charioteer of king Dhritrashtra).

Karna at the shore calls for any sacred person, poor or beggar as he wants to give them some charity and things. Kunti comes there and informs that she is both poor and also a beggar. Kunti informs him that she is his mother. Karna speaks that during the war, he will not fight with her other 4 sons and will only fight Arjun, so at the end she will only lose one of her sons for which she will cry. That means, Karna will be on the side of Duryodhan during the Kurukshetra War and will honor his commitment and friendship with Duryodhan [Duryodhan has made him the king though he was not a Kshatriya, thus over-rided caste boundaries, and even has helped him to fight Arjun in an archery fight which was only possible after he became a king], and at the same time he is completely shattered after knowing that Arjun and other Pandavas are his brothers and he is the biological son of Kunti. 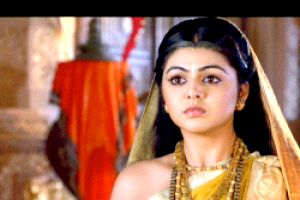 Karna informing his mother Kunti that he will be on the side of Duryodhan and will fight his own brothers.
Episode 197: May 27th, 2014
[youtube id-=http://youtu.be/1Ugk3qOpUdQ]