Guests on the Show: Megastar Akshay Kumar who is also film producer, presenter and host, and a martial artist; and Vipul Shah: Film director and Producer

Kapil starts the show and introduces himself as Dr. Bittu Sharma. He says that the hospital is the best place in the world as people don’t think before giving money and that’s the reason he became a doctor. Dr. Bittu aka Bittu then wonders where his two patients have gone and then finds one patient coming back. Bittu asks where he has been? The patient says that he was visiting the restroom and Bittu cracks a joke that he was being given glucose and he is removing it from his body.

Bittu is seen with Raju on-stage with 2 beds and 2 patients and Bittu wants each other to deal with their respective patients and perform operation. Raju wants some accessories for the operation and even says he will follow Bittu. Bittu cracks a joke that he has opened a hospital and not a facebook page which he can follow. Bittu is seen to use carpenters’ cutting plier while Raju uses a similar equipment of a screw driver and both cut a leg of the patients with their accessories. Bittu congratulates Raju on doing a good job. Sooner, a phone ring bells and one patient (Rajiv Thakur) attends the call and informs his wife to bring the police at the earliest at Ram Bharosa hospital since the doctors have forcibly operated him. Bittu learns that the patient has informed his wife to call police and suggests Raju to run away. Daadi also comes briefly there while drinking and they hear the police siren, Bittu in haste puts back the heart and leg of the patient and runs away. 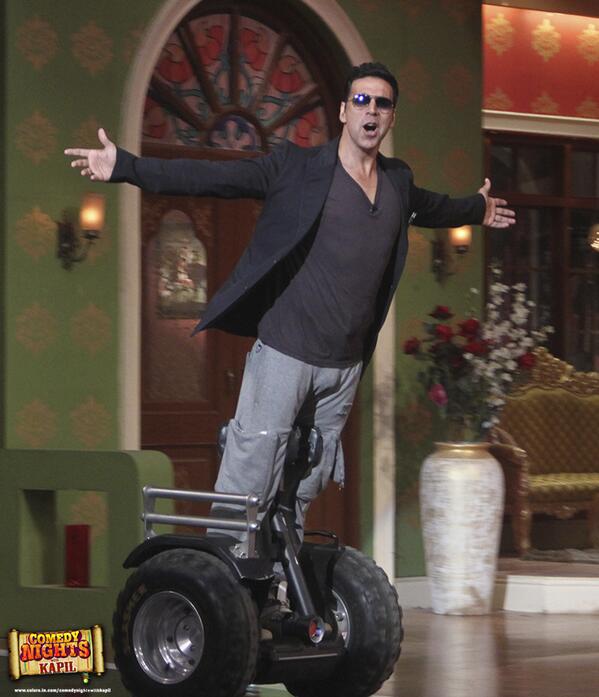 Kapil speaks with Siddhu that now its very hot and he was thinking of holidays. But recently he came to know that a Bollywood Star is coming to their home to celebrate ‘Holiday’ and he says that any visitor is welcome as the saying suggest – Atithi Devo Bhavo (The Guest is God) and Kapil welcomes the star of the evening – Akshay Kumar.. Akshay comes on the stage while standing on a 2 wheel stand-up bike with Aaj Dil Shayrana from his upcoming movie Holiday. Siddhu welcomes Akshay with a witty line – Mausam Suhana Dekh ke Koyal ke Kook nikal jati hain, Darbare Khuda Mein Fariyada Houk Nikal Jaati Hain Yuh hi Nahi Kahte Akki ko Sabse Bada Khiladi Singh is King ko Dekh Dar Accho Accho ki Phook Nikal Jaati Hain.. Kapil becomes ecsatic on hearing those lines and also Akshay becomes happy. Later, Palak is on stage in a white Karate Attire with green pants. Kapil asks audience, any women who wants to learn self-defense training. A girl from audience comes on stage and Akshay trains them about self-defense. Akshay then enacts a self-defense exercise with that girl and tells how she should throw the teaser away and making him fall down by merely using her hands but with a technique as taught by him. The girl enacts the scene with Akshay teasing her from behind and she was able to throw him and make him fall down on the ground with her hands after applying the technique. Akshay now teaches a flying kick shot to Palak. Palak holds a pillow with a cushion supporting at her back and Akshay runs fast and directs a flying kick at the pillow after which Palak falls down badly as she loses control and even the cushion doesn’t come to her rescue. Siddhu and the audience are in splits with full laugh and Akshay hugs Palak for being so sporting. 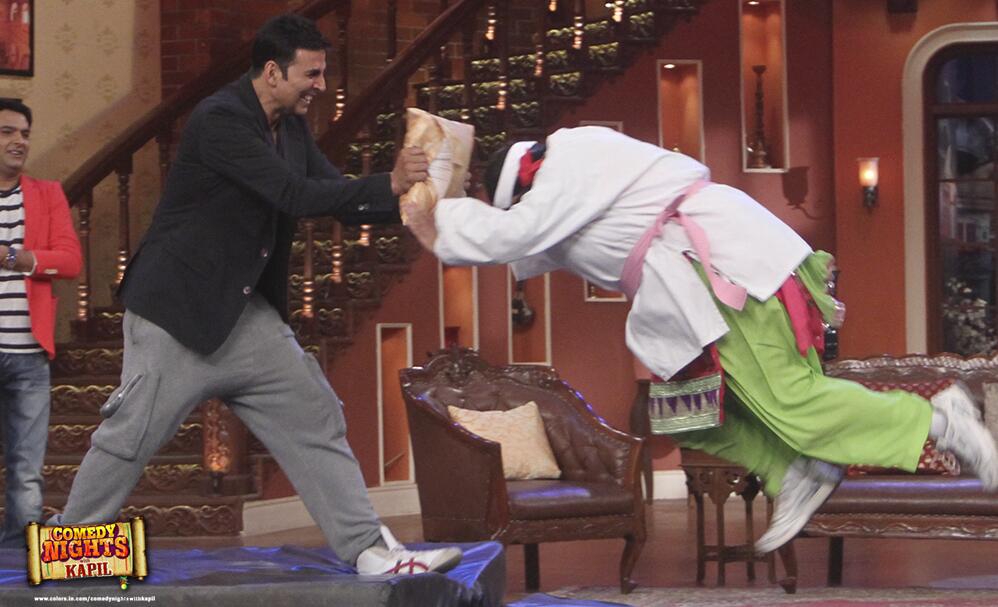 Daadi comes on the stage in a purple dress and starts a conversation with Akshay while they all sit on sofas (Kapil, Akshay, and Vipul Shah joins them). Daadi speaks that after Salim-Javed, she has not seen any good writers so she decided to start writing. She says that she wrote a wonderful script and calls it a peti pack script. Vipul ji speaks whether mangoes will come out of that script, Daadi says that as he is a filmmaker so he can take out anything he wants from her peti pack script. She then takes out the script from her hand bag and asks them to listen carefully and after some pensive thought, she speaks there are two young lads – Lai and Neeru, there is a man named Bakhor saab who does’t have both legs, and he is being called Sham guard. The audience applauds Daadi and Daadi says that the script is already sold out as people have already appreciated it. Bittu steps in and says in that sham guard, there will be a girl Vasanti who might have a relationship with Lai or Neeru. Daadi scolds Bittu for interfering. After that, Akshay snatches the script from Daadi and says that now he is the owner of the script and will make a movie. Akshay throws the script at Vipul ji and says that if Vipul can realize this movie then he is ready to act in the movie for free. Bittu asks Daadi that her work is not suitable for script writing and instead suggests her to work at a cycle repair and puncture shop. Daadi responds that she only leaks gas so how come she can work in the cycle shop invoking a laughter.

Daadi says that at her old age nothing happens much, she struggles a lot during the day and during the night she sits at the Andheri railway station and works as an astrologer and uses her parrot to carry out her job. She then takes out a parrot toy from her bag and calls it Rambo. She says that she will show the future of Akshay and Vipul ji by using her parrot. Vipul ji asks whether she has shown the future to Bittu.. Daadi takes out her chits and sits down with the parrot. She then throws the chits and first selects a chit for Akshay with some random help from Parrot. She reads out the chit that Akki’s future is such that he is missing his co-actor Sonakshi Sinha making him laugh, he also wants to dance with a girl much hotter than Sonakshi. Daadi then puts back the parrot for a while and wants to dance with Akshay as she thinks herself to be much hotter than Sonakshi. Daadi and Akshay dances on a song – Tu hi To Hain (from his movie Holiday) and Daadi funnily comes close to his body invoking a laugh. Dhamaka (Akshat) is seen to wear chinese traditional dress in order to play a character with that setting. kapil signs off the show by saying that all the people at home – continue watching his show and Keep Smiling. Stay tuned to Comedy Nights with Kapil @ 10 PM every Saturday and Sunday on Colors. 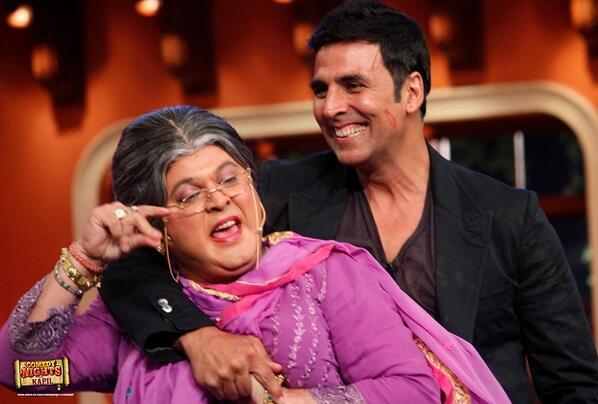 Additional Info:
* Akshay and Vipul ji came to CNWK for the promotion of their movie – Holiday: A Soldier is never off duty. Vipul ji is a co-producer of the movie. The movie is directed by A.R. Murugadoss (also directed Ghajini) and stars Sonakshi Sinha in the lead and Govinda is seen in a supporting role. Holiday is a remake of 2012 Tamil Action-thriller – Thuppakki. Read more on the movie at its Wikipedia page.

* This is the third time that Akshay came on Comedy Nights. He came for the first time with Sonakshi Sinha and Imran Khan for the promotion of Once Upon a Time in Mumbai Dobaara and then he came with Ronit Roy, Shiv pandit, and Aditi Rao Hydari for the promotion of the movie Boss.

* Akshay obtained a black belt in Taekwondo in India and studied martial arts in Bangkok, Thailand. Taekwondo is a korean martial art which combines combat and self-defense techniques. Read more on Taekwondo at its Wikipedia page. 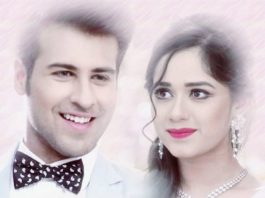 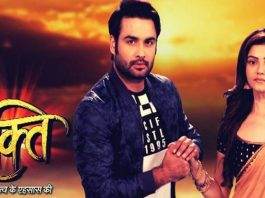 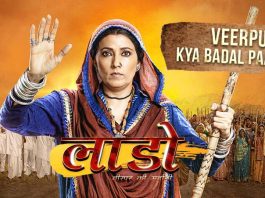