Bittu starts the show by attending a phone call which is from a kidnapper who informs him that if he didn’t pay 10 lakhs INR by evening then his wife will be kidnapped. Bittu says that the to-be kidnapper can look at his wife by lowering his eyes down since his wife is very short invoking a laughter. He then challenges the caller for a face-off if he has to drank his mother’s milk. Bittu goes on to say that he is Bittu sharma, a poor fellow.

Bittu speaks if his wife is Kidnapped then that’s the best thing for him so why he should be fearful ? Bittu speaks with Siddhu that he learnt to not have fear from his Guruji (teacher) Shree 420 – Gabbar Singh invoking a laughter. Soon, Bittu finds his house owner who comes there to meet him. Bittu starts to cry and speak that now he doesn’t have anything and says that there was a theft in his home and all the things were stolen. Bittu says that he cannot pay the rent as he doesn’t have his mother’s jewellery as well. The house owner (Paresh) suggests Bittu to stop his acting and melodrama and speaks that he didn’t came for rent but for some other thing. Bittu now comes back in his own self, and both sits together on sofa. When the house owner asks if there are any problems at home ? Bittu responds that please do not call it home as it is a paradise and is very lucky since many top stars like SRK, Salman have came here and their films went on to become top hits. The house owner then wants Bittu to leave their lucky home and gives him a court notice, and informs him to leave the house by evening after paying the rent.

Raju comes on stage with flour spread over his face, and Bittu thinks him as a Ghost. Bittu gets an idea to send his owner away in the night by convincing Raju to enact as a ghost. Bittu says that Raju has to listen in any circumstance and Raju leaves from there after hesitantly agreeing to it. Later, the house owner comes to Bittu’s home for taking rent and to make sure that Bittu vacates the home. Bittu informs him that in his honor a farewall party is organized, drinks will be served and also there is an arrangement of singers. When the owner sits with Bittu, Bittu plays its first trick of making the owner afraid. The lights on the stage becomes dark and red, and Daadi suddenly appears at the kitchen and is dressed in a ghost attire and make-up and holds a candle. She says that she will not allow anybody in that house and she is the house’s Bajirao Singari.. After that Daadi disappears and lowers behind the table, the owner becomes afraid and thinks there is a ghost in the house. Bittu tries to calm him down and says that there are no ghosts at this home. Sooner, Mrs. Sharma comes on stage as a witch and speaks that – he doesn’t need to go to the graveyard as she came for him at the home itself. The owner becomes more petrified and worried, and Bittu again tries to calm him down. The owner then asks Bittu for some spicy food, and Raju comes there dressed as a waiter in a black suit but without head. The owner again becomes worried as the waiter doesn’t have any face. Sooner, Daadi, Mrs. Sharma who are enacting as ghosts come on stage and after seeing them the owner runs away.

Kapil now speaks of the guests on the show and introduces Himesh Reshammiya by saying that he is a superhit music machine and he will be coming to celebrate his movie Xpose. Himesh comes on the stage and Kapil welcomes him. Laccha then comes on stage while driving a rickshaw. When Bittu asks Laccha whether he has left his dairyfarm business, Laccha taunts Bittu by saying that his clients doesn’t pay the bills for milk thus he has to sold off his buffaloes and therefore driving a rickshaw. Laccha informs Himesh to be careful from Bittu as he can take away the songs from his album and even says that Bittu could also take out Resham from his surname (Reshammiya) invoking a laughter. Laccha wants to ask a personal question – He asks how Himesh looks so thin and slim ? Himesh says that indeed he has to follow a diet and also stop eating Rotis. Kapil then opens the floor to the audience.

Audience: A young man speaks that he has heard that Himesh ji can compose many songs in a day and he wants Himesh to compose a song for him right away for the lines that he wrote.
Himesh agrees for the request. The young man speaks the lines that he wrote – Raat ke Andhere Main Mila Hain Ullu..Mujhe Kaha Gharmi Main Chale Kullu..Le Gaya Mera Se Ticket Ke Paise.. Aur Haat Main De Diya babaji ka Thullu.. Himesh tries to compose a tune for that lines and then sings on-demand a song created from those lines. Kapil signs off the show by saying that all the people at home – continue watching his show and Be Happy. 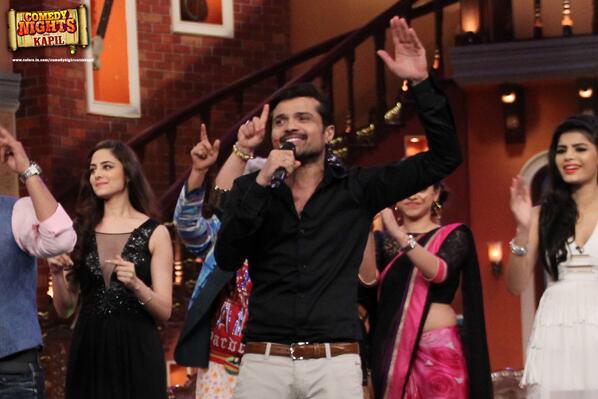 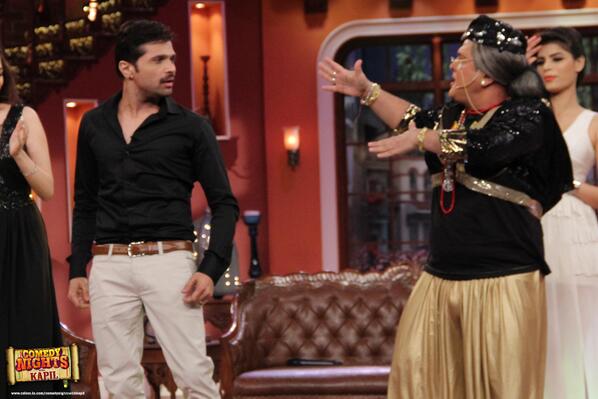 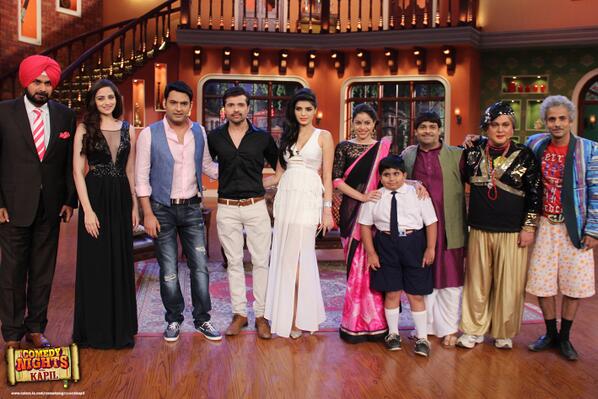