Sonali starts the show and says that a picture speaks what thousand words cannot express. She speaks that the one who takes photographs and asks for people’s smile sometimes forgets his own smile. The precap shows the common person Hemant Das and Karan Johar will come on the show to fulfill Hemant’s Das dream and work as a photographer for one day.

Sonali welcomes Hemant Das on stage and speaks about his photography and asks him since how many years he has been doing photography ? He replies 8 years. He speaks on how get interested in photography and says that he came from his village to work in Mumbai and after coming here all the money he earned went for his wife’s and daughter’s healthcare. He speaks about his daughter who is 18-yrs old and two sons – Rajesh (21 yrs old) and Dharmender (8 yrs old and studies in 2nd class), He says that he took loans because of illness and now he is unable to save money and even cannot buy a house or his daughter’s marriage. Sonali speaks that the celebrity will come on the show and whatever he earns it will be multiplied by 100 times and the aggregate amount will be given to Hemant ji. She now introduces the guest who is coming on the show to realize the dream of Hemant. She speaks that he is a filmmaker whose movies have shown both humanity and love as an integral part and with great pride, she invites director and producer Karan Johar. Karan comes on the stage on a Disco Deewane song (Student of the year – SOTY). Sonali thanks Karan for coming on the show and karan says that once he learnt about the show there is no schedule which will come on the way for this show. Sonali thanks him for those words and his help.

Sonali shows an AV of Hemant’s life. Some 15 years ago, he came from his village to work in Mumbai and works as a photographer at Gateway of India. But most of his money earned has gone for his family’s illness and now he owes loan from people as well. He says that when he came for the first time there were only 30 photographers there, but now they have 300 photographers thus his business is under loss. He says that at the end of the day, he saves around 60 INR though he earns 200 INR but he needs money for food and expenses. He speaks on his illness which is kidney’s stone and rupture. The doctor has advised him to take medicines whenever he gets pain. He speaks about his wife illness (during Childbirth – bachadani in hindi) hand it took 2.5 Lakhs INR and she got treated but still she cannot work at home properly. After some 2 to 3 years, both his sons got Kidney block but couldn’t help them. Now he owes 8 Lakhs INR and the loan gets increased as he thinks. Even he has to pay interests, he says that if he eat poison or hang himself, then society will taunt his family. He says that sometimes his mind says that has to commit suicide..

Karan says that whenever he sees this type of story, he feels what right he has done, and what wrong Hemant ji has done to be in that situation. Karan says that after seeing Hemant ji’s story, his wife’s health and also Hemant ji’s thought to commit suicide, its such a feeling that in India there are millions of people who deal with these emotions. He says that there are so many obstacles in Hemant ji’s life and he can only say he feels bad for him. Sonali speaks that whatever Karan earns it will be multiplied by 100 and the total amount will be given to Hemant ji. Karan says that he sells dreams and now he has to sell photographs and even sell his autograph, and he is ready to do that job at Gateway of India. Karan says that he knows how to beg as he is a filmmaker and sells films to people. He humbly speaks those words and says that he will get tips from Hemant, and says he is very excited and even will take money from people if he captures photographs very badly. Karan leaves with Hemant to work as a photographer for one day.

At 11:00 AM:
Karan reaches Gateway of India, Mumbai in a black Kurta dress to fulfill Hemant’s dream and realize it fully. Karan stands in-front of Taj Mahal hotel and says that his mission is to take photographs of tourists and people and though he is a director but doesn’t know much have knowledge with still-camera. Karan learns the photography tips from Hemant ji and first takes a photograph of Hemant ji. Hemant ji becomes Karan’s assistant. Karan finds one customer and says that he has to pay 40 to 50 INR. The customer also wants to take photo with Hemant, and Karan takes the photo and even hugs the customer and the first payment from the customer Abhishek is 100 INR. After that first payment, he finds a girl customer who wants him to sing a song. Karan says that he is bad in singing and only knows lyrics. He then speaks on the lyrics from his movies – Tujhe Dekha to Jaana Sanam Pyaar Hota Hai Deewana Sanam.. Abhi Yaha Se Kaha Gaye Hum.. Teri Baghon mein mar Gaye Hum.. and an extra one – Tum Paas Aaye.Yun Muskara Tum Ne jaana Kya Sapne Dikhaiya..Ab to Dil mera jaage na sota hain Kya karu Hain Kuch kuch hota hain.. The girl becomes shy and smiles when Karan asks her whether she really feels Kuch Kuch hota hain, Karan even meets her husband and friends and takes their photo and hugs her. 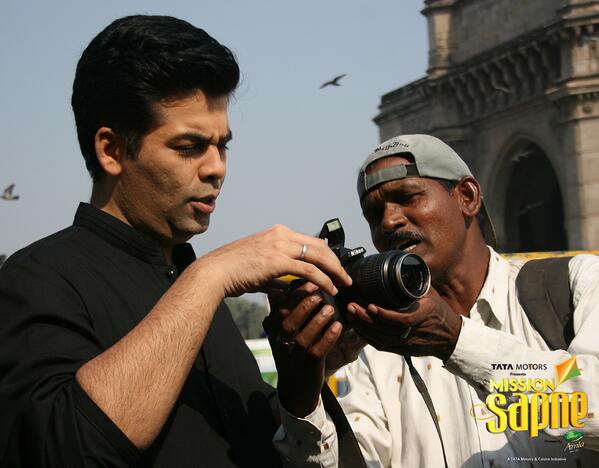 Karan says that he has earned 500 INR in just 10 mins which he never earned so much in so less time. Karan faces a problem and is confronted by policeman on Bandobust who asks whether he took permission. Karan instead takes their photo in front of gateway of India and then earns money from police. Karan says that though he was initially fearful but at the end he even got money. Karan meets some boys from Madhya Pradesh and they decide to give him 50 INR and aks him to act like SRK. They say that song – Tujhe Dekha to Yeh Jaana Sanam… Pyaar hota hain Deewana Sanam.. and even Karan sings the song with them and also enacts the SRK trademark pose for that song by stretching the hands. Karan now meets a man from Benaras and he wants to show the dance to Karan and then dances while also showing wheel. Karan gets 101 INR from Vikas and that 1 INR is a Shagun which woild be lucky, Karan meets a group of girls who come from D.Y. Patil College who came to Gateway of India for a touristic walk. They have bunked the college and Karan takes their group photo and gets 100 INR from those 8 girls and Karan thinks its not fair. Karan also signs autographs for them. 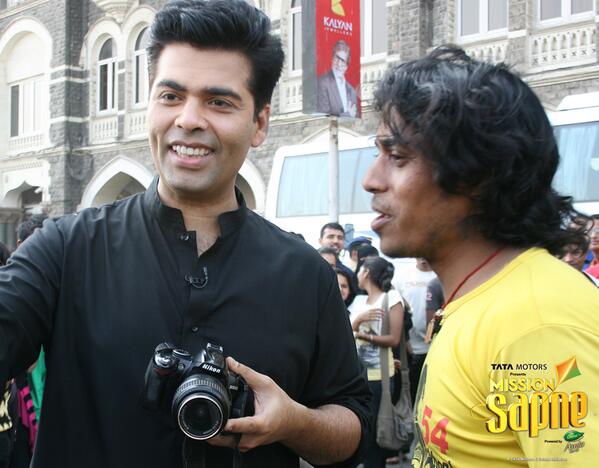 Karan meets foreign tourists who asks why people are surrounding him. Karan explains to them that he is a movie producer and reality show judge and came here to help a photographer for the day and its a charity thing. When he speaks about his name – Karan Johar, they then calls the movie name – Kuch Kuch Hota Hain. Karan speaks a dialogue from Kuch Kuch Hota Hain and both the foreign girls are too tight in paying money and agrees to pay 50 INR each. Karan gives a Saree for one of them to wear and then takes their photo with one women clad in the saree. Karan meets a family from Zambia and gets 500 INR from them. 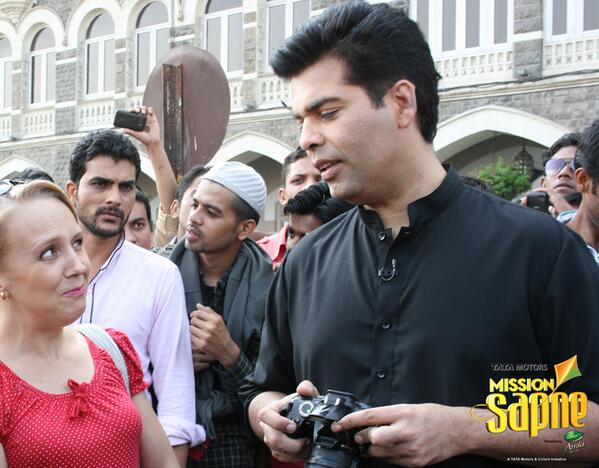 At 5:00 PM:
Karan took photos of young people and gives the 1 INR (as shagun) to Hemant ji and says that he hopes the shagun will bring blessing to him. Karan ends his work at Gateway of India. Karan comes back to the studio along with Hemant Das and karan asks Hemant ji whether he has survived the torture at gateway of India. Karan says that people were trying to bargain like students and there were some NRI’s who gave 500 INR to him, and one person has give him 101 INR with 1 INR as shagun. He regards that lucky coin will bring lots of fortune. He says that he took very bad photographs and his point was to take photos and even cheated as some photos come without pressing the button. He calls the day as Kabhi Khushi Kabhi Gham. Sonali asks Hemant ji what is the difference between his day and Karan’s day at Gateway of India. He says that there is a big difference as after asking 50 people, it might be the case that only 1 person agrees for a photo for 20 INR. 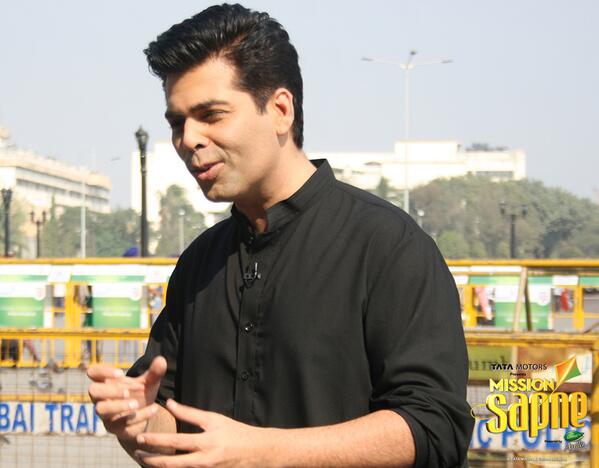 Sonali invites Hemant ji’s son Rajesh on stage and the net amount after deduction (200 INR for printouts and paper) is 4,670 INR which will be multiplied by 100 times, and the total final amount is 4.67 Lakhs rupees. Sonali speaks with Hemant ji, What will be the first thing that he will do with this money ? Hemant ji says that he will pay back his loans which he owed to people and will also utilize the money for his younger son Dharmender’s education and admit him in a good hostel. Sonali and Karan presents the cheque to Hemant ji. Sonali speaks that one dream is fulfilled and some eyes has seen the tears of happiness and says for realizing a big dream it starts with a small step. She speaks on her start and says that people make this start their mission. She signs off by saying – Mission will continue!

Next Episode: Bollywood Megastar Salman Khan will be coming on the show next week and will work as a Barber for one day. The Dabangg star will fulfill the dream of a common man – Khurbaan who is seen on the stage on a wheel-chair and possibly a handicapped person