Kapil starts the show – Oh masti Bari Raat Hain aur Sone Kudiyon ka Bhi Saath Hai.,Oh Jeena je La Mazaa..Oh Darna Ki Kya Baat Hain.. Na Na Ra Re.Ra.. Kapil speaks that children like summer holidays and everybody likes holiday but when an official employee gets a festival holiday on a sunday, then he becomes annoyed and cites that he will even scold his child. He says that holiday feeling is like the one when you are with an old college girlfriend who came to you in the absence of your wife who has gone to her mother’s home (maika in hindi). He then cracks a joke on his wife and her mother’s home.

Drashti Dhami comes on the stage and Kapil speaks that just after seeing her, he feels that she is in so much love with him. He further adds as she is so much in awe with him so she puts sugar in the Kheer and salt in vegetables while cooking. She responds that right, sugar is needed for the kheer and the salt for vegetables. Kapil aka Bittu responds that he ate the food in the opposite way to the one Drashti put forward and blames Raju. He says whatever may be the reason but love is there. He wants her to close her eyes and wants to think of the most handsome person on-stage. Drashti says from the time she came on stage, she is just thinking about some special person. Kapil then informs her that Siddhu is like a Saint, and he and laughing Buddha only go on walks together. Drashti walks away from there as she thinks her time is getting wasted. 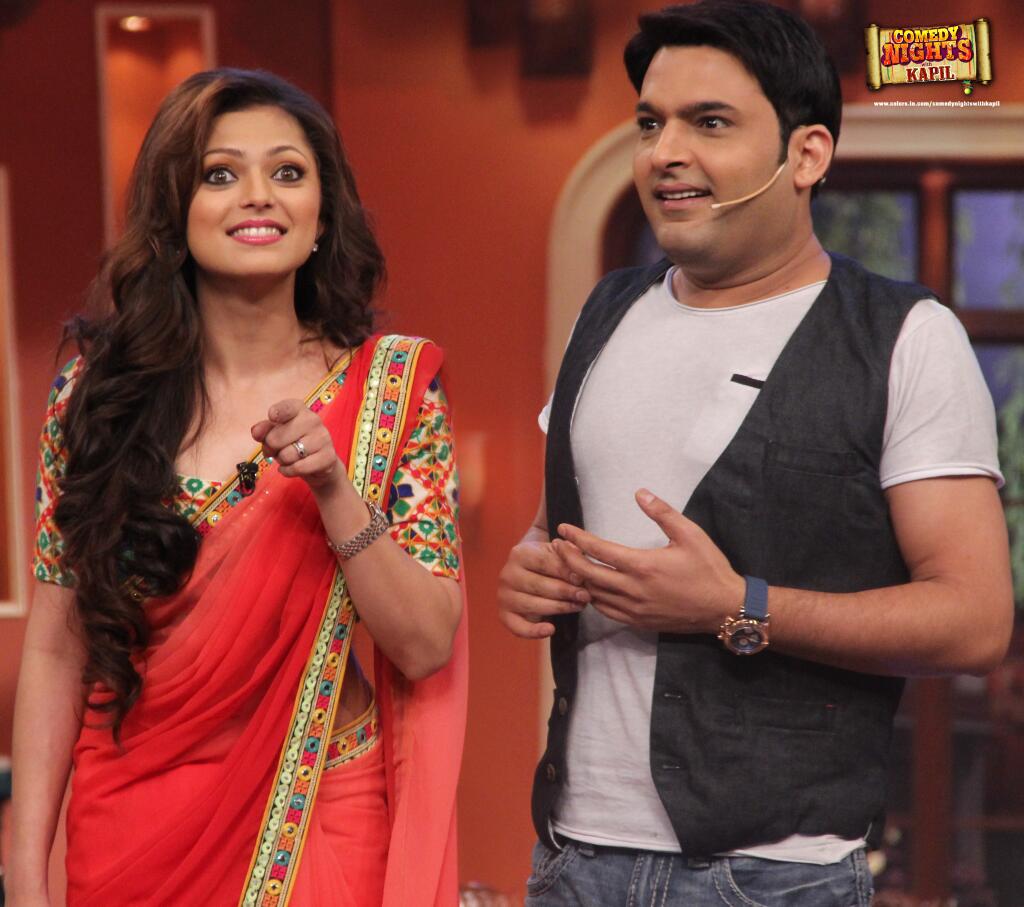 Kapil informs Siddhu that Sonakshi Sinha is coming tonight. Siddhu in turn informs him about his sister who are with them at his set. Sonakshi who is sitting in the audience and disguised as a girl speaks with Kapil. She is wearing a red dress and covers her face with the dupatta while speaking with Kapil, and refers to him as Kapil ji. She speaks that from her childhood she has thought Kapil as his brother and has made a promise to herself that until Kapil doesn’t call her as his sister, she will not lift her dupatta and show her face. She even wants a pinky promise invoking a laughter. Kapil speaks that pinky promise, she is his friend. Kapil hits his heart with dejection and people call him Bhaiya Bhaiya.. (brother…). She comes on the stage
and hugs Kapil. Siddhu speaks a witty line and refers her as the paradise itself came on the earth today. Kapil taunts Siddhu whether he has the same feeling for his wife. 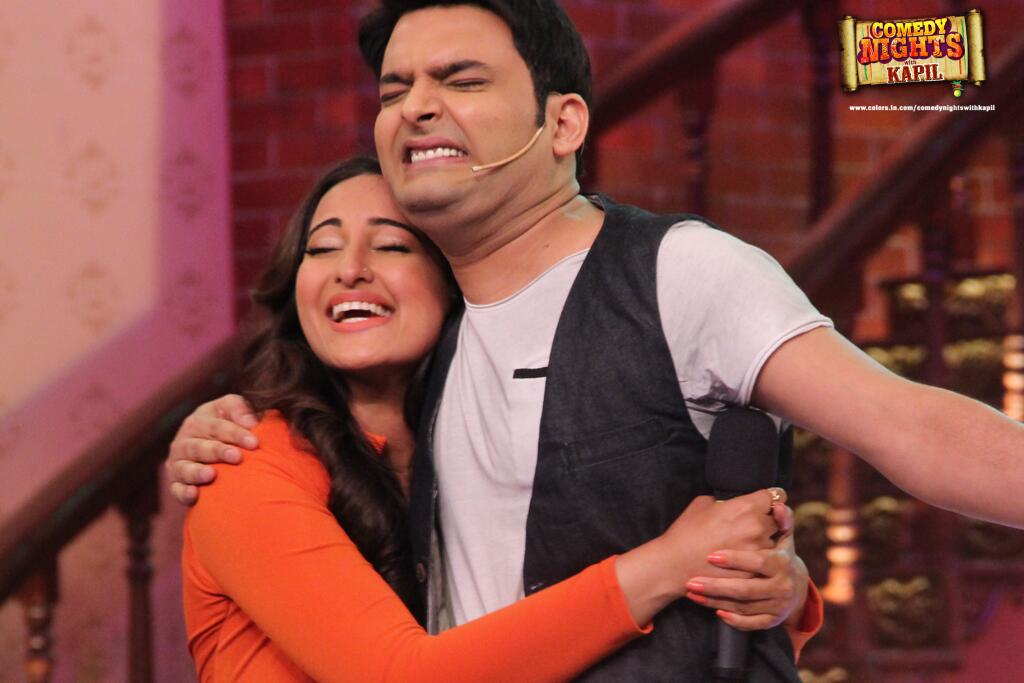 Kapil opens the floor to the audience and Sonakshi’s fans and says ladies are most welcome, and the boys can go outside. 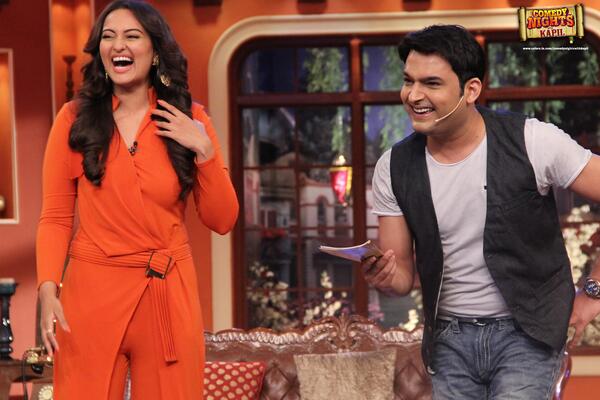 Audience (young boy): calls her Sonakshi mam and speaks that his favorite movie is R. Rajkumar and wants to dance with her on Saree Ka Phaal sa song on stage. Sonakshi agrees and he comes on stage, and kapil puts a condition that he has to wear a saree and dance. The boy agrees to his demand as he can to anything for Sonakshi. Sonakshi speaks, Is he serious? Sonakshi helps the boy in wearing the saree and then both dances on the Saree Ka Phaal song.. He is unable to hold on to his saree while dancing but dances with passion and follows all the dance steps from Sonakshi. Siddu appreciates the boy’s efforts. 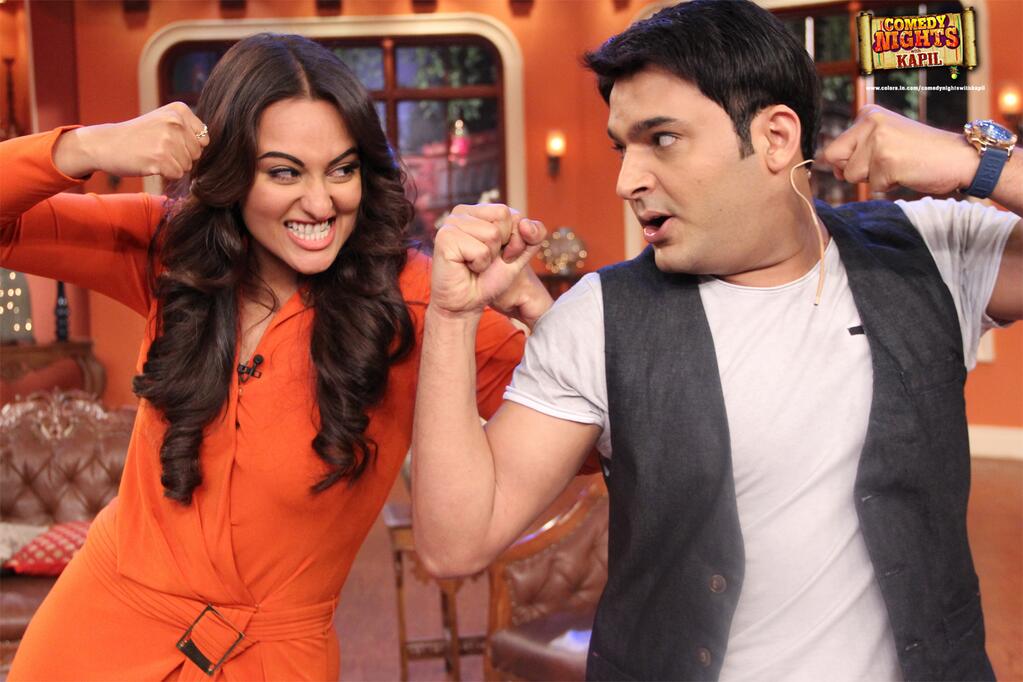 Daadi comes in the stage with a bang while wearing boxing glove and also the dress of a boxer. On the other hand, Pankhudi (palak’s mother) also comes on stage wearing the boxer dress and gloves. She shows some boxing moves. She introduces herself as the number 1 heavyweight champion, 8th time winner, and even stronger than Halakh hogan (spoofing Hulk Hogan). She then falls on the ground and asks for the blessing from Sonakshi. Kapil then introduces opponents – Daadi Dolly and Pankhudi and calls for the boxing match whose referee is Sonakshi Sinha. The boxing match starts and both Daadi and Pankhudi fights it out inside the boxing ring, and even Bittu hits Pankhudi after coming inside the ring..invoking a laughter. The show seems to be hilarious with Daadi and Pankhudi’s cute fight and Sonakshi’s presence will bring much humor from Bittu. Kapil signs off by saying continue to smile, and keep watching his show. Kapil and the audience applauds Sonakshi and the show ends on a happy note on the song – Aaj dil shayrana from her movie Holiday – A solider is never off duty. 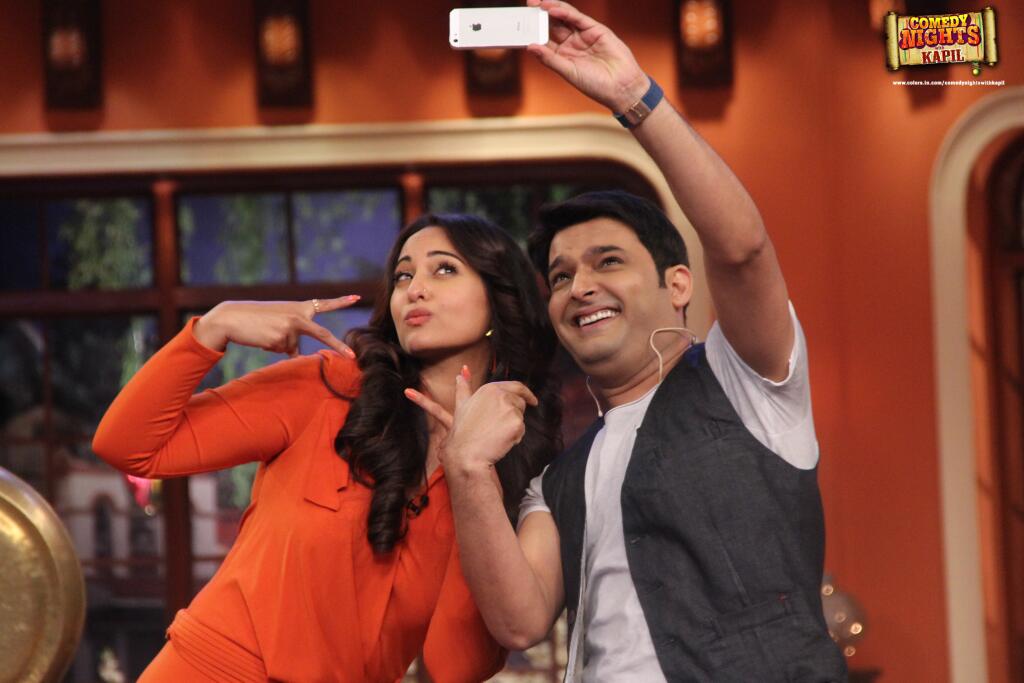