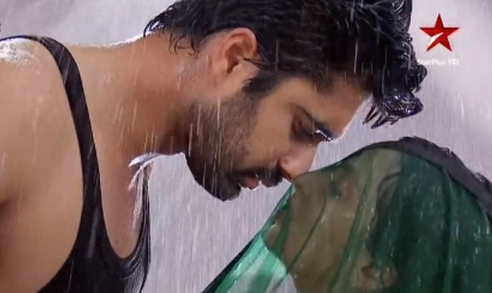 Astha and Shlok, the hot couple who have the capability to drag the audience to the small screen at the unusual early slot, when people are busy in their work. The chemistry between Astha and Shlok is getting on better day by day and viewers love their lovely romantic scenes. The show has been showing romance between them quite often now knowing it’s the reason for the high TRPs.

Astha and Shlok are spicing up their bedroom flooding with naughty romance. Astha is always bubbly and keeps on teasing Shlok. She sees Shlok sleeping and wants to wake him up. She puts an ice cube in his tshirt to which Shlok reacts by putting water on her head. He then draws her closer and kisses her. The maid Sita always becomes the witness of their romance and Shlok wonders her timing to be always right, how. LOL!! Astha and Shlok’s romance will be shown again, when they bump into each other without seeing, and Astha falls on him. Shlok gets a back pain and she does oil massage to his back, which he does not like at all. Shlok gets naughty and pulls her on himself to make love. The viewers will get to see some funny and tickling romance scenes between them.

Talking about the serious lady of the show, Anjali, its sad she has to climb the hot stairs of the temple in the afternoon as Niranjan has punished her knowing she tried to find her parents. Astha comes to know about this punishment and thinks to do something to make it merry for Anjali. Anjali comes in the temple and prays for her parents’ well being. She gets shocked to see her parents there. Is this Astha’s surprise for her? What will Anjali do seeing them? Will she bring out the daughter in her or stick to being Niranjan’s cold blooded wife? Keep reading.