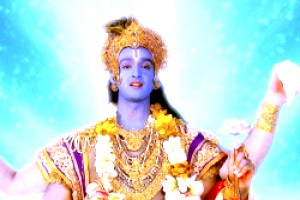 * Krishna enlightens Arjun on Bhakti (Devotion) and Bhakti Yoga
* Krishna shows his divinity as God Vishnu, and also Vishwaroop to Arjun
* Arjun gets Gyaan Yoga and submits himself to Krishna with complete devotion
* Arjun vows to fight the war with full confidence and obeying Krishna’s orders

Note: This Post covers the Mahabharat’s Episode of 12th June 2014, and we have added other relevant information to provide more depth.

After Arjun is enlightened with Dharma, three Gunas (Sattva, Rajas, and Tamas), and Karm Yoga. Krishna starts to speak with Arjun about the meaning of devotion (Bhakti).

After a while, Arjun asks Krishna whether he is God ? Krishna answers that he is God, and then refers to Arjun as God and says that he haven’t realized about it. Arjun then asks if he submits to him then it is equivalent to submitting to God. Krishna replies yes. He wants Arjun to leave everything and come under his patronage. Krishna speaks on his various forms – Surya, Chandra, Nakshatra, all Planets and all the people, the decision maker for paradise and the hell, and he is also Duryodhan and he is also Arjun. Krishna speaks about his many births and Avatars, many bodies which have ended in soil: and in future he will get born again.

Arjun then speaks that he knows that Krishna’s mother is still alive, and many people have seen Krishna in that era so how come he has taken many forms before. Krishna responds that Arjun is again talking about body and not soul, and reiterates that he was referring to soul. Krishna speaks that whenever Adharm is increased, for destruction of Adharmi, he is born, and it used to happen in every generation (Yug). He has many incarnations of Parmatma, Pashuram, Ram Chandra in the past, Brahma, Vishnu, Mahesh, Saraswati, Kali, Lakshmi. He is neither male nor female or not even dysfunctional. He is knowledge, enviroment, chetan (conscious). He is everything, and also he is nothing..[Krishna Govinda.. tune playing]. It used to happen in every generation of the world and also it will happen in the future as well.

Krishna says that when Arjun finds the knowledge with his soul then he will be like him, and see himself attached to Krishna, and even thinks himself as the form of God. But Arjun has to submit himself to Krishna by mind first. Krishna speaks about the submission when human sacrifices everything (no decisions or promises made) and acts according to the works given for him as his duty. The submission essentially means self, knowledge, mind, hope, expectations have to be submitted and this is called devotion (Bhakti). Arjun then speaks on different commitments, Wife – husband, Soldier-Senapati(Commander), Guru (teacher)- Shisya (Student). He asks Krishna, Are all this also equal Bhakti ? Krishna speaks submission to a bad and Adharmi person make your acts bad and you will do an Adharm as well. Krishna then cites the example of Angraj Karna who spoke abusive and demeaning words for Draupadi in the Yud Sabha as he had submitted himself to his friend Duryodhan (a bad and Adharmi person). Therefore, submission should be made to oneself, and for a better person there are many bhakti’s but the best bhakti is of the God.

Arjun then asks Krishna how Bhakti relates with Karm yoga. With Bhakti towards God, gets the knowledge of God, and by immersing with God you will become God. Krishna cites an example of water drop how it merges in the sea after falling into it, and becomes sea. Arjun then asks whether the body doesn’t have any importance ? Krishna responds that the body is the medium through which the human sees God.. The soul’s development and downfall could only be possible if it resides inside the body.

Krishna speaks that Arjun’s enemies are having Adharma and they cannot be taught the righteous things now and is impossible to correct them, and speaks that the offender has some limits to correct himself beyond which he should get punished. Krishna speaks how he has given punishment to Shishupal after letting go 99 times his abuse. And just after 2 crimes after 99 abuses, he got punished because he broke his limit. He speaks that allowing crimes to happen will lead to more crimes, and stopping the Adharma is the Karuna (mercy). Furthermore, the souls won’t die and will only leave the Adharm bodies and will go into new bodies and there they stand a good chance to progress positively. A body equates to wealth and also respect. For having Dharm – the body should be clean, and then soul will get its due respect. Krishna then speaks on Kshetra Sambandha which equates the body to portion (ansh) of the earth. Such a soul will have less Tamas and more Sattva gunas, and thereby devotion is strong, and can easily come close to God.

Krishna reiterates that devotion (Bhakti) is the first step to submission as it is not a work but a state of mind. Whatever you earn or make profit of should be submitted to God. Krishna speaks that mind many times tries to disconnect with God, and therefore we need to remember that our life is to be submitted to God always which is called Bhakti Yoga – submission to God with Satva Guni wealth. Without reason and for own self-benefit involving in violence is also Adharm. Non-violence is the first Dharm and along with it -Truth, Sacrifice, showing mercy (karuna), getting rid of anger, peaceful mind, no sarcasm, not attached to get satisfaction, without reason doing no work, Tej, forgiveness, patience, cleaniness of body, not joking of Dharma, and not to have ego is referred to as ‘Davi sampati’.

In this way, humans need to worship God which is him (Krishna). He suggests Arjun to follow his duty so that Dharm is established. He gives his word that without any doubt, he will make sure that Arjun will get contentment in his life during this birth, and after death will get a place inside him. Arjun speaks about his learning, first about soul and its eternal quality which will live in his body temporarily. He then speaks about Karm Yoga which taught him about sacrifice, and not to keep expectations for bearing fruit, and only to do work which will give him peace and success. Bhakti yoga has taught him submission to him (Krishna). After this, Arjun reiterates that he is only seeing humans there, and then bends down and sits on his knees and seeks the true divine form of Krishna – power, knowledge, Tej, Aishwarya and with his requests all his doubts will go away.

Krishna shows Arjun his true form which is of Vishwaroop and shows the universe with planets revolving around him, and then holds the planets in his hands. Later on, Arjun sees all the avatars of Vasudev Krishna. Krishna in Vishwaroop form speaks that Karm yoga leads to Bhakti Yoga which in turn leads to Gyaan Yoga (also called Sankhyog) and informs Arjun that as he has seen the vishwaroop which means he has also seen the knowledge which is the base of all inventions and knowledge in the world. It even gives you salvation (mukti) and also informs Arjun that even other deities couldn’t see his vishwaroop darshan easily but Arjun was blessed in seeing it. Krishna then speaks that Sun, Moon, planets lies inside him.

After knowing all about Krishna and his divine darshan, Arjun submits himself fully to Krishna and pledges to follow each and every order from him. Arjun then holds on to his Gandhiv (bow of Arjun) which he has earlier kept it down, and is seen with Krishna in his chariot at the battlefield approaching towards his opponents with full conviction and vigor. (Krishna has already decided to become the chariot driver or Sarathi of Arjun).

* Some of the questions are,
– How would Arjun instill the same amount of confidence and devotion in his brothers specially Yudhishitir ? [Earlier, Yudhistir was very adamant to not allow Shikandi in the war]
– Bhishma has already blessed Pandavas’ and wished them victory, How long would Bhishma fight Pandavas, when would Shikandi come in the war leading to the downfall and killing of Bhishma at the hands of Arjun ?

Additional Info:
* Vishwaroop is considered as the supreme form of Vishnu since the whole universe is described as contained in him and originating from him. The most celebrated description about it is in Bhagavad Gita, “the Song of God” as told by Krishna in the epic Mahabharata which describes him blessing Arjun with his Vishwaroop knowledge at Kurukshetra just before the start of Mahabharat War. Read more on it at its Wikipedia page.