Kapil welcomes all, and the actors and the director who were lying on the sofas and Siddhu asks them to wake up and cites the example of Kumkaran (who used to wake up after every six months). Kapil again welcomes Saif, Riteish, Ram and Sajid. Kapil then speaks that whenever Siddhu sir’s energy is down thats because of not seeing heroines on stage. Sajid then invites his film’s heroines Tamannah Bhatia and Esha Gupta. Both actresses come on stage (Aaja Aaja song playing in background). Kapil hugs them and wants them to take their seats though all the boys have occupied the seat and they tease the girls and doesn’t allow them to sit on the sofas. The boys asked the girls to sit on the seat of Siddhu who in turn offers them his seat bringing laughter on their smiles. 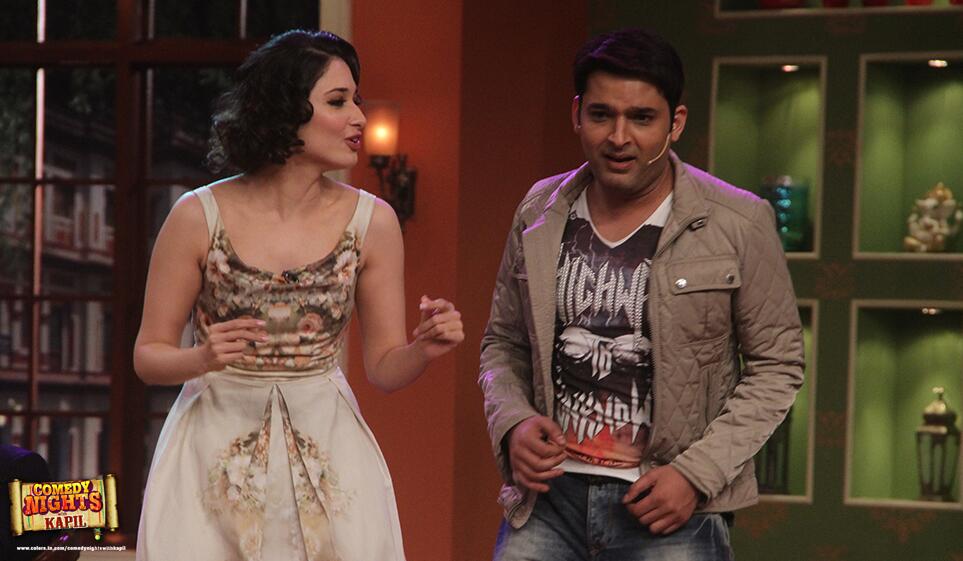 After that, Riteish speaks a funny line that as Siddhu belongs to Cricket fraternity so he likes fine legs (teasing him on his favour to give his seat to girls). Sajid steps in and compares the need of Siddhu on CNWK sets by citing the example of Pau-Baaji and says that if Pau is missing from Baaji then you will not get the taste and the same goes with Siddu on Kapil’s show invoking a laughter. Thus, to give seats to the girls, the boys sit on the floor and the girls take the seat. Kapil asks the girls what they eat since long time such girls are not seen in public so slim and fit. Tamannah and Esha speaks that they don’t eat food and also not given food. Kapil then speaks more on their slim body and delicate walks and he enjoys those moments. Esha responds that they are happy if people like their moves and walks invoking a laughter. Kapil then asks them what kind of husband they want ? Esha replies the one who hosts a TV show in a flirting manner, the one with brown jacket and Tamannah speaks also the one who has a goat at his home. After hearing those words, Kapil feels he is the lucky boy about whom they are talking about and even thinks to color his jacket to brown fully, and then calls his wife Manju (Mrs. Sharma) and informs her to not come back and says that we are just divorced bringing laughter. 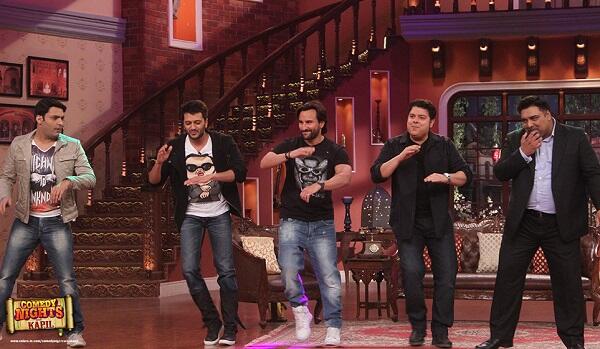 Next, Daadi comes on the stage on a bang and speaks while holding a loud speaker and makes an announcement. She informs people with a series of “If’s” (Yadi), If your food is not digested, If you have money in your pocket but you cannot buy jalebi (sweets) then you stop worrying dear people because now we have in our city a YuDaadi hospital. She calls the hospital as her business and soon finds Sajid to be sleeping on the sofa. She also cracks a funny line that he is sleeping with 3 boys and calls Ram the youngest of all, and suggests that Ram is the one who steals Chawayanprash and eats without informing his brothers. Daadi then comes to Sajid and calls him as Farah Khan (his sister) and speaks that she (Sajid as Farah) has done two good things, the first being that she has done a hair cutting because of which she looks cute, and the second being that she didn’t came with her brother Sajid and calls him as Pakaoo (talkative fellow). Kapil then convinces Daadi that Sajid is there on stage and not Farah. Daadi then wears her glasses and looks straight and hugs him, and speaks the same words which she spoke earlier. She reiterates that it is good that he didn’t bring his sister Farah on the set since she is very talkative invoking a laughter. 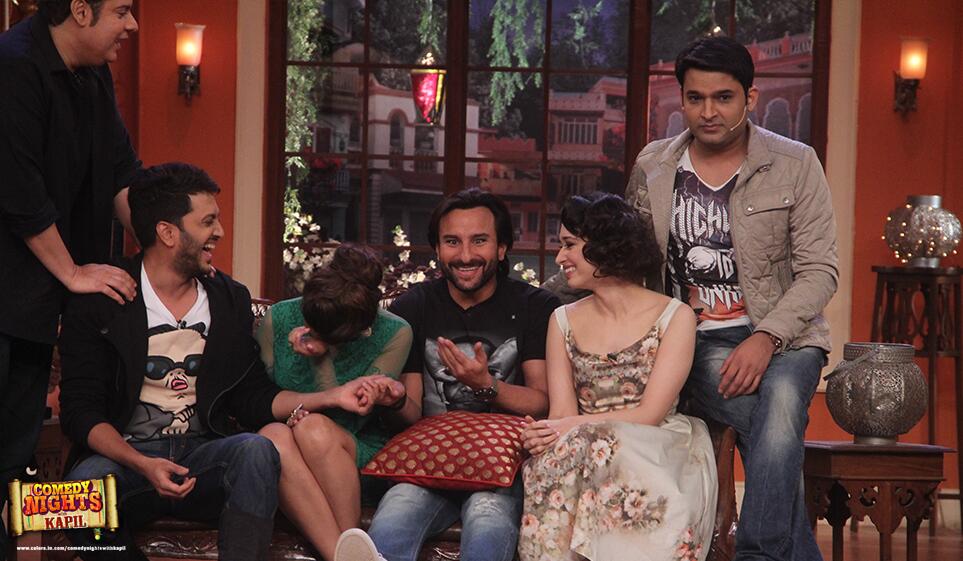 Daadi then brings a box of medicines, and talks with Ram and informs him that he just need to follow her. Daadi enacts the activity which is as follows – (1) Ram need to open the box, (2) Drop the medicines on floor, (3) Hold the box with his legs, and (4) Pick up the medicines from the floor and put it back in the box. (5) Iteratively repeat the same… Ram Kapoor agrees to do the activity, and she speaks that whenever he bows down to pick medicines then from his behind everything will go away bringing much more laughter on that note. After that, he will also be stunned like Riteish.

Sooner then, Kapil opens the floor to the audience who are fans of Humshakals team. A middle-aged women from audience speaks that she finds Ram Kapoor to be very sweet and wants to do a love scene with him. Kapil responds that Ram became sweet after eating many sweet delicacies. Riteish helps the lady on stage, and she informs that she is ready for the scene and suggests the audience to either see or close their eyes if they prefer invoking a laughter. She speaks that she never misses any scene of Ram so now he has to kiss her. She reiterates that who has seen tomorrow so don’t want to miss this opportunity. Ram then asks her, Is she ready ? She replies that she is ready since birth bringing more laughter. Ram showers a kiss on her cheek and she returns a gratitude. Kapil signs off by saying his viewers to keep smiles, have laughter at their homes, and also to keep watching his show on Colors. The shows ends with the team of Humshakals dancing with Palak, and moreover Riteish shows his moves to Palak with song – My God Mera Liye Tu Aaja..Aaja Re Aaja.. My God Dil Todke Na Jaa playing in background.