Jhalak Dikhhla Jaa 7 is in the second week of its run and has been joined by an internationally acclaimed judge -Maksim Chmerkovskiy. The Guests on the Show today are: Superstars Siddharth Malhotra and Shraddha Kapoor for promotion of their upcoming film – Ek Villain.

Peformers tonight:
* Akshat Singh dances with his partner on the song Tuna Mari Entry Dil Mein Baji Ghantiya song
– He also dances with the international judge Maksim on a popular Dhinka Chika song along with Remo.
– Akshat wears black dress depicting a Spanish Bull while his partner acts like a bull fighter. He gets a praise from Madhuri who speaks that he just nailed it.
– Dance form: Pasodoble and Clowning

* Kritika Kamra dances in a pink dress with her partner Savio with a refreshing and cheerful look on her face.
– Dance form: Jive and Jitterbug
– Song: Slow Motion Angreza from the movie Bhaag Milkha Bhaag.
I just met a girl…And she is from volo molo volo molo wonder..I can dance and she can sing…We can rock the whole night longer I can dance, she can sing..Woolo..wonder..
– The lyricist is Prasoon Joshi

* Sophie Choudry dances with her partner Deepak on an eventful music tune without lyrics. The tune was from the song – Raat Akeli Hain from the movie Jewel Thief
Dance form: Bachata and Kizomba

* Andy dances with his partner on the dance form – Zouk and Reggaeton.

Siddharth who is a guest on the show sits on his knees and sings a song very passionately for Madhuri and the song is – Teri Galiyan from his movie Ek Villain. He then dances with madhuri on stage on the same song, and Karan becomes much amused after seeing their chemistry. 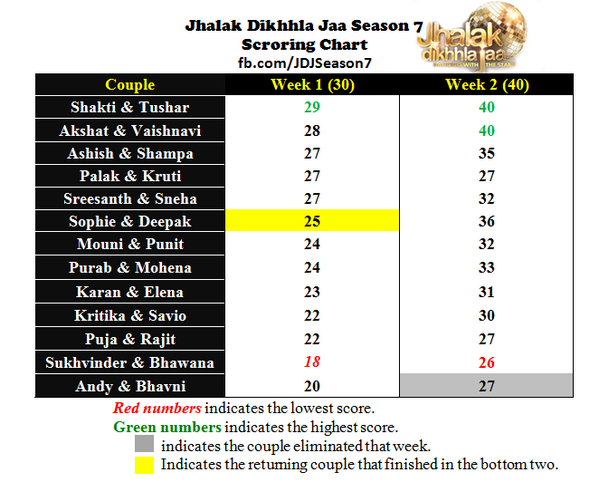 Elimination: Andy has been eliminated from Jhalak today. We wish the best to Andy in his future endeavors.

Twitter Chat on 16th June: International judge Maksim will be on chat on Twitter today @ 7 PM IST and replying to your questions, so if you have any questions post it on twitter and use the hashtag – #AskMaksim at the earliest.

Next Week Dance Theme: Made in India where the contestants will dance with Indian desi flavor (tadka).
Some Update on 18th June, 2014
* Ashish sensual dance with his partner Shampa on the song Har Kisi Ko Nahi Milta Yahan Pyaar Zindagi mein (from movie BOSS, 2013)
* Shakti Mohan fulfills her dream of dancing with Madhuri on stage
* Akshat grooving with his partner on the Havan Karenge song from Bhaag Milka Bhaag
* Dolly Daadi from CNWK will come on Jhalak to support Palak.
* The cast of Meri Aashiqui Tum Se Hi (Ishani and Ranveer) will also visit Jhalak.