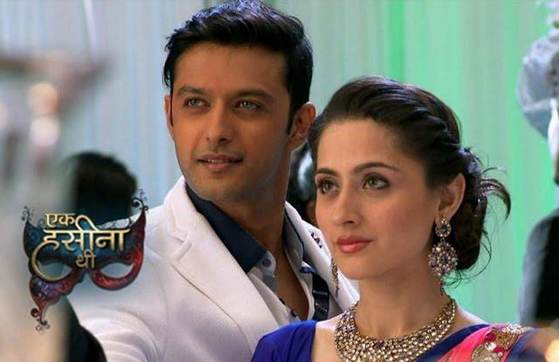 Durga has finally motivated Sangeeta and Sagarika, to make them speak against Ganguly in his anniversary party. Shaurya makes a DVD on Ganguly’s honor and Durga changes it cleverly. The video plays and everyone is shocked to see how Ganguly exploited Nandini by blackmailing her and admitting that he has done the same with many girls till now. He tells her that how he sold fake degrees to all bigwigs and also to some girls who agreed to his demands. Ganguly is exposed to be a cheap character man and also a corrupt vice chancellor. He was contesting for the post of Education Minister, but this one video has turned down all his dreams and ruined him. Sagarika and Sangeeta show his true face to everyone by telling them what a creep Ganguly is. The Goenkas are shocked and think to break their association with Ganguly. Sangeeta is going to apply for divorce and would take all that he has, as its her right.

Rajnath is impressed with Durga as she has defended them infront of the media. Sakshi wonders why Durga did this and doubts on her intentions. Dayal comes to meet them with Durga. Sakshi feels Durga always brings bad news with her and gets tensed. Dayal shows them the headlines in the newspaper, that Shaurya is exposed in fake degree scam. Dayal fumes on Rajnath for lying to him about Shaurya’s education and buying a degree for him, how could he hire Shaurya as the chief architect of their project. They come to know that Shaurya has bought his degrees from Ganguly by giving him a hefty amount and also took his help to make the design presentation. Dayal insults Rajnath and says he won’t bear such a big fraud, and he ends their cancer project deal. Rajnath is stunned and is angry on Shaurya for getting involved in his business.

Akash is always helpful to Durga, but wonders why is she targeting people to take revenge for Payal. He tells her that he will always support her, no matter she discloses the truth to him or not. Durga is thankful to him. Dev sees Durga dancing in rain, enjoying and loving it. He thinks about Nitya who also used to do the same. This attracts him to Durga and they both have a romantic rain sequence. Dev started doubting Durga, and thinks of her glorious smile when Ganguly was exposed in the party. He thinks Durga is mysterious and he has to find her secret to know about Nitya and Payal. Will Dev succeed in knowing Durga’s real identity? Keep reading.