The show first starts with Kapil, Siddhu, Yuvraaj, and Harbhajan in an open area and Siddu carrying the microphone so as to give a commentary since some cricket is played there with Yuvraj batting and Harbhajan bowling. Siddhu speaks that the ball will fall in Airhostess’ lap and Kapil cracks a funny line on Siddhu saying that he even forgot commentary and always include girls. Siddhu responds that wherever there is honey you can find honeybees as well. bringing laughter. Siddhu wants Kapil to bat and Kapil then faces a ball from harbhajan and runs away from the field with bat on air, and comes to CNWK’ stage. 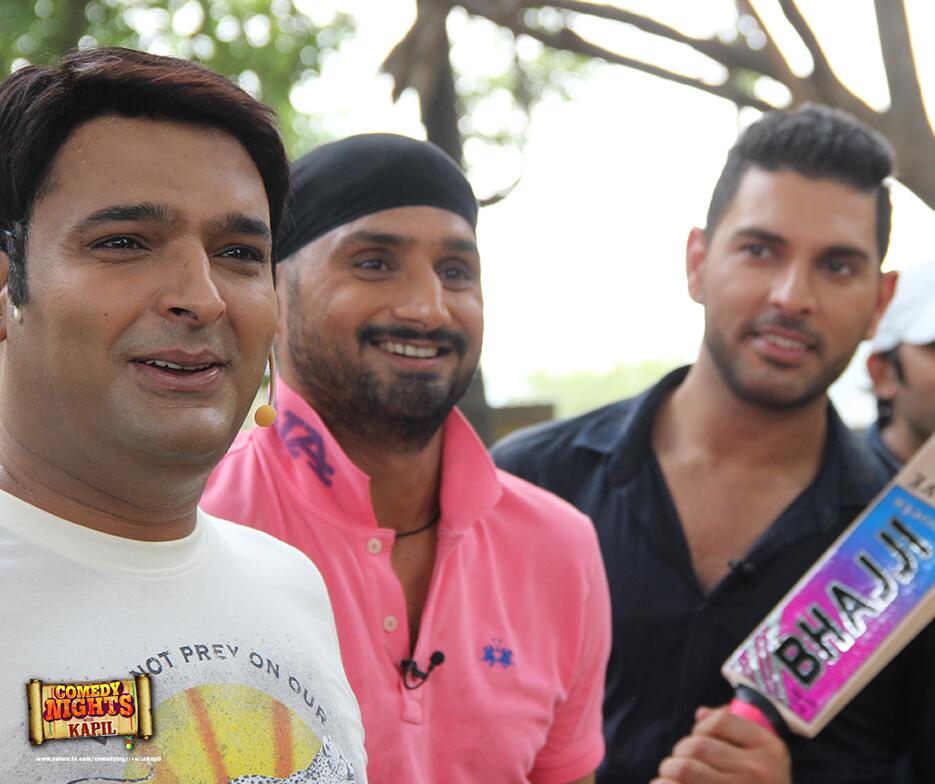 Kapil then welcomes Indian Cricket’s life – Harbhajan Singh and Yuvraaj singh.. (Duniyo Hain Bidgaye Hain..). He calls them Jai and Veeru of Indian Cricket team. Siddhu speaks that Yuvraaj has done so many things on the field but he has done much more off-the field referring to Yuvi’s battle with Cancer and successfully coming out of it. Siddhu speaks that people think Cancer as death but when they see Yuvraj they think Cancer as life bringing much applause from audience. 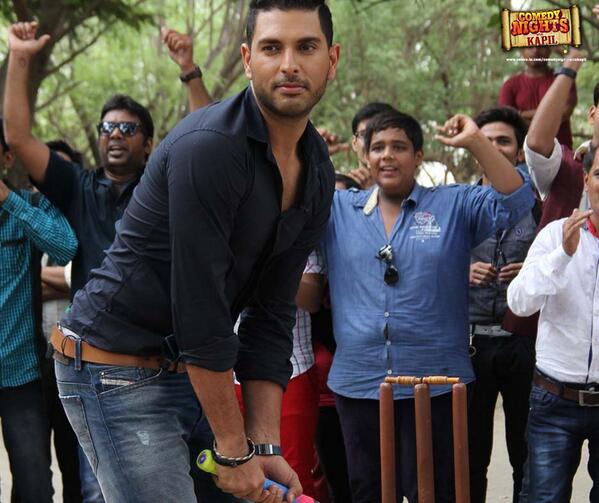 Yuvraaj shares an anecdote from New Zealand tour and on one occasion he was with Virender Sehwag eating a burger and during that time an Indian came and asks to Virender (Viru fondly called), Are you Virender Sehwag? Viru responds Yupp. Then that man asked Viru, How do you like New Zealand ? Viru again replies Yupp.. bringing laughter..Harbhajan shares an anecdote about Punjab team. He speaks that when he was in Chandigarh Academy there was an event organized by Sports Authority of India. He was a young boy and was listening to other boy’s introduction. He patiently listened the first boy’s name from Hyderabad, the second one from Bihar, and so forth and then when his turn came, the sports authority asked the question in reverse sequence – Where you from ? He replies Harbhajan Singh. What’s your name ? He replied Jalandhar.. invoking a laughter.

Yuvraaj wants to share another anecdote about a foreign tour with seniors. He went there to a restaurant, and they don’t know the english dish names. First, one of the them ordered a cold drinks, and when the waitress brought it, a colleague then spoke sit down, and the waiteress sat down, and then he replied that cold drink to be sit down…laughter. Yuvraaj also shares an experience of his academy days where boys don’t know english and study much, and when they were told to write about their mother tongue, and the boy wrote pink. Kapil opens up the floor to the audience and one young man Hitesh speaks that wherever he goes people speak that he is shy so he wants Harbhajan and Yuvraaj – Yuvi sir to teach him how to open up (khulna) in public. Furthermore, Yuvi and Harbhajan paaji grooves with audience plus Bua on the Tamanche pe Disco song from the movie Bullet Raja and are in upbeat mood with them.

Hitesh comes on stage and Kapil speak that Yuvi knows the strategy to open. Yuvi and Harbhajan make him lie on the floor and wants to open him up by pulling his legs and hands and then suggests that he is not opening up making audience in splits. Hitesh then sings the song – Duniya Main Hain Kitni Nafratein.. from the movie Mohabbatein with audience showering with Waah Waah sound during his singing. Daadi comes on the stage, and calls Yuvi and Harbhajan miscreant (Badmaash in hindi) and Yuvi calls her Daadi and she calls him a liar. Bittu then decides to enact a Deewar movie scene with both of them with Bhajji becoming Sr. Bachchan and Yuvraaj donning the role of Shashi Kapoor and Daadi carrying the role of their mother. Daadi first shrugs off the role of a mother and then performs as the mother, and calls her sons as Twin towers, and she herself stands on the sofa so as to look taller than them. Harbhajan acting as Sr. Bachchan speaks the dialogue – I have off-spin, leg-spin, Doosra, Teesra, What do you have ? by spreading his hand in the same way like Big B.

Sooner then comes the turn of Yuvraaj who is acting as Shashi Kapoor. Yuvi speaks he has a Sixer (Chakka) making Daadi surprised since Daadi wants him to speak the dialogue of having mother. Harbhajan speaks second dialogue that he has a car, buildings, What do you have ? Yuvi replies that even those things he also possess though Daadi tried to influence him in saying that he has mother. Thereafter, Harbhajan decides to give their mother to Yuvi but Yuvi doesn’t want to take her since she drinks a lot. Daadi asks her sons where she should go to – Yuvi or Harbhajan in a heavy and emotional voice ? Harbhajan also suggests that he cannot take his mother (Daadi) because she has a problem of releasing gas in morning without any notice (alarm)..bringing laughter. Daadi speaks a dialogue – Maa ki Aankh Kar Di to vent out her anger. Bittu reiterates that they are right since alarm is only good for hearing, and not for smelling via noise taunting on her releasing gas and gives that example. 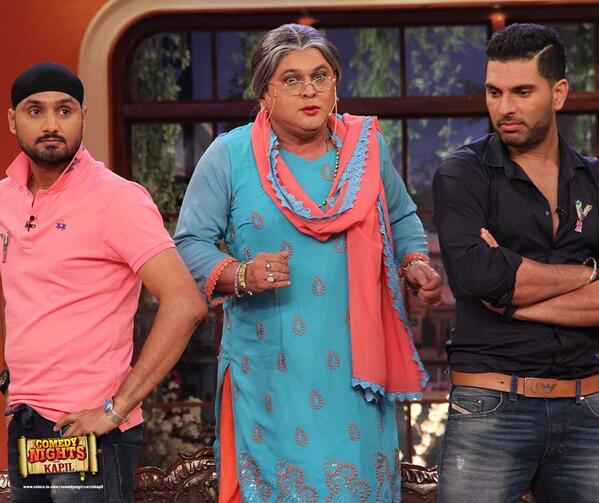 Kapil speaks that there is an unknown secret which he wants to share which is Harbhajan is also a good singer and then both sings – Dama Dum Mast Khalandar Ali ka Pehle number sufi song. The show is hilarious with Daadi, Pankhudi (palak’s mother) and Bua having good and rollicking time with Yuvi and Harbhajan paaji. Kapil signs off by saying- be happy at home, have smiles and do sing, and keep watching his show on CNWK on Colors every Sat and Sun @ 10 PM.

Additional Info:
* Incidentally, Harbhajan singh will also be seen on Colors Mission Sapne tomorrow (22nd June) and will work as a Namkeen (Snack) vendor on the streets of Chandigarh.
* Comedy Nights With Kapil celebrates 1 year tomorrow, Congratulations to Kapil and the team of CNWK from TellyReviews !