Kapil welcomes all and speaks with Siddhu about his visit to buy vegetables at the market. He speaks that vegetables such as Bhendi (ladies finger) are expensive and people pay the same amount of vegetables as that of auto rickshaw costs bringing laughter. He then cites an experience of visiting the crowded mall where he cites that if his 5-rupee coin would have fallen down then it will take 3 hours to reach the ground because of the crowd. He informs that much delay was caused because he himself wasted 3 hours for 5 rupees invoking a laughter.

Kapil comes as a dairy farm man and sings Panipat, Sonipat, Ambala, Patiala were shaken, O Gudiya and grooves while bringing his buffalo on the stage. Kapil wears a Dhoti and greets her and makes her fall down and introduces himself as Lallan and both hug each other. She speaks that last time when she saw him he was very small (Itna sa tha tu.. with her fingers), and he responds that Daadi was also small. Daadi smiles, and both share a joke. Lallan speaks that since he is a farmer, and his crop was just cut so now he has four idle month. So, he decided to come to visit Daadi during this time and wants to become a hero.

Daadi asks him whether he has a story. Lallan speaks that he can do varied roles like that of SRK, Ranbir Kapoor, but heroine should be Sonakshi Sinha since he is from Patna and even she is from Patna. Daadi suggests him to also take Brad Pitt in his movie which is a taunt. Sooner, Raju comes dressed as SRK in Mohabbatein movie with a violin in his hand and want to catch Lallan. Daadi also tries to catch him but he instead speaks why they are going to catch him, and then lallan runs away with his buffalo and followed by others.

Kapil again welcomes all, and introduces Karisma Kapoor and her cousin brother Armaan Jain who is making his Bollywood debut with his movie Lekar Hum Deewana Dil. Kapil refers Karisma as the gorgeous and the one who has given so many hit movies, then she comes on stage on the song Le Gayi Le Gayi. Armaan comes on the stage on his upcoming movie’s Lekar Hum Deewana Dil title song Khalifa. He came running on stage and felt slippery but hold on to not fall down.

Kapil wants Karisma to speak about her family from great grandfather Prithviraj Kapoor until the new generation of Armaan. She then speaks on her family hierarchy starting from her great grandfather – Prithviraj Kapoor, then her grand-father Raj Kapoor, Shammi and Shashi Uncle, Dabbo, Chintu, Chimpu, Ritu aunty, Reema aunty (mother of Armaan), Shammi’s uncle family (Aditya and Kanchan), and Shashi Uncle’s family (Kunal, Karan, and Sanjana) and the 4th generation are Karisma-Kareena, Ranbir-Ridhima, Natasha-Nikhil (Delhi), and Armaan-Adar. She says there will be more children to come and speaks that Ranbir, Armaan will have kids. Then, Kapil asks Armaan whether does he have kids. Armaan candidly speaks that he has children in New Zealand and Australia who are there to study there bringing smile on Kapil’s face.

Daadi comes on stage and pampers Karisma and touches her chin, and asks her how is she while showing love. Sooner, Armaan comes from behind and kisses Daadi with much passion and completely on her. Daadi becomes amused and see Karisma and the co-lead of Armaan. She asks God to not forgive him since he doesn’t know what he has done. On other end, Armaan shows an apology sign to Daadi invoking a laughter. 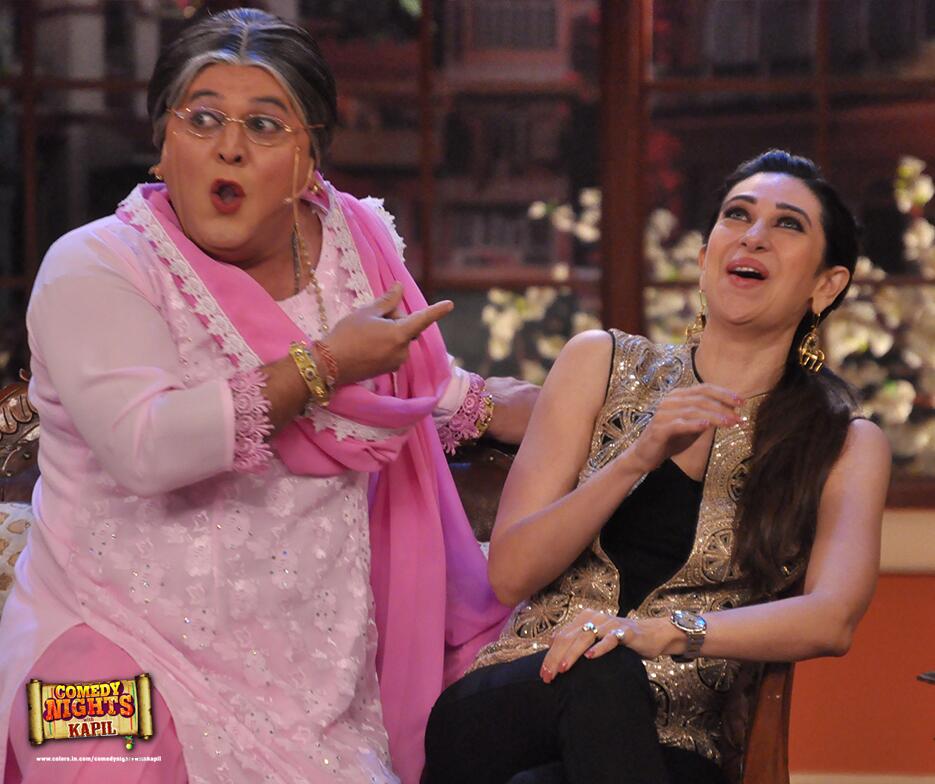 She goes back to speaking with Karisma and asks about her uncles Dabbo and Chintu, and she replies both are fine. Daadi confesses her love for Chintu (Rishi Kapoor) and speaks that after seeing so many movies of him, she started to look like him and then puts forward her face. And even last week, she was speaking like her uncle Chintu, and then mimics Rishi Kapoor’s voice bringing smile on the Deeksha Seth (actress paired with Armaan in the movie) and Siddhu. 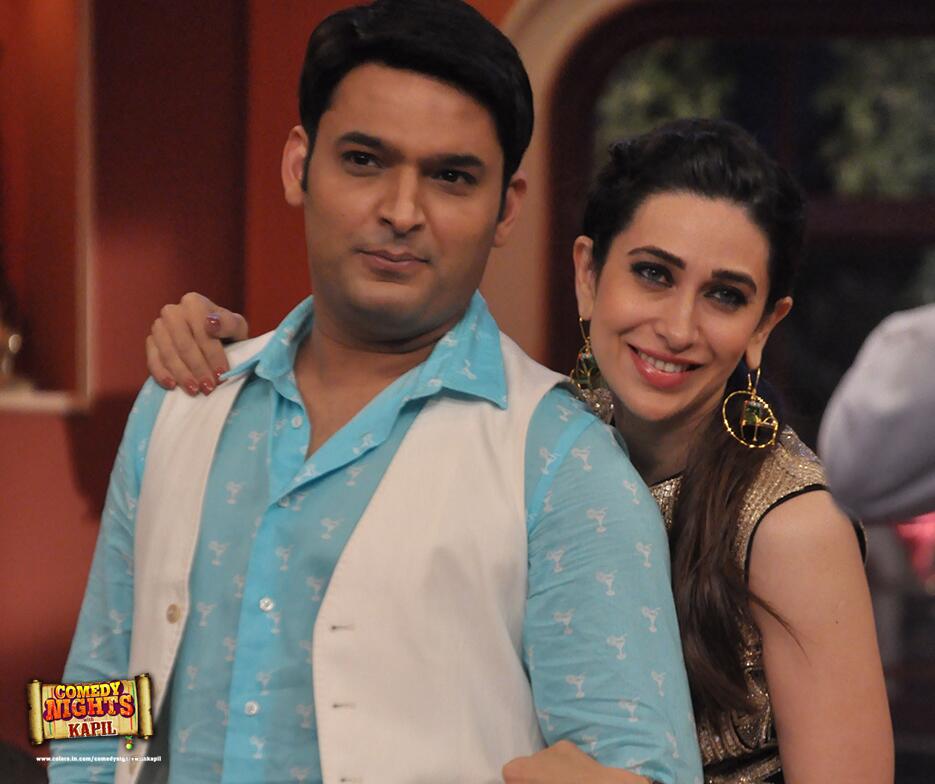 Karisma dances with a young boy from the audience on the Sundara Sundara song with much grace and openness. Kapil wishes best to Armaan and Deeksha for their upcoming movie, and also thanks Karisma for coming on his show. Armaan hugs Kapil and the show ends on a happy note with Daadi teaching Karisma, Armaan, and Deeksha her signature dance step of moving the legs horizontally in both directions repeatedly with the title song Khalifa from Armaan’s movie -Lekar Hum Deewana Dil playing in background. Stay tuned to Comedy Nights tonight @ 10 PM on Colors. 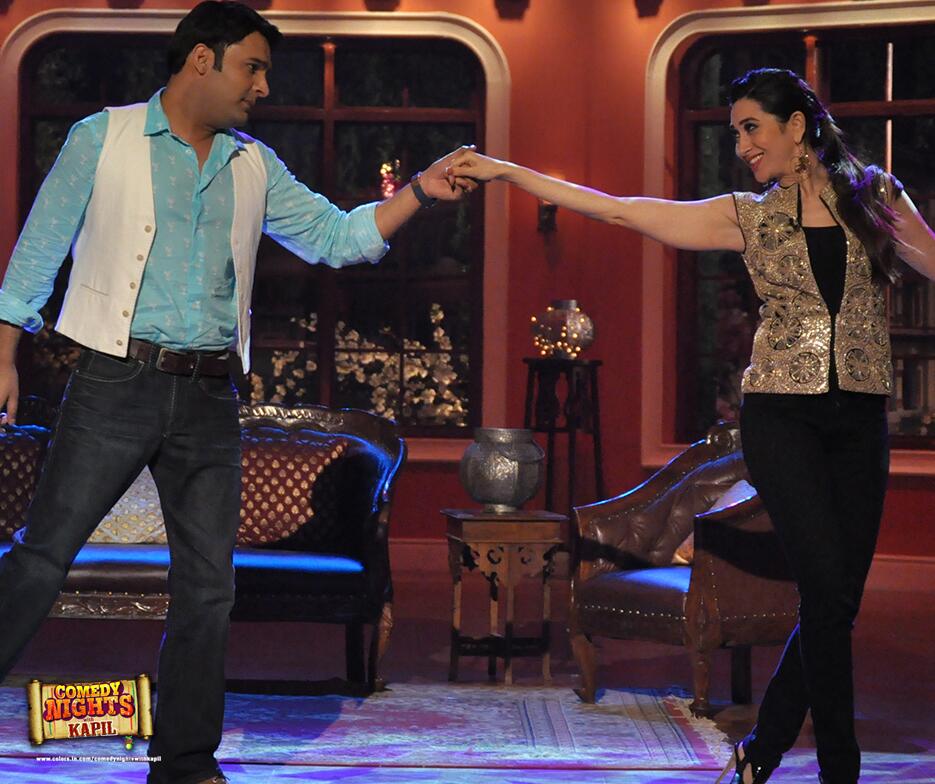 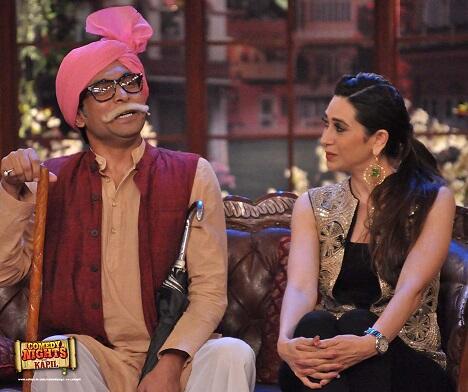 * Additional Info: Armaan’s movie music is by A.R. Rahman, and you can read more about the movie at its Wikipedia page. Wishing Armaan and Deeksha the best for their movie. It will release on 4th July in theatres.