The story is about Aparna Mohan, a 20 year old girl who was studying Journalism in Pune away from her family, and she shares her experience of getting harassed and abused by someone who took a MMS video of her changing the dress at a clothing shop. She recalls on only hearing before about such MMS videos of girls being the victim but after seeing her own video, she couldn’t believe in the first go, and was short of answers.

Theme of the Episode: Fight Against Sexual Harassment; Fight against MMS Video Abuse and Offenders; Fight for your self-respect and dignity.

* Today’s episode will cover Part 1 of Aparna’s fightback story and tomorrow we will see the Part 2 (the final part).

The story starts with Aparna with her friend Kavya at the shop and after choosing a dress, she goes inside the changing room for trying the dress, and she is been clicked when she undresses herself there without her knowledge. Aparna calls his friend Abhay who feels to take her call and he asks whether she went to the shop. She feels glad and thanks him for informing about the shop. He then invites her for dinner but she cites about some project work, and he feels a bit sad on hearing the rejection. Kavya advises her to stay after him and says that though she used to have crush on him earlier but as she start meeting him often realized that he is not a good person. Aparna after hearing this doesn’t speak much and tried to ignore that talk about him.

Aparna comes home and looks at the mirror with the pink dress that she just bought, she then gets a call from her mother and learns that her mother is coming to her city Pune. She now awaits her parents. Sooner, she receives a MMS with the text message – [Kya Iss Video me tum ho ? Main sure nahi thi iss liye tumhe bhej rahi hoon..plz be care ful …In english -> Are you there in the video ? I was not sure and thats the reason to send it to you.. Please be careful]. She becomes a bit worried and then plays the MMS video to find herself undressing at the changing room in the mall she recently visited. Aparna shows the video to her friend Kavya, and cries. Kavya suggests to call the sender of the video Shivani, and Aparna after calling shivani learns that she got the video during net surfing while she was looking for music videos. 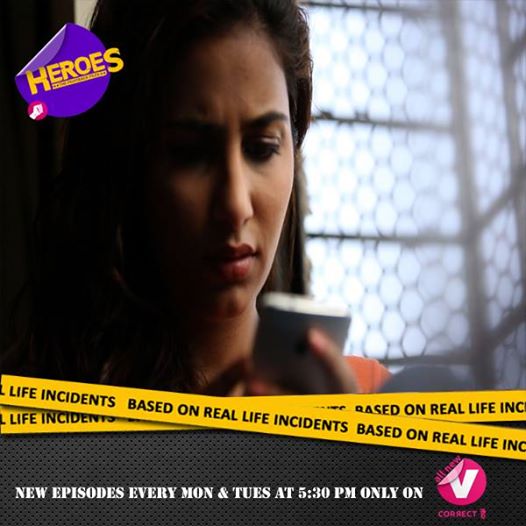 Kavya decides to take Aparna to the police station to complain, and Aparna also calls to Abhay so as to inform him. She speaks in a teary voice with him and informs about her MMS video which even became viral, and suggests him to come at the police station with her. He suggests her to not inform the police since the matter will be much big then and also it will hurt her family. She begins to cry, and he suggests them to go to the store where he will meet them. Kavya highlights that Abhay himself has told Aparna about the store, and she also speaks that since many days Abhay tried to come close to her, right ? Aparna nods her head, and sooner they visit the shop. Abhay also comes there and they look at the CCTV cameras installed there. Aparna and Kavya goes inside the same changing room and tries to look for the hidden camera, and Kavya suggests that there is nothing here instead go outside.

Aparna wants to exchange the dress and learns that the store manager will not come again for rest of the day. Abhay suggests that the store manager might be behind the MMS video since he just left after their arrival at the shop. At home in night, Kavya again looks at her video, and speaks that the video has become viral, and she informs that they need to report it to police. She then learns that Aparna doesn’t want to report it to police since Abhay has suggested to not do such a thing. Kavya speaks to Aparna that Abhay has told her to go at that shop where she was videotaped, and he now wants her to not go to police, she asks her why she is not understanding the chain of events with respect to Abhay’s behavior ? Kavya suggests that they will go together to the store without informing Abhay, and then consoles her friend.

At the shop, Kavya decides to bring the store manager outside since some person from the staff might also be involved in the crime. They speak to him about the MMS video taken at his shop. Aparna informs that until then she didn’t inform the police but if he doesn’t say anything or cooperate enough then she will go to the police. Moreover, he says that never such a thing happened in his shop, and still he is amused much. Kavya speaks that she was indeed videotaped and he then wants to check the CCTV footage to prove his point that the MMS video was not taken in his shop. They go to the footage room in his stop via the backdoor so as to not inform other people about them going there. As they see the CCTV footage carefully after rewinding once, Aparna finds her friend Abhay infront of her room. Sooner, she receives his call on her mobile but she doesn’t attend the call though he tried to repeatedly call her.

The store manager goes from there since he has some work to attend but cooperates with them. Kavya informs him to not ask his employees since some of them might be involved in the crime. He accepts that point and takes his leave. Kavya asks Aparna whether now she is sure about Abhay’s involvement, and suggests that first he sent her to store, and before her arrival fitted the camera in her room, and went away. Aparna speaks that she was not figuring out the mess and her mind was blocked. She speaks that the video became viral in just 24 hours, and also she saw Abhay in the CCTV footage because of these two things, she was blocked. She contemplated that Abhay did that crime because he might have thought that she is not interested in him or she was not going to dates with him. Whatever may be the case, she needs to confront him..

Aparna and Kavya are seen at the coffee shop and soon one boy sitting close to them comments that she looked very hot in the video bringing much dismay to Aparna after hearing it. He doesn’t stop there, and even throws a chit to her with the message – Nice Video, Call me on 942…..(mobile no). Aparna becomes dejected and soon Abhay comes there. She asks him why he didn’t inform her that he visited the shop 30 mins before her arrival. He responds on being there at that time but asks her why is she asking him ? Kavya wants him to clarify more clearly what was he doing there ? Aparna then directly asks him with courage whether he went shopping or to put camera in the changing room. After showing displeasure, he informs Aparna that he went to the shop to purchase a gift (dress) for her because of which he called her for dinner and wanted to give her a surprise.

After listening to Abhay, she thinks that she had over-reacted and apologizes to him. He then speaks of a website which he found recently and takes out his laptop, and shows the website with possible MMS videos, and informs her that the people behind this crime might be the one running MMS rackets. Aparna becomes much worried, and sooner she calls the store manager to whom she refers to as uncle, and convinces him to come to the coffee shop where she was present and the one very close to his shop. The store manager comes to meet Aparna, and then looks at the website on Abhay’s laptop, and becomes puzzled after seeing it.