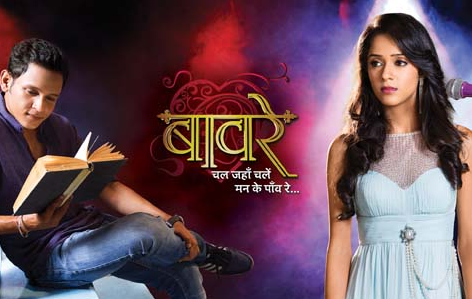 Nikumbh and Yamini, the poles apart couple are creating waves with their show Baawre. Nikumbh, the guy who has a brunt impact on everyone around him, very sharp, smart, ambitious, dreamer and a true art extractor. Yamini, the girl who is unable to defend even herself, less guts, always being scared, laid back seeing everyone around her, and basically an introvert. As we all know opposites attracts. Nikumbh has finally given the role of Shakuntala to Yamini in his play and wants to extract the best of her. While she says her lines fine, but he wants more emotions. They get late rehearsing and come to know of the riots in the city. Nikumbh insists Yamini that he will drop her home and takes her. To their surprise, they are stopped by some angry mob and run to hide in an artifacts shop.

They spend good time together where they talk about their childhood, families, ambitions, their fears and reason each other about their current steps. Nikumbh feels like he has not known the real Yamini behind her star status till now, and he was definitely having a wrong image of her. He regrets for accusing her of throwing star tantrums. He sees an innocent girl in her who has seen the world only by her dad’s eyes, who has always protected her and never let a wound touch her skin. Yamini too realizes that Nikumbh is not so bad as she felt, he has a good heart and he just acts rude sometimes.

Raghavendra who was going mad as Yamini did not turn up home, goes to seek Tripathi’s help. Luckily, Tripathi agrees to help him, and Raghavendra finds Yamini and Nikumbh. Raghavendra fumes on Nikumbh for his wrong step to take Yamini with him. Nikumbh feels Yamini should have defended him to her dad as she knew the truth how he has saved her, and how he lost his scooter too in the riots. Yamini keeps quiet and leaves. Nikumbh shares his feelings with Azam, his best friend. Nikumbh tells him that Yamini is completely the opposite of Shakuntala, as she is scared of everyone, whereas Shakuntala was a bold and daring woman who did anything to speak out the truth. He feels Yamini won’t be able to do justice with her role. He decides to fill confidence and boldness in Yamini so that she can relate to her character well.

He makes Yamini say the same lines numerous times, to extract the best art in her. Yamini atlast cries and just then Raghavendra enters seeing Yamini apologizing and crying to Nikumbh. He gets angry on Nikumbh again and asks Yamini who made her do this. But thankfully, Yamini defends Nikumbh. She tells Raghavendra was she was doing her act and he asks her to show it to him. Yamini says her lines perfectly this time, with all emotions, real tears, slow delivery, and very impactful. Nikumbh is much glad and tells Azam that this is what he wanted, a girl to face her problem on her own.

Nikumbh takes Yamini for a task, to make her more closer to Shakuntala. He asks her to buy a ring for the play which King Dushyant will be wearing, he brings her to Chor Bazaar, and gives her just Rs 200. She tells him that she has never gone out for shopping to such a place. He insists and stands with her as she looks at some rings but does not advice anything. He gets Azam’s call and goes out. The shopkeeper and their union start troubling Yamini seeing her alone and demanding Rs. 2000 for a ring. Yamini thinks of Nikumbh’s inspiring words and tackles all of them alone, by scaring them of MLA Tripathi. She succeeds to buy the same ring at Rs. 200 and is very happy. She leaves the shop and walks out. Nikumbh comes back and is tensed on not finding her. Nikumbh looks for her while a goon teases Yamini. Nikumbh gives Yamini a chance to manage on her own and she does it herself by protecting herself. Nikumbh finally succeeds in what he wanted, he now sees a Shakuntala in Yamini.

Azam’s love interest Shaheen, who is now a helping hand to Yamini, invites everyone for her sister’s engagement. Shaheen and Azam are still friends, but Azam wants her to accept his love. Shaheen has a very sweet smile which bowls him over. Later on, Nikumbh and Yamini dress up well and go in the party. While everyone knows the theatre director and the famous singer, they request them to entertain them and make it a competition. Nikumbh does his lovable Shayari where he speaks about the side effects of love and marriage. ‘Shaadi ka laddoo jo na nigal paaye aur na ugal paaye’ (Marriage’s laddoo which one can’t swallow and can’t spit) Everyone just love his style and his funny liners. Yamini entertains everyone with her singing skills by rendering a beautiful song. They woo the people and let’s see who wins the competition. Watch the show Baawre on Life Ok now only on one time slot @ 7 PM IST.