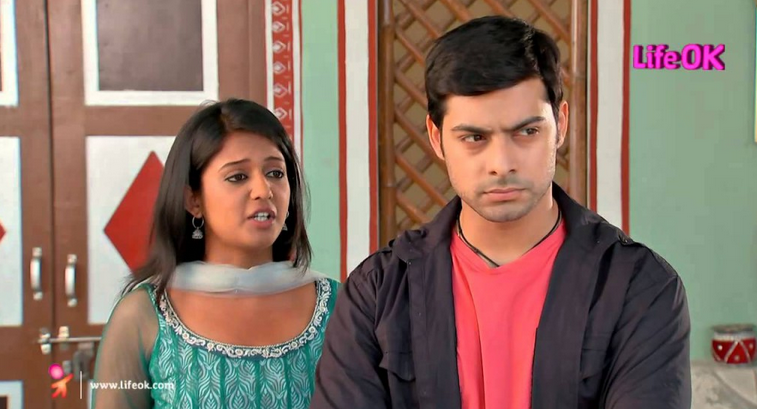 The twist in the show is finally out. Why did Sameer looked so much different? This is answered in the show. With Bebe and Meher’s pleas to the president to free Sameer from the neighboring country, Sameer got back to his Pind. This Sameer is serious, smart, hardworking, responsible, and does not keep a smile on his face. He is no more Pyjama Singh. While everyone was very happy seeing him back, Purab was shocked as he could not believe Sameer can return as he himself has shot him during the war. Purab started doubting Sameer’s identity and filled Meher’s ears against him, asking her to ask Sameer about their childhood moments, their friendship etc. Meher talks to Sameer and becomes sure that he is Sameer, as he answers every little thing to her, which happened between them.

Purab hears them talking and is shocked knowing Sameer remembers everything, then how could he forget that Purab has shot him. Purab goes on to find out, by trying to find the bullet mark on Sameer’s chest and its really there. Purab thus believes that this is really their Sameer, who lost his partial memory, and thankfully he is of no danger to him now. Bebe asks Sameer to say yes for marrying Meher, but Sameer makes it clear to Meher that he can’t marry her. Initially Meher was broken by his rude reply, and thought he is denying to marry her as he has become an army officer and now he feels she doesn’t deserve him.

But Sameer explains her the reason that the pain he went through in six months across the border, it has made his heart a stone and he does not wish to make her life cursed, by marrying her and not giving any happiness and his love to her. Meher understands him and offers a hand of friendship. Meher tells this to Purab which shocks him. Purab meets Sameer and asks him to be on his words of not marrying Meher, and he will sort out everything. Purab loves Meher a lot and is happy that Sameer himself has moved back now. Purab does not know that Nimmi is trying to fix him to Minty. Minty spends time with Purab and starts liking him. Nimmi thinks to take Minty’s proposal for Purab.

Its Meher’s birthday and Sameer does not remember it. The reason for this is, the man who returned as Sameer in Bebe’s house, is actually Iqbal (From Pakistan) who works for Malik (an army force enemy) and is on a mission to here Sartaj (terror head). Iqbal is trying hard to make everyone believe he is Sameer, then use Purab to go back in army camp and reach Sartaj through him. But winning Purab’s confidence is not an easy thing as Purab is really smart and is eyeing Iqbal’s every move. Sameer gets a message from Malik about Meher’s birthday and he pretends as if he was giving her a surprise, to make up that he did not know it. He takes Meher and their group of friends to amusement park and spend the day happily.

But a fate teller meets them and tells about Iqbal, who did not get his mum’s love all his life and really bad a miserable life. He tells Meher that this man is not the one who loves her, the man who really loves her is very far from her. Meher laughs off this and tells him that he is so much wrong, as Sameer is the one who loves her, and he is very lucky since birth as he got the best mum in this world, who loves him a lot. Iqbal recollects his bad childhood where he is beaten up by someone by a stick and he is shouting for his mum. He gets angry on Meher and then starts their journey of getting angry and making up.

Iqbal is getting Bebe’s love and is acknowledging it too. He gets tears in his eyes seeing Bebe crying for him, her concern which is so real, seeing what is mum’s love, and what he lost in his life. Later on, Iqbal saves Meher from a group of goons who were trying to take her purse to rob the cash which she was taking to deposit in the army widow fund office. Meher is stunned seeing Sameer’s bravery to fight with all of them alone. She comes home and tells his to Bebe and Purab. Purab does not care much about it and asks her to thank him for Sameer capable to do this, as he has sent him to army. Meher notices some changes in Sameer as she does not know he is Iqbal, but he manages to divert her easily.

Meher slips and falls on him and they have a sweet eyelock, then she closes her eyes and waits to be kissed by him. Iqbal gets deeper in her love and goes closer to her, but steps back as he realizes Meher is distracting him from his mission. Iqbal is losing his heart to Meher, by her lively nature, chattering talk, non stop lectures, funny taunts and her strong believe in him. Will Iqbal limit himself or fall in love ? Love has bitten him and no medicines can cure it now. The show is getting interesting. The real Sameer is not shown till now, we wish he comes back to Pind soon and we get to see some mind blowing high drama. Keep reading.