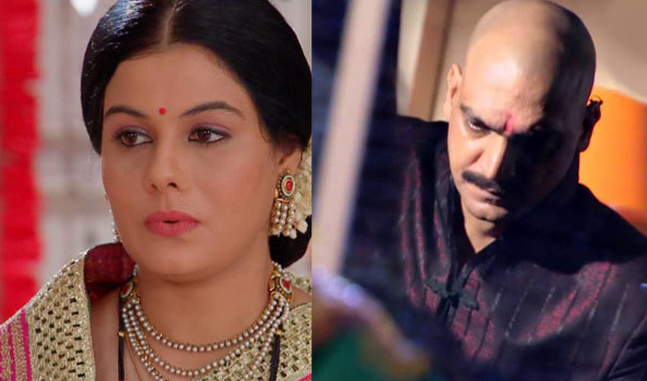 Niranjan calls up Anjali again the next day and gets his call not taken up. He calls on the home landline and Sojal takes the call. He asks her to give the phone to Anjali as he needs to talk to her. But Sojal informs him that Anjali is not at home, as she has went to Vridh Ashram with Astha, with lots of food, but they have already sent food this month. Our smarty baldy is not a fool to not understand this simple mystery. He fumes in anger and goes ahead to find out the reason for Anjali and Astha going to the Vrish Ashram. He goes to the Vridh Ashram to confirm his doubt on Anjali. He sees Anjali and Astha with other ladies. He gets angry but keeps super cool expressions in public. Anjali lies to him that she went went there to do some Daan Purn. Next morning, he asks Anjali to accompany him to Vridh Ashram, which shocks Anjali. He comes to know about Anjali secretly meeting her parents there, taking care of them, cooking their favorite sweets and making them happy. Niranjan can’t take this anymore, As his in laws were responsible for sending him to jail. He had to face so much shame and embarrassment because of them. He can’t forget this and can’t forgive them.

Niranjan decides to end this matter forever, by bringing Anjali’s parents back on the road, making them beg at temples and giving them the poorest life possible. He wants to hurt them by making them miserable. While Anjali knows how dangerous is Niranjan, Astha is still playing around. Niranjan talks to them face to face and as they try to hide everything from him, he surprises them by showing them the court notice of shutting the Vridh Ashram. Astha and Anjali are shocked. Anjali, as always, acts helpless, and depends on Astha. Astha decides to stop this at any cost. She will not be quiet and will definitely find a way, but will Anjali get strong to support her. Anjali too makes her mind to fight against injustice. We don’t think Niranjan will let Shlok get involved in this. How will Astha save the Vridh Ashram and Anjali’s parents from Niranjan’s anger? Keep reading.