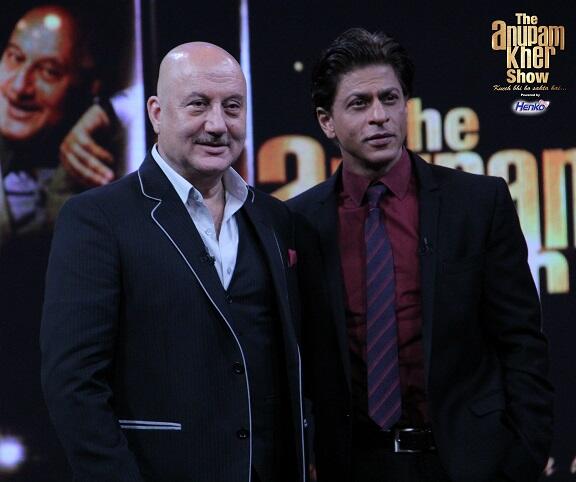 The Anupam Kher show has the format of a talk show with the veteran actor speaking candidly as well as posing tough questions. Actors, filmmakers. television and sports personalities are invited on his show. Guest on the show – Megastar Shah Rukh Khan for the 1st Episode.

The show is very much related to Anupam Kher’s autobiographical play – Kuchh Bhi Ho Sakta Hai. The play highlights his journey of life, and how he overcome his failures and obstacles and earn success. With this show, he will converse with celebrities on their failures, obstacles, persistence, and success and would also relate to his own experiences with failures and success. Anupam ji speaks that his show is not scripted, highlights aspirations,  and its based on positivity and truth. He calls the guests as his friends, and its not gossip whatever they speak is from their heart which will touch your heart as well.

In the promos, SRK is seen dressed in a suit with maroon coloured shirt and converses candidly with the show’s host Anupam Kher.

Anupam Ji: What does his father wanted him to become ?
SRK:  He speaks that his father never told him what to become since when he was just 15 years old when his father died. But he continues to remember couple of things which his father told him,
(1) Become one in which you have utmost interest and what your heart says.
(2) He was very close to his father and was like a friend to him. He speaks on his father’s words which said – Do work, and if you don’t do then that is also fine since who doesn’t do anything is also wonderful.

Anupam Ji: Shah Rukh, Do you sleep on your back or on your stomach ?
SRK: shares a witty line it depends with whom he sleeps after which both laughs.

Anupam Ji: Asks SRK that he wears flat and ironed Pyajamas so that whoever comes in his dreams he will be seen in good clothes ?
SRK: He will never wear Pyajamas. He wears shorts or tracks during his sleep. Furthermore, suggests that the person looks a bit fool when wears Pyajamas so he will never wear it. Anupam ji also speaks of not wearing Pyajamas since long time. Both of them gets a laugh.

Anupam Ji: speaks that one hand SRK was not getting work while he was in love with Gauri.
SRK: shares an anecdote about his brother-in law who advised him in a funny manner to not trouble his sister (no hanky-panky) again bringing laughter on both faces.

Anupam ji welcomes all and speaks that today’s guest (SRK) is an example of success, his achievements has been precious motivation for people in his own country and abroad. He has fulfilled all his dreams and calls SRK the luckiest person. Anupam ji adds the attributes – hardwork, mercy, confidence, courage are the ones which he owns is unmatched with others. He introduces SRK as the undisputed Baadshah of hindi movies and then King Khan. SRK comes and hugs Anupam ji.

Anupam Ji to SRK: Do you know Abdul Rahman ?

SRK: He doesn’t know anybody and then speaks that his maternal grandmother (Naani) has given him the name Abdul Rahman during his birth. She wanted his name to be Abdul Rahman and moreover he speaks that it was not registered. He then humorously speaks that if he used the same name and the movie Baazigar has introduced him with that name then it would not have matched well. SRK in and as Baazigar sounds better.

Anupam ji: speaks on SRK praying at a parking lot of the hospital when his mother was battling out for life, and suggests that he was praying so his mother will not pass away.
SRK: He was told that until he continue prayers, God will listen to him and will not take any action.

Anupam ji: Ask about his biggest fear ?
SRK: Ironically, in every movie he spreads both his hands (referring to his signature pose), and his fear is that someone will cut his hands from beneath.

SRK speaks that he felt very nice to come on Anupam ji’s show. He speaks that Anupam is a close friend. Moreover, SRK also reminds that when he came to Mumbai for first time he got able help from Anupam ji who encouraged him and gave him confidence. He regards his rendezvous with Anupam ji as one of the greatest moments of life and goes on to say that he is because of his friends like him. He offers his gratitude to Anupam ji for inviting him on his show and giving respect. Further, he adds that Anupam ji is older than him, taller, and more hair than him humorously. SRK wishes Colors and Anupam ji on the show from his heart and it was his duty to come on the show and signs off with his thanks. Stay tuned to The Anupam Kher Show on Colors every Sunday @ 8 PM.

Additional Notes:
* Anupam Kher was born on 7th march 1955. He has worked in 470 films till date and 100 plays. Apart from Bollywood, he has worked in Hollywood most notably the 2013 Oscar nominated movie – Silver Linings Playbook.
– Held the post of Chairman of the Censor Board and National School of Drama in India
– Honored with the Padma Shri in 2004 by the Government of India for his contribution to Indian cinema.
– Won the Filmfare Award for Best Performance in a Comic Role five times, more than any other actor. Upcoming movie: Humpty Sharma ki Dulhania (Varun Dhawan, Alia Bhatt). Read more at his Wikipedia page.

* After shooting with the veteran actor, SRK tweeted on Twitter,
– “It’s always nice to bare urself in front of people who have lived u unconditionally. Thanx Anupam for Kuch bhi ho sakta hai.”
* Veteran director and filmmaker Mahesh Bhatt have also echoed much appreciation for the show on Twitter.