Guests on the show: Actresses and Superstars Vidya Balan and Dia Mirza – the team of Bobby Jasoos.

Kapil starts the show and is seen reading the newspaper. He finds a news that a mastermind has been caught along with the fake notes. He then asks how come a mastermind can be caught ? He then finds another news that India has won the cricket world cup for the second time, and his musician informs him that the news is old. Bittu responds that even the newspaper is old so as to prove him right. Bittu taunts his musician humorously and asks him if he knew so much they why he is not playing and working in the music band of A.R. Rahman invoking a laughter.

Daadi comes on stage and informs him that she heard that he is planning for a robbery. Bittu agrees and seeks her blessings. She then asks him about his course of action and plans about the robbery. He informs that whoever goes on the road in front of their home he will be going to rob them. Daadi gives him handkerchiefs so as to cover their faces during their theft. Soon, a man walks passes by the road and Bittu shouts that his Daadi is dead and left him alone in the middle of the road. Daadi is seen lying on the road there on the stage. The man speaks that she would have died if his car hits her. Bittu then asks him where is your car, you are just alone.. Then the man replies what-if he would have brought his car, she would have come under his car wheels. Bittu then takes out a small knife and threatens the man but the man is undeterred and not feel afraid. The man speaks that he can give Bittu 500 INR if he touches his feet. Daadi readily agrees to do that and even Raju also comes there and agrees for the same.

The man speaks that he will not give them money and was just checking them to know their current status and got confirmation that they remained the same, and calls them Poor (Ghareeb). Sooner, Bittu identifies him as Ramu and Daadi informs that Ramu was their old servant. Ramu wants to bite Daadi’s ears very badly after which she covers her ears. Bittu asks him how does he accumulated so much gold since he was wearing gold necklaces ? Ramu speaks on going to Dubai and Bittu then gives him respect. Ramu sits on a sofa and speaks that he bought 1 square feet of land in Dubai and it gave him oil, and with that oil he started selling Pakodas. Raju suggests that he should have sold oil instead of pakodas. Bittu responds that everybody has oil there but not pakodas and then both bittu and Ramu refers to Raju as a mad person. Bittu sends Daadi and Raju away from there.

Sooner, Bua comes there and sits beside Ramu. Bittu asks Ramu about his reason for coming to India from Dubai so abruptly. Ramu informs Bittu that he came to take back 25,000 INR which bittu owed him, and he will not leave India until he gets back his money. Sooner, a beggar comes on stage and Ramu gives 1 Lakh INR to him just in that moment and gets blessings but Bittu and bua are shocked at Ramu’s gesture. Ramu warns to bring police by evening if he doesn’t get back his money and leaves. 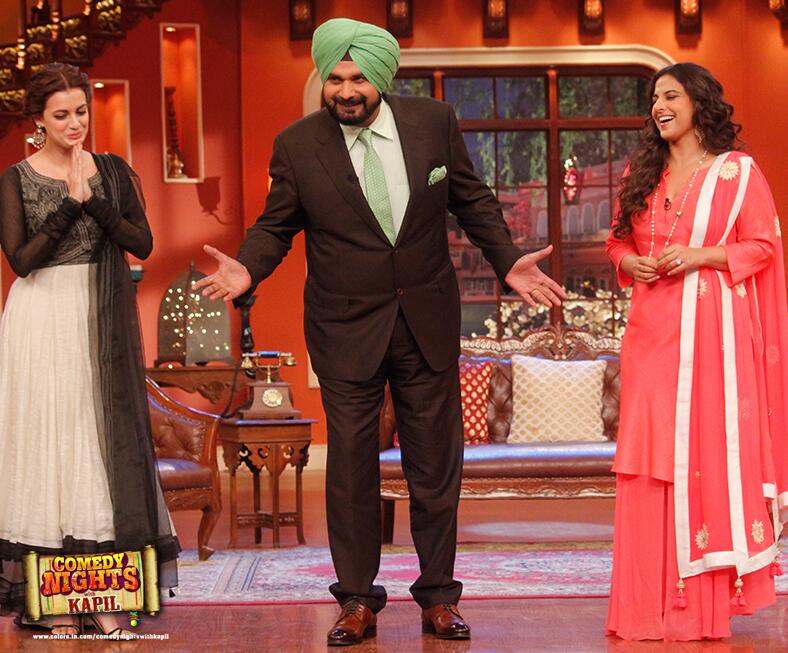 Siddhu speaks that now he will welcome the guests and then welcomes Vidya Balan and Dia Mirza. He calls them gorgeous and wonderful looking human beings. Bittu comes on stage and is seen in long hair and calls himself Ungli Baba who is an astrologer and can tell the future by just mere looking at the face. He then asks for Vidya’s hand, but she asks him that he just told to tell the future by looking at face, Isn’t right ? Bittu aka Ungli Baba speaks that as she did so much make-up on face so that her hands are also now immersed in it so can look at her face via hands invoking laughter. He speaks that she lives in a good building as her hands are so nice and also gets 24 hour water supply bringing more smiles. Sooner, Ramu comes on stage and speaks with Ungli baba that whether he knows his own future. He informs the girls that Ungli baba is Kapil and he is flirting them in the disguise of baba. Kapil is caught and he runs away.

After a while, Kapil comes on stage in his normal attire and Ramu leaves from there. Kapil speaks that he heard Vidya is a big fan of SRK and then wants to enact a scene from his movie. Kapil acts like Devdas and in drunken state and calls Paro and Chandramukhi. He asks to both of them about their love, and both reply that they love him. He then speaks that they actually love Kapil and Dev babu is just an excuse. 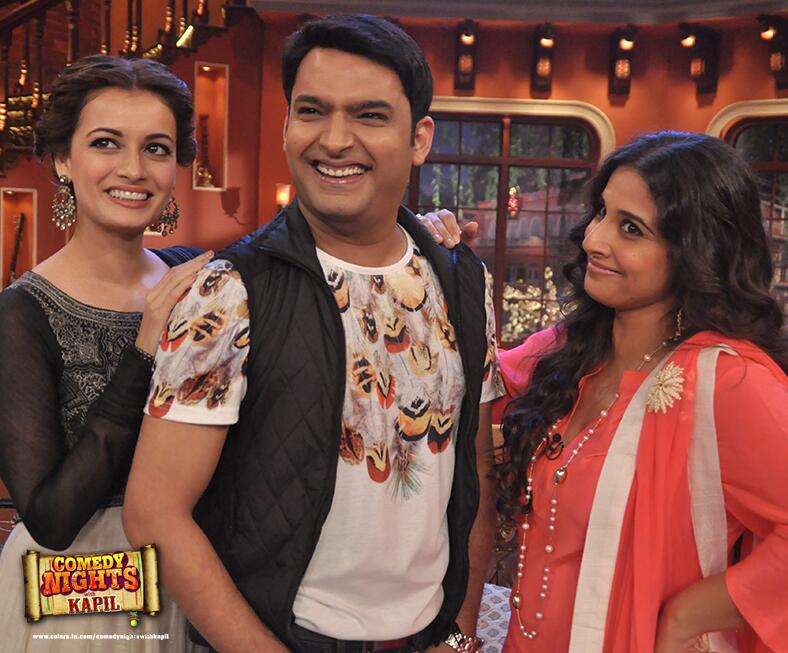 They speak that Dev Babu lives in their heart and then Dev Babu aka Bittu responds why Bansilal takes rent from him if he lives in their hearts bringing laughter. Vidya as Paro wants to beat Dev babu aka Bittu and soon Daadi comes in with a bang and comes with a small sheet so as to do Yoga. She wants people to do yoga and be fit. She first puts the sheet and then sleep for 2 hours to be fresh from last week’s yoga. She then sees Vidya and Dia and dances with them [Mauka Mila Ji Bhar Ke Jeelo.. song]. The show ends on happy note with Mrs. Bittu Sharma, Siddhu and rest of CNWK team on stage. Stay tuned to Comedy Nights with Kapil @ 10 PM. 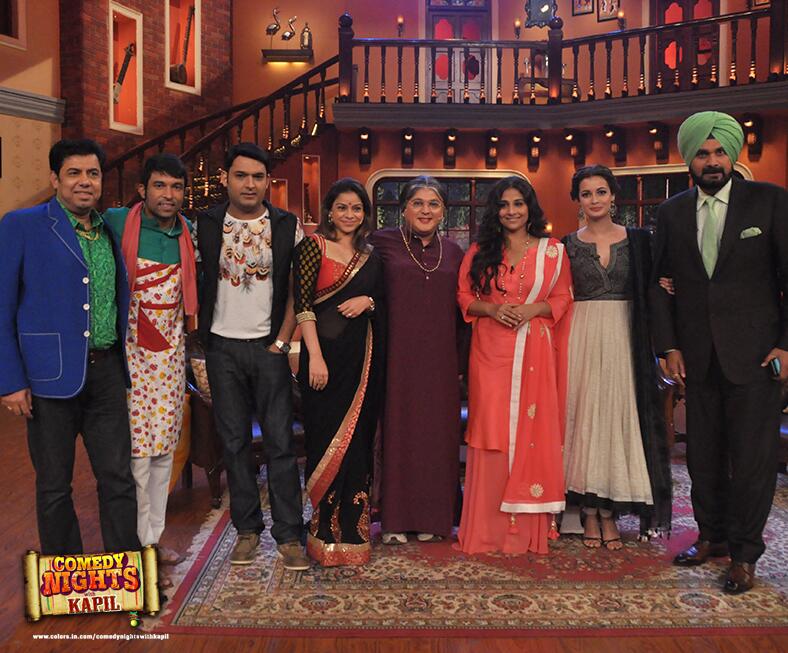