Prelude to Bhishma giving up his weapons
After getting enlightenment from Krishna, Bhishma has already prepared for his death. Soon, Bhishma meets Pandavas before the 10th day and informs them to kill him and follow their duties and also told them explictly to not be nervous during their attack. Furthermore, he does the following things:
* Bhishma vows to fulfill all the duties before his death and calls himself the man of justice but also speaks on his mistakes and gives his own death sentence and promises to die before sunset the next day (10th day).
*  Bhishma apologizes to Draupadi for his silence in the Yud Sabha. Draupadi at that time has given a curse to all those who kept silent which included Bhishma.  Bhishma speaks of getting salvation with his apology and quotes that – ‘Age is not counted by years, but by the amount of sacrifices’. He praises Draupadi for her sacrifices. Draupadi in turn forgives Bhishma.
* Bhishma gives his blessings to Pandavas and Draupadi – Ayushman Bhava and Vijay Bhava.

On the 10th Day of Mahabharat War, Bhishma giving up weapons
On the 10th day of war, Arjun and Pandavas give cover to Shikhandi and the pandavas’s army only goal is to make sure that Bhishma gives up his weapons before the sunset. On the other hand, Duryodhan wants to protect Bhishma. In the war, Drona fights with Arjun to keep him away, Ashwatthama and later Dushyasan engage battle with Shikhandi and Nakul comes to his rescue. Shakuni captures Shikhandi just 3 prahars away to sunset and stabs him in disguise after getting caught and then offers him to leave. Abhimanyu comes to Shikhandi’s rescue and takes to Pandavas’ camp for treatment. Draupadi after seeing her sister Shikhandini (Shikhandi for that day) tries to inspire him to go at the battlefield for Dharm Yudh victory.

Just before the sunset with 1/2 prahar remaining and after getting advice from Krishna, Arjun and other pandavas approaches Bhishma, while Duryodhan is stopped by Draupadi’s father Drupad. Bhishma requests Suryanarayan (God of Sun) to stop for some time and suggests Pandavas to not wait for Shikhandi (Devi Amba). Bhishma wants Pandavas to attack him together and speaks of him being enlightened from Krishna about Dharm, and equates their attack as form of charity for him. Pandavas’ with much sadness in their heart takes out their weapons, and fight but Bhishma overpowers them. On other end, Shikhandi comes on the battlefield somehow and is protected by Abhimanyu and Draupadi’s 5 sons from Shakuni and Ashwattama and their attacks becomes futile in stop him. Bhishma sees Shikhandi and gives up his bow and weapons as he had pledged to Devi Amba (Shikhandini’s earlier birth). Bhishma requests him for salvation and spreads his hands and submits himself.

Bhishma’s battered by Pandavas and lie down on a bed of arrows
Shikhandi hits the arrow at Bhishma first, and later on Pandavas one by one hits arrows at him. Pandavas remembers Bhishma words that is their duty to kill him and also their hands should not shiver in doing so while their heart might feel pain. Bhishma requests Arjun for Salvation and thereafter Arjun hits Bhishma with many arrows which makes Bhishma fell and lie down on the same arrows and is severely injured. The news of Bhishma’s downfall reaches Kunti, Gandhari and Draupadi and they all cry, and even Karna gets to know as well. Arjun laments on hitting Pitamah with arrows and thinks that he has killed his culture and even wished his eyesight would have gone during his attack. Bhishma responds that his life is useless and when Yudhishtir asked him about showing the path (Marg Darshan), Bhishma equates Dharm as the direction and mind to be gateway to that direction. He thinks that Pandavas are well equipped with truth and suggests them to not feel affectionate (Moh). Nakul and Sahadev wants to use their special herbs to save Bhishma’s life but he declines their offer. Krishna speaks that Pandavas are showering love instead of affection and wants Bhishma to accept it. He speaks that ones who are dedicated (Tapasya) also has the right to shower love. Duryodhan comes there and confronts Arjun after seeing Bhishma lying on a bed of arrows, and speaks that they have killed his family’s root and blames Yudhishtir’s lust for kingdom in attacking Bhishma.

Bhishma vows to not die until Pandavas’ prosperity and Hastinapur in safe hands, Dhritrashtra and Gandhari are in state of helplessness.
Bhishma wants Duryodhan to leave his anger since he needs both anger and strength the next day (11th day). At first, Duryodhan apologizes to Bhishma, and Bhishma informs him that he doesn’t have any hatred for him. At this time, Bhishma’s head gets support from other arrows of Arjun. Duryodhan seeks blessings of victory from bhishma but he declines. since he has already blessed Yudhishtir with victory and wants to be away from politics. Furthermore, he advises that Duryodhan at his death can accept Dharm and feel content and go to heaven or accept Adharm and get hell. After hearing it, Duryodhan curses Bhishma as the Suryanarayan is drifting the sun towards south and it is believed that person dying at that time will go to hell, and thus wishes hell for him and leaves with anger. Krishna informs Pandavas’ to not worry with Duryodhan’s curse since Bhishma has already taken the spot in heaven when he sacrificed his traditions and followed the path of Dharm (after getting enlightenment).  Bhishma equates pain as Ganga water for soul and regards it as purity and decides to rest down on arrows and wait for his death. He speaks that he will not die until Yudhishtir gets knowledge and position, Nakul and Sahadev (contentment), Arjun (respect) and Bheem (justice) and also wishes to see Hastinapur in good hands. 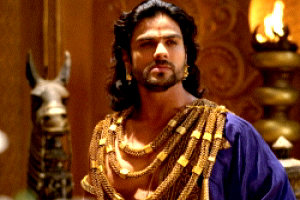 After seeing them in that situation, he will accept his death. Bhishma wants to be alone, and Pandavas takes his blessings by touching his feet and leaves. Krishna also showers his blessing for Bhishma. In Hastinapur, Vidur is completely shattered after the downfall of Bhishma and his condition, and informs the king Dhritrashtra that the might and wall of Hastinapur is broken. Dhritrashtra continues to blame Pandavas for attacking Bhishma and Hastinapur’s respect. Vidur is not convinced and opens up how Bhishma the oldest man in their assembly was insulted by his sons and forced to participate in the war at that age. Vidur speaks that he has relinquished his position of chief minister (Maha Mantri) at the start of the war and informs  Dhritrashtra that he is not serving him anymore.  Moreover gives his curse that the king will cry very dearly as his sons are going to die soon and Pandavas will emerge victorious. Gandhari also feels shattered on hearing Vidur’s curse and the king feels helpless.

Bhishma meets his mother Ganga and feels relieved
Pandavas’ and Draupadi feel pain and loss after going through Bhishma’s pain and condition. Arjun carries food, water, and herbs for Bhishma but he doesn’t accept them. Bhishma speaks on maintaining his body until Uttarayana (on this day he will leave to heavenly abode) and doesn’t want any help. As Bhishma is the son of Ganga, he requests Arjun to bring Ganga there at Kurukshetra which has became cruel due to bloodshed. Arjun fulfills the request and Ganga comes there while originating from water.  Bhishma apologizes to his mother for all his mistakes. She wants to take care of his son and admits that he is lucky to have his mother on his side at his old age and refers to him as a child.  Ganga cites that he was cruel during his stay at Hastinapur and she blames herself for his behavior since he was born without any weakness. She reiterates that if he had some weakness then he would have provided support to other weak people and guide them to fight and provide strength. Bhishma calls his mother the purest in the world, and she also calls him as pure and moreover she speaks of coming for his salvation (mukti). She wants him to sacrifice and forget both his good and bad works, and just want him to become a man of knowledge. Additionally, if someone wants his knowledge, he should give up as well, and thereafter she will take him inside her (river Ganga). She speaks on waiting for his rebirth post his death in this generation. Bhishma is relieved and feels that his lifelong thirst is gone. Thus, with Bhishma not participating in the war, Karna can join the army and support Duryodhan.

Additional Note:
* Prahar is a unit of time with 1 prahar is equivalent to 3 hours. Thus, a day is divided into 8 prahars. Read more on Prahar at its Wikipedia page.

* Uttarayana is the day in Mahabharat when Pitamah Bhishma chose to leave for his heavenly abode.  The young Bhishma Devaratha was granted a boon which make him choose his time of death and he chooses this day when the sun starts its course towards the northern hemisphere and is also considered auspicious.