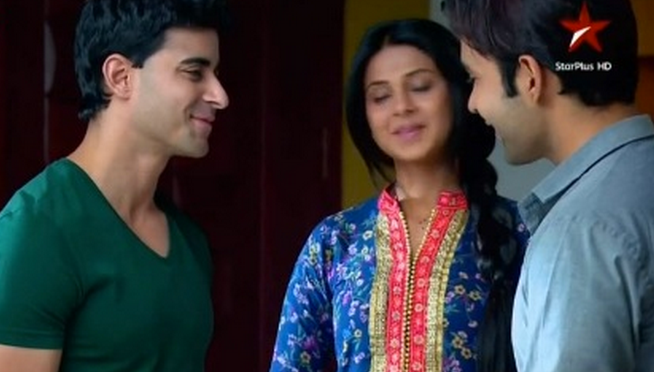 Prashant has exchanged the deo spray with a chemical one, which made Saras faint instantly the moment he smelled it. Kumud was shocked and rushed him to the hospital, with the help of Prashant. He wants to get closer to her and acts sweet as if he has much concern for her. He is really glad seeing Saras in such state. But Saras gets conscious the next day and hugs Kumud, wiping her tears. She brings him back home and is much thankful to Prashant. Prashant wants to play the game face to face now as it will be really challenging.

He has created many misunderstandings between them but that led to no harm to their marriage, so Prashant goes all out to talk to Saras and openly tell him about how much he desires to get Kumud in his arms, and love her. He describes her beauty, by talking about her hair, eyes and even her lips. Saras is shocked knowing what a creep he is and beats him up losing his temper. Saras gets angry on Prashant. Prashant starts acting goody goody to Kumud and wants to show Saras’ jealousy for no reason.

Saras decides to find out the reason behing Prashant’s obsession for Kumud. He comes to know about a girl who used to live in the Prashant’s flat in which they are living now, and she went missing one day by some unknown happenings. Saras meets her friend, who comes to meet her thinking she still lives her. Saras finds out her name Pooja and is stunned seeing her pic, that she is just like Kumud. Saras now understands Prashant’s madness and makes a plan to safeguard Kumud from his dirty lusty eyes.

Saras doubts on the wall mystery too and thinks there is something Prashant is hiding. We hope Saras soon recovers Pooja’s body from the wall and sends Prashant to jail. Well, all this story will take some time to be shown, so keep watching the show and keep reading on TellyReviews.