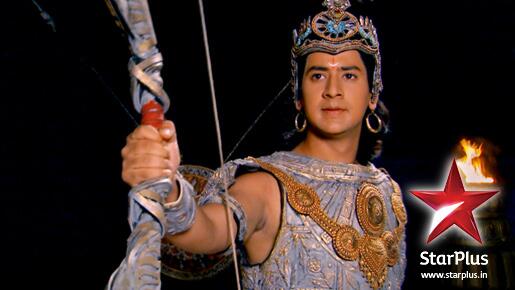 Drona informs that in order to defeat Pandavas, their lamp (prakash) needs to be taken away. Shakuni informs Drona, Duryodhan and Karna that Abhimanyu -the son of Arjun and Subhadra is the one who should be killed first. Abhimanyu enters the Chakravyuh military formation (wheel or discus shape) set by Drona. He enters into it with full vigor and shows valiant character in killing kauravas soldiers. However, it is noted that Abhimanyu has the knowledge of only entering the Chakravyuh and didn’t learn how to exit the formation.

Abhimanyu learnt the entry part from his father Arjun while he was still unborn and living in his mother’s womb. Abhimanyu will enter the Chakravyuh on the 13th day of the Mahabharat war since Arjun was fighting and kept busy by Susharma, the king who has pledged to kill Arjun or die and other king (Pragjyotisha). Moreover, other Pandavas were unable to break the chakravyuh. Thus, he enters into it and in the process kills hundreds of kauravas soldiers and also one of the sons of Duryodhan. Duryodhan goes into a state of vengeance, and orders his men and other kauravas warriors to take the life of Abhimanyu. This is against the rule of the Mahabharat war since a warrior needs to fight with his equivalent warrior. Nonetheless, Duryodhan and his allies with shrewd strategist Shakuni always changed the rules and followed Adharm.

Earlier, Drona was not willing to participate in the war on 11th day as he was sidelined from commander position by Duryodhan.  He even wanted to seek his salvation by not going into the battlefield but forced his father by reminding him of his promise which he gave to his wife in protecting his son. Though Drona has called his son shameful but decided to participate in the war and even took an oath to kill Pandavas and its allies in the war. Thus, it can be seen that a major cause of Abhimanyu’s death was presence of Drona on the battlefield and his vow to kill Pandavas.