Jhalak Dikhhla Jaa 7 is in the fifth week on Colors, The theme of this week is Jhalak Talkies/Bollywood Movie Special.

Manish and Ranvir starts the show and welcomes all to Jhalak Talkies and thereafter both contestants and judges are seen dancing on the stage on song Tumhe hi Zindagi Tumhi ho Bandhu Sada Tumhi from the movie Cocktail. Ranvir welcomes the first wildcard entry singer Rahul Vaidya on Jhalak’s stage. Rahul speaks that he has danced for fun and enjoyment earlier but now on Jhalak he has to perform and need to practice a lot.

* Ashish Sharma dances with his partner Shampa in a  green attire on the song Jiya Jaina Jaina O Re piya song. He dances sensually with her.
– Dance form: Freestyle
– Karan speaks that the dance was poetic and like fluid and also the song was good.
– Remo speaks that the concept is good and wishes them good luck.

* Shakti Mohan dances with her partner Tushar effortlessly on the Delhi wale girlfriend song.
– Dance form: Latin Freestyle
– Karan speaks that she brought the party spirit in her dance.
– Madhuri speaks that she has just given a killed it (maar dala in hindi) performance and praises her a lot.
– Score: 29/30

* Sukhwinder Singh dances with his partner and dressed as Bhagat Singh, and he regards that dance as a tribute to the Shaheed Bhagat Singh.

* Mouni Roy dances with her partner Punit suavely while also acting since their dance sequence has story, emotions along with dance. She dances on the song Kabhi Jo Badal Barse..They even carry guns as props in their dance.
– Dance form: Freestyle
– Remo speaks that her performance is perfect as it has story, emotions and acting with dance and they danced according to the theme classical drama and specially compliments her opening step.
– Madhuri speaks to Mouni that she puts lots of emotions in her dance because of which her dance looks much graceful and its a wholesome performance and dance.
– Score: 30/30

* Tara-Jean Popowich , the winner of Season Two of Canada’s So You Think You Can Dance comes on stage and dances on a remix version of Jai Ho song. Ranvir asks her how does she feel about the competition ? She responds that all the contestants are wonderful and she will work hard as much as she can. She loves India and also Manish after he jokingly asks her about him.

* RJ Malishka comes on stage and with lots of exuberance welcomes Manish and all.  She speaks of loving everybody and specially the judges. Moreover, she is fond of judges since they don’t dance on stage and only contestants perform and sings Da Da Thin Tha.. tune. She requests for a dance with Madhuri and her request is graciously accepted by Madhuri and sooner both dances together on stage on the song Tamma Tamma Loge.

* Kushal Punjabi comes on stage and dances on the song English Dhumke…Make Some nose. Desi Boyz from the movie Desi Boyz.
– Palak intervenes and talks with Kushal. She wants him to do pushups and Kushal then starts to do pushups on stage while Palak does the counting. After counting 5, she sits on his back making him fall.

* Kainaat Arora is a Bollywood actress and was seen in a recent movie Grand Masti comes on stage and dances on the song I am testing you..

* Akriti Kakkar is a singer. She comes on stage and dances on the song Marjaani Marjaani from the movie Billu Barber
– Sooner, both Kainaat and Akriti are welcomed by Madhuri and she speaks they are really wild cats. She speaks that the competition is tough from Jhalak contestants. Akriti then sings Saturday Saturday song.

Developments regarding contestants:
* Sukhwinder Singh got eliminated from Jhalak.
* Akshat Singh wins the performance of the week.
* The wildcard contestants will give their performance next week and the judges will choose 3 out of the 6 contestants.
* Score card at the end of 5th Week 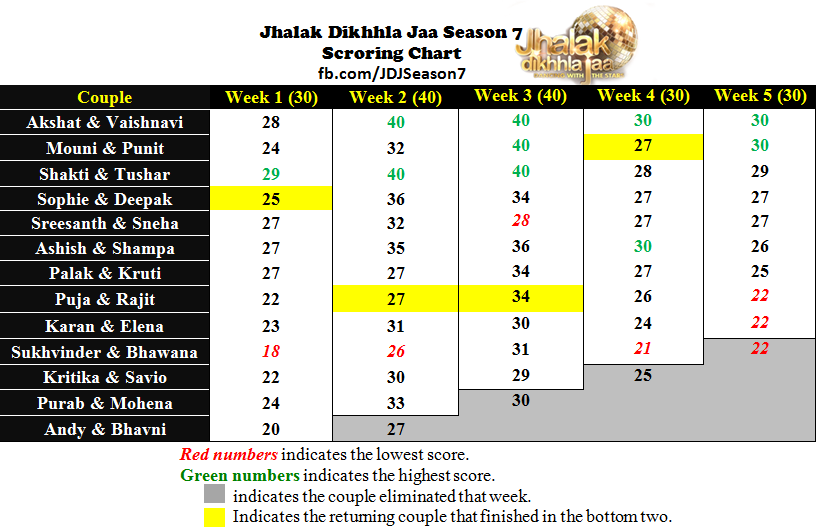 Additional Note:
* Motu Patlu is animated TV series with theme – comedy, humor and farce and telecast on Nicklodeon India in different languages – Hindi, English, Tamil, Telugu. Other characters are Ghasita Ram, Dr.Jhatka , Inspector Chingum. It has started in October 2012 and continues until present. Read more at the show’s Wikipedia page.