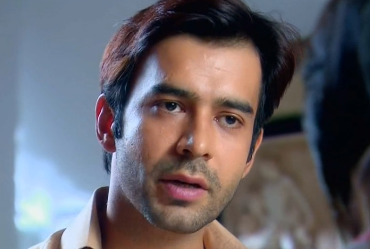 Saras has got into big problem this time. First, he was beaten up by Prashant and his friend Mahesh, fell unconscious and now he has been locked in a godown being tied. While Saras is much worried for Kumud and takes her name, he has the villain by his side, who sits to give him company and tells his lust stories to Saras, that he has for Kumud. Saras gets angry but is helpless as his hands and legs are tied. Poor Saras can just shout on Prashant. Kumud is worried for Saras, as she saw him going in his car and went home to wait for him, as he does not return, her worry goes high and she calls up Badimaa, who also senses Saras to be in trouble. Kumud and Badimaa pray for Saras to return soon.

Meanwhile, Prashant is glad to remove the thorn in his and Kumud’s love story, which is just one sided from his side. Stupid man should know what’s love first, as he has killed his girlfriend Pooja too. He feels Kumud will fall on his shoulders to cry and seek his support to find Saras, and he will then make her fall for his goodness, which is fake. Prashant takes Saras’s phone and messages Kumud from Saras’ side that he is upset and stressed out, so going far from her to be alone for some time. Kumud is worried and cries waiting for Saras to come back. Prashant is overconfident and does not know what a hero can do. Well, Saras will definitely come back with a bang, and save his darling wifey from the evil Prashant. Keep reading.