Recap/Preview: Freyan, a divorced women is being harassed to sell her appartment. She wishes to not sell it since she has the memories of her young daughter who died at very young age. She gets harassed from neighbor’s son Aditya and his mother Priya even has questioned her character, and starts to malign her name in the society. Sooner, Freyan finds herself alone and even the society people puts a notice advising people to not attend her dance classes and calls her husband stealer. Nobody wants to speak with her and only wants to harass more since only couple of weeks are left to the builder’s offer to buy the entire society at a very high price. The society’s people only intention is that she agrees to sell her appt so they will be much profitable with builder’s offer.

Theme of the Episode : Fight against Sexual Harassment (Physical or Mental); Fight for your self-respect and dignity; Respect single mothers or divorced women

Freyan comes out and sits inside her car and finds some condom stickers close to her car’s wipers. She comes out and throws them away and begins to cry. Aditya and Bilal see her in tears and thinks on counting her days in the society. Freyan speaks with Heroes team that people were questioning her character and they were using bad words. She speaks that people are doing all such things to embarass her so that she will feel harassed and then sell her appartment. She cries in her room and soon the electricity goes away. She carries the torch and comes out of her flat to see the entire society has the electricity except her flat. She goes to the fuse section of the society and finds her flat’s fuse to be deliberately taken away. After finding the fuse cover on the ground, she puts it back and reconnects the fuse. As she comes back to her appt, at the door she finds written – Husband stealer, get out in red ink. She begins to cry and feels dejected.

Next day, she meets the society people and asks them to inform her about the people who has harassed her by their writing at the door. Aditya’s mother Priya suggests her to leave the appt so as to not face such problems and wants her to sell the appt and buy a new one at a different place. She speaks that they just cared about their profits and money and here a women is being harassed and don’t feel anything for her. In a teary voice, she speaks that her daughter’s memories are there in her appt and she sees her daughter’s shadow in every corner of her home. She has already lost her daughter and asks them whether she will loose her daughter’s memories as well.  Priya then asks Freyan while her husband Baman has left her after their daughter’s death, Isn’t he loves his daughter ? She then speaks that Baman – freyan’s husband has left her because he might have known of his wife’s affair with other men, and then questions her character.

Freyan remembers how her husband Baman has left her after their daughter’s death. Baman used to come home after drinking a lot and used to slap her. He was doing the same for three months. After three months, on one night he comes home, slaps her and informs that their daughter has died because of her negligence. After blaming her, he leaves the appt and wants her to stay in it with her daughter’s memories. Freyan cried a lot at that time. Priya also speaks that Freyan’s Zumba dance classes are meant to attract men towards her. Freyan replies that a while back even she used to attend her classes and she speaks that all their attitude has changed and all have lust for money. She wants them to harass her as much as they want, and informs them that only 1 week left for the builder’s deal expiry, and then speaks out loudly that she will not sell her appt and informs all the people there. Aditya and Bilal becomes worried after hearing Freyan’s words. She wants them to harass her more or even kill her but she will not sell her appt.

As she was standing on her terrace, Aditya and Bilal comes in a drunken state, and Aditya speaks of coming there to harass her since she has affairs with other men and suggests that she should feel ashamed. He speaks that his parents will not believe her words if she informs them about their harassment . He speaks in doing such thing because she has forced him to do so by not listening to the society’s demands. He begins to close her mouth and physically abusing her, but at first frees herself from them. She falls down and again Aditya gets holds of her and wants to abuse her. Sooner, Hinal comes to her rescue and both boys run from there. Hinal suggests her to inform the society first and then the police. Freyan cries and speaks that the society will think that she herself has tried to seduced the boys. Hinal speaks that there are witness to the abuse which includes herself and her boyfriend Shekhar.  Freyan reminds to her that she is the second most unpopular person in the society. She begins to speak of not staying in the society but Hinal wants to help her in tackling the society and the people.

Next day, Aditya’s father who is the president of the society informs the society people that the meeting has been organized since Freyan has told him that she is ready to sell her appt but wants to speak with them once. Aditya, Bilal and Priya are happy with this development. Freyan comes there and informs them that she spoke a lie to call for this meeting and she is not going to sell her appt and even doesn’t have any plans. She introduces Hinal and also informs that though they knew that she works in media industry but they don’t know that she works in a newspaper as well. Freyan speaks that she has already informed Hinal of all the harassment meted out to her by the society people and in two days from now there will be a news article about the same matter. In a teary voice, she speaks that they have harassed her because she is a single mother and if she has a family and husband then would have not done anything to her.

Moroever, being a single women will make people think that she is after other men but that’s not the case and speaks to Kunal’s wife Rashmi that she doesn’t have any affair with him. She admits to having call him for some tea as they were friends and nothing else. Kunal looks at Priya who was the one that seeded and put in other’s ear about bad character of Freyan. She speaks that the people’s mentality are wrong, and then speaks of knowing sexual harassment as the one in which women is being harassed physically but after seeing their behavior she came to know of a different dimension of sexual harassment. She speaks that of maligning a women’s character or harassing her mentally because of the gender is actually sexual harassment. She speaks that not one but a group was part of the harassment. Priya first apologizes to Freyan, and wants the article to not be published. Freyan speaks that its too late and also wants the article to be published because only after then they will realize their mistake. Furthermore, she informs Priya that her son Aditya has sexually harassed and molested her yesterday along with his friend Bilal.

Priya becomes angry on hearing it and thinks of it as rubbish. Hinal comes in and informs Priya that she is a witness and actually the one who has stopped the abuse, and even her friend is another witness. Aditya bows down his head in shame as his mother stares at him. Freyan again reiterates that only for some money all these things have happened to her and asks them – How do they live with such a thing ?  She then goes and slaps Aditya and informs him that she didn’t report to police so as to not destroy his future and on the contrary Aditya was always saying that she will destroy his future. Freyan speaks that the news article was published soon and the society felt shame. Even the builder has withdrawn his offer for purchasing the society, and Priya and her husband didn’t face her next time. She speaks of getting support from an unlikely partner Hinal in that situation who gave her strength and hope. Both of them fought together and taught a tough lesson to the society. 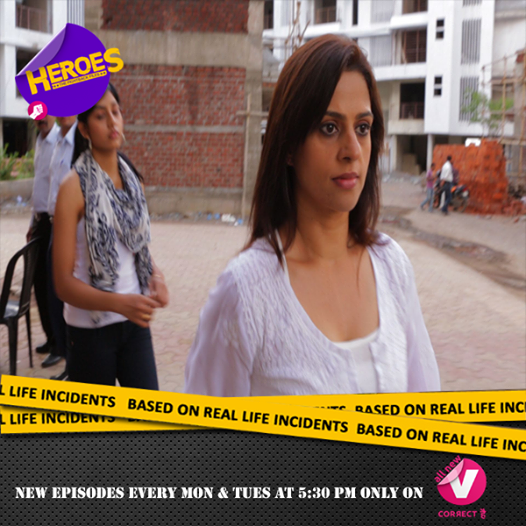