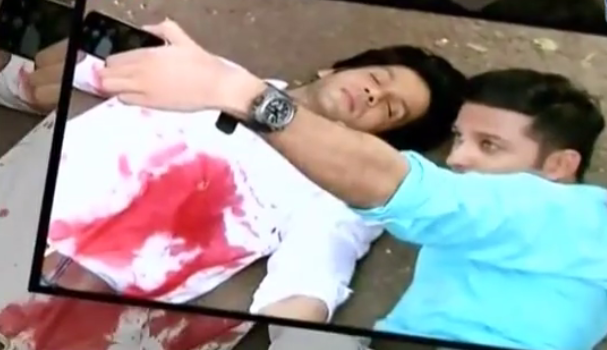 Durga gets worried when she get informed by Akash about Dev meeting with a deadly accident as assumes by Suchitra hearing his scream. Durga just wishes Dev is safe and later on Akash informs her that Dev got little hurt and is safe. She thanks Lord for saving Dev and Dayal sees her feelings connected to Dev still in her heart. Durga goes to meet Dev to see him, and he tells her that he has lost some valuable thing at the accident site. The police do not allow him to go there and stops him, but Dev breaks through the barrier and gets in there close to the valley end. Durga asks him what is he looking for, what’s more precious than his life.

Dev finds Nitya’s gifted locket and she is shocked to see Dev preserving Nitya’s locket and hugging it, as if he loves Nitya and believes in her. She is stunned seeing this side of Dev, as she always felt Dev did wrong with Nitya by not supporting her. She thinks who is real Dev, the one who backed off from friendship for his family, or this Dev who risked his life to get Nitya’s souvenir. She gets confused and comes home to discuss with Dayal. Dayal tells her that he always felt Dev is not a bad human being, and maybe there are some misunderstanding, as her judgment about Dev is wrong. Durga too starts thinking the same now, as she is angry on Dev, but still cares for him.

Shaurya, on the other hand, hires a professional international shooter to kill Dev. He wishes this time Dev surely dies. He meets the lady shooter from abroad who he paid a lot to call her in Kolkata. Shaurya and his friends stop Dev by putting a tree on the road, and Dev stops his car. While he gets out of the car, the lady shooter shoots at him and downs Dev with three bullets. Shaurya is glad seeing Dev dead and comes to him to take his selfie with Dev. Will Durga run to Dev this time, knowing he is innocent and did not cheat her. Will Dev get saved? Shaurya leaves from that place seeing Dev dead and being satisfied that no one can come between him and Durga now. We just wish to see this to be Shaurya’s imagination and Dev safe as ever.

Meanwhile, Shekhar informs Sakshi that he found out that Dayal’s daughter Durga was hospitalized and was critical two years ago in USA. Sakshi asks him to find out what happened to her after that. Durga comes to know Shekhar is finding about her and meets him to openly challenge him to find out her truth and prove it to Sakshi that she is not Durga Thakur. Shekhar is shocked. Durga says in 24 hours, Sakshi will kick you out from here, and that’s my promise. Durga plans to teach Shekhar a lesson as she has stuck his photo too on her revenge wall board. Let’s see how Durga manages Shekhar and Shaurya, and save Dev from losing his life. Many challenges for Durga ahead, the track is going to be thrilling. Keep reading.