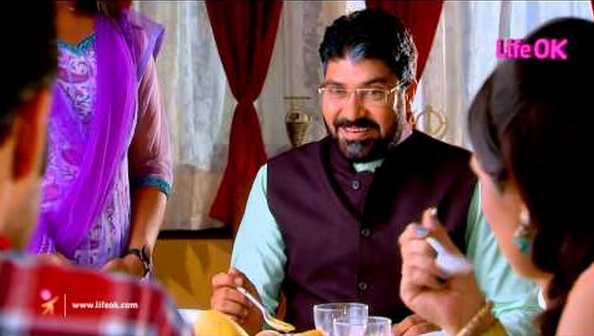 Iqbal has finally accepted his feelings for Meher, from which he was running away knowing Malik is really dangerous and can kill Meher too. He was controlling himself as Meher was diverting him from his mission. He tried hard to keep her away but Meher did not leave him till she made him learn to be happy and forget all the bitter memories he had before. Iqbal feels Sameer was very lucky to get a daring, loving and fighter mother like Bebe and a good friend like Meher. He has now taken Sameer’s place in their lives and never want to lose them. He visits the Dargah to share his thoughts with Allah, but Baba hears him and talks to him about Maalik – Allah, but Iqbal and Maseeta thinks he is talking about Malik.

Maseeta stabs Baba thinking he knows about Malik Sir and the mission. Iqbal runs to save him. Meher walks in the Dargah and sees Maseeta stabbing Baba. Maseeta sees Iqbal and names him, just before running. Meher hears the name Iqbal. Meher and Iqbal (for her he is Sameer) rush Baba to the hospital and try to save his life. Purab comes to know about his incident and doubts Sameer knowing how could he not save Baba, as he loves him a lot, and being an army officer, he would have easily beaten up that man. Maseeta informs Malik that he has stabbed Baba and Meher has seen him. Meher names Iqbal to the police asking them to find out. Maseeta is angry as Meher becomes a witness and has seen his face. Malik asks him to kill Meher and Baba.

Maseeta kidnaps Meher and takes away to kill her. Purab and Iqbal rush there as Meher shouts Sameer. Purab aims his gun at Maseeta and asks him to leave Meher. Iqbal thinks if Maseeta gets caught alive, their mission will be in danger, so he goes ahead and kills Maseeta. He says he did this to save Meher, and he really loves her and can’t see anyone hurting her. Purab is angry as he has lost the answers he would have got from Maseeta. He gets his phone and comes to know he has his helper in Pind and doubts its Sameer, who is working for neighboring country.

Purab questions Sameer and Meher about the incident and makes Sameer enact everything. He asks him why did Maseeta take Iqbal’s name, and doubts that Sameer is Iqbal. As Purab is sure that real Sameer would have died by his bullet when he shot him in the war mission. Purab feels this Sameer is a traitor who is working against them. Malik comes to know that Iqbal killed Maseeta and is taken by the police for interrogation. Iqbal who is now loving Meher more than his life, takes good care of her and she dances happily seeing him reciprocate her feelings.

Malik walks in Bebe’s home as Mangal’s old friend. He meets Meher and says he met her when she was 5 years old and now she has grown up. Meher greets him happily. Malik sees Bebe and recognizes her as Atwal’s wife, whom he met years ago and also ate food at her home, when Mr. Atwal invited him for dinner. He says he regrets knowing about Atwal’s death. Malik says he has long association with them, and knows Sameer/Iqbal since he was in Bebe’s womb. He meets Iqbal saying he would have to respect him if he has to see Meher happy. He talks to Iqbal indirectly and Iqbal gets tensed seeing Malik come himself just for such a petty thing. Iqbal decides to protect Meher and Bebe.

Iqbal calls Malik at night and asks him to meet him somewhere where no one will see them. Malik agrees. Iqbal leaves on his bike and Purab sees him going. Purab follows him as make his doubt confirmed that this is not Sameer, but Iqbal, a traitor in Sameer’s disguise. Malik waits to discuss his next plan with Iqbal. Will Purab catch Iqbal and Malik red handed? There is so much happening in the show, suspense, thrill, love, passion, duties, cheat, romance……….. The list goes on. Nadaan Parindey is truly rocking these days with super impactful performances by the actors, hats off to the cast of the show. Watch the show on Life Ok or keep reading here!!